Combat at the tower of joy

According to a semi-canon source,[3][4] Prince Rhaegar Targaryen kept Lyanna Stark at the tower of joy after her abduction near Harrenhal.[5] During Robert's Rebellion, King Aerys II Targaryen sent Gerold Hightower, Lord Commander of the Kingsguard, to retrieve Rhaegar. The prince returned to the crownlands, but left Gerold, Ser Arthur Dayne, and Ser Oswell Whent to guard Lyanna at the tower.[4]

After the Sack of King's Landing, Lord Eddard Stark rode south to lift the siege of Storm's End. Lords Mace Tyrell and Paxter Redwyne quickly dipped their banners.[2] After Storm's End, Eddard rode south to the Red Mountains of Dorne.

According to his fever dream, Eddard traveled to the tower of joy with six northern companions: Howland Reed, Lord Willam Dustin, Ethan Glover, Martyn Cassel, Theo Wull, and Ser Mark Ryswell. They approached the tower to recover Eddard's sister, Lyanna, but found the tower protected by Gerold, Arthur, and Oswell of the Kingsguard. Eddard recalls that he and Howland were the only survivors of the ensuing conflict.[2]

According to a semi-canon source, Eddard found Lyanna dying in the tower,[3] in a room smelling of blood and roses.[6] She claimed a promise from her brother before she died, and Howland removed Ned's hand from hers.[6] Afterwards, Eddard pulled stones from the tower to make eight cairns for the dead combatants.[2]

Eddard returned Arthur's sword, Dawn, to Starfall, the seat of House Dayne.[7] Arthur's sister, Ashara Dayne, threw herself into the Summer Sea.[8] While Ned had been upset with King Robert I Baratheon after the Sack of King's Landing, the death of Lyanna reconciled the old friends.[9]

Eddard returned Lyanna's remains to the north so she could be buried with her brother, Brandon, and her father, Lord Rickard.[2] While traditionally only lords or kings are honored with statues in the crypts of Winterfell, Ned commissioned statues for Brandon and Lyanna as exceptions.[10]

Servants at Winterfell whisper that Ned defeated Arthur, the Sword of the Morning, in single combat.[7] When Bran Stark was little, Ned told his son he would have died if not for Howland.[11]

While under the influence of the milk of the poppy, taken because of his broken leg,[12] Lord Eddard Stark has a fevered dream of the incident.[2]

Lady Barbrey Dustin, the widow of Lord Willam Dustin, resents that Ned brought Willam's red stallion back, but not the remains of Willam himself.[13] 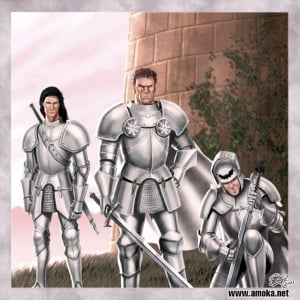 Ned's wraiths moved up beside him, with shadow swords in hand. They were seven against three.[2]

The finest knight I ever saw was Ser Arthur Dayne, who fought with a blade called Dawn, forged from the heart of a fallen star. They called him the Sword of the Morning, and he would have killed me but for Howland Reed.[11]