Conflict beyond the Wall

From A Wiki of Ice and Fire
(Redirected from Conflict Beyond the Wall)
Jump to: navigation, search

The conflict beyond the Wall takes place north of the Wall, the mightiest and oldest defensive structure constructed by men. Its main purpose was to shield the realms of men against the return of the Others, a race who emerged during the Long Night. Since then, the Night's Watch has stood guard for about 8,000 years, defending Westeros from threats from beyond the Wall. During that time, its initial task has generally been forgotten and instead they have been guarding against the human free folk (or wildlings) who hold the lands beyond. Occasionally forming raiding parties, the wildlings consistently try to cross the Wall into the richer and warmer lands to the south or to escape the unknown terrors of the far north.

The main events of this three-sided conflict that take place in the far north of the Seven Kingdoms and are thus unknown or considered unimportant to the majority of its population, especially with the War of the Five Kings ravaging through the country.

Before the War of Conquest by Aegon I Targaryen, the Night's Watch boasted nineteen castles along the hundred leagues of the Wall, accounting over ten thousand men at arms with Castle Black quartering five thousand fighting men with all their horses, servants, and equipment. Its power has dwindled during the last 300 years; by the reign of King Robert I Baratheon, the Watch only manages to sustain three castles: Castle Black, located in the middle of the Wall with about six hundred men; the Shadow Tower at the west of the Wall overlooking the mountains, with about two hundred men; and the coastal Eastwatch-by-the-Sea with even fewer men. A bare third of them are fighting men.

The 997th Lord Commander of the Night's Watch, Jeor Mormont, is deeply concerned by the declining power of the Watch, and the rising threat of the wildlings beyond the Wall, whose raids have increased on the people south of the wall in recent years. He tries to make it more difficult for the wildlings to know their comings and goings by using a more random system, varying the number of patrols and the days of their departure. Sometimes a larger force is sent to one of the abandoned castles for a fortnight or a moon's turn.

The King-Beyond-the Wall and the Great Ranging

Even before the beginning of Robert's Rebellion, Mance Rayder, the King-Beyond-the-Wall, was gathering wildling forces around him in an attempt to stave off attacks from the Others and recover the Horn of Winter. The Horn was needed as a fail-safe against the Night's Watch, as it was reputed in legend to be able to bring down the entire Wall with a single sounding. While most thought that the Horn was just a myth, Mance believed not only that it was real but that he could find it, deep in the frozen mountains known as the Frostfangs.

After the disappearance of a group of rangers led by Ser Waymar Royce,[1] a second group led by First Ranger Benjen Stark goes north to find their missing Brothers and discover what is becoming of all the wildlings. After the subsequent disappearance of this second group, and the continued realignment of known wildling population centers, Lord Commander Jeor Mormont organizes a great ranging of over 300 Brothers and leads them north to an ancient settlement near the Skirling Pass, east of the Frostfangs, called the Fist of the First Men.[2][3]

While Lord Commander Mormont leads his small army north, several groups are dispatched by the Watch to scout ahead. One of these groups is led by Qhorin Halfhand, a senior ranger and the second in command of the Night's Watch western-most castle, the Shadow Tower. Accompanied by three other rangers and Jon Snow, a bastard of House Stark, the Halfhand discovers a vast wildling host deep in the Frostfangs. The group is trapped by wildling forces and either killed or goes missing one by one until only the Halfhand and Jon Snow remain. At this point, to ensure that someone survives to bring word back to the Lord Commander, Qhorin Halfhand allows Snow to slay him in a duel, thereby earning Snow the trust of the wildlings. With the destruction of the Halfhand's party, and Snow's inability to escape in time, the Lord Commander receives no warning of the wildling host's purpose or composition, now numbering over a hundred thousand.

The Half-Hand and the Fight at the Fist

Main article: Fight at the Fist

After the Night's Watch encamp on the Fist, a debate ensues among the Watch's leadership as to what the best course of action is to deal with the wildling threat. Some, such as Thoren Smallwood, advocate attacking the wildling host along its line of march. The argument is decided to be the best course of action by the lord commander, who proceeds to convince his men to the plan. It proves useless as the following night the group is attacked by a force of wights. The Watch has some initial success with flaming arrows and spear walls, but the massive waves of wights overcome the Watch's defenses. Realizing that his position is untenable and remaining on the Fist would result in the overrunning and ultimate destruction of his forces, Lord Commander Mormont orders the Brothers to attempt a breakout of their encircled position. Once mounted, the Brothers form a wedge and managed to fight their way off the Fist.

Mormont's savaged forces manage to make a long march through the snow-covered wilderness to Craster's Keep, a wildling estate known to the Brothers to be friendly to the Watch. The Watch is harried and harassed all through the night as they make their retreat, and by the time that they reach Craster's Keep less than one hundred Brothers remain of the original force. It is here, desperate and angry at their situation, that a group of Brothers rebeld and murder not only Craster but Lord Commander Mormont as well. A small group of loyalists manage to escape the mutiny at Craster's Keep and make their way back to the Wall, bringing news of the disastrous expedition's fate.

The Battles at Castle Black, the Bridge of Skulls, and beneath the Wall 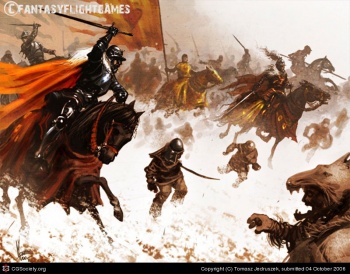 Main articles: Attack on Castle Black, Fight at the Bridge of Skulls, and Battle beneath the Wall

Mance Rayder, now knowing that the bulk of the Watch's fighting forces have been wiped out on the Fist by their mutual enemy, makes his way out of the Frostfangs and starts his march toward the Wall. Mance forms a plan to divert the remaining fighting men from both Castle Black and the Shadow Tower to the far west so he can send a team to scale the Wall and take the unwalled Castle Black from behind by surprise. With his diversionary force riding hard for the west, Lord Steward Bowen Marsh marshals his forces and takes the bait, leaving only the old, the green, and the sickly behind to defend Castle Black.

Mance's attempt to take Castle Black from behind by surprise fails, as Styr's Thenns are defeated. Mance assembles his host and assaults the Wall for several days. King Stannis Baratheon, who had landed at Eastwatch-by-the-Sea, takes Mance's army in the flank, routing it utterly and capturing Mance himself. 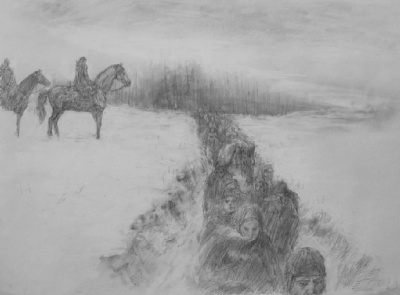 The free folk march to the Wall - by Marc Fishman ©

With King Stannis Baratheon at the Wall, Mance Rayder in irons, and Lord Commander Jeor Mormont dead, along with most of the senior Brothers killed at the Fist or the Gorge, the Night's Watch is left in a precarious position of having to not only elect a new Lord Commander but also preserve their political neutrality. After a contested election between Lord Denys Mallister of the Shadow Tower, Cotter Pyke of Eastwatch, and Lord Janos Slynt, Jon Snow's name is placed as a compromise that both Mallister and Pyke can agree upon. The political maneuvers of Samwell Tarly securing Mallister's and Pyke's support (to prevent Slynt, who both agreed would make a bad Lord Commander, from being voted in) and some fortunate election night events result in Jon Snow becoming the 998th Lord Commander of the Night's Watch. Jon attempts to make an alliance between the Watch and the wildlings so they can fight their common enemy, the Others.

Jon means to garrison the abandoned waycastles, restore patrols on the Wall, and establish a line of beacon towers along the top of the Wall, until they have more maesters and ravens. Jon also asks the free folk to help man the Wall.

According to a letter sent to the wall by Ramsay Bolton, the army of Stannis has been defeated and Stannis killed. When the letter is received at the Wall, Jon decides to ride south to meet the Bastard of Bolton in the field of battle, and several wildlings join him. Bowen Marsh and several of his followers, however, fearing that the neutrality of the Night's Watch is being threatened by their Lord Commander's actions, stab Jon several times. It is unknown if he has survived the mutiny at Castle Black.[4]