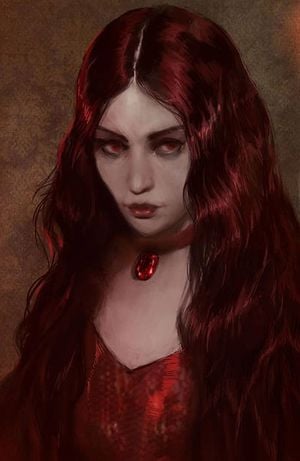 Copper is a red-orange base metal, which may have a green patina. See also copper in the real world. The color "copper" refers to a reddish brown. Bronze is an alloy made of copper and tin.

In Essos, copper is plentiful in the Ghiscari hills near Meereen, where slaves mine it.[1][2] Copper was also mined beneath the Fourteen Flames in Valyria.[3] In Westeros, beyond the Wall, Thenns mine copper and tin in their valley to create bronze.[4]

Copper is used as the material for some coins in Westeros, such as copper stars, pennies, half-pennies, and groats.[17][18][19]

Copper is one of the metals used by maesters for their chains; the subject it represents is uncertain, but may be history. The ring, mask, and rod of Archmaester Perestan, the historian, are made of copper.[20] Grand Maester Pycelle, Maester Luwin, and the acolytes Armen and Alleras have links of copper.[21][22][23]

According to semi-canon sources, the coat of arms of Houses Shermer and Foote both feature objects made of copper.[24][25]

When riding the dragon Meleys, Princess Rhaenys Targaryen donned steel and copper armor that flashed in the sun.[5]

Dornishmen use a lot of copper in their armor, but mainly for ornamental purposes, as it shines in the sun beautifully, but is less expensive than gold.[6][26] Prince Oberyn Martell owns a gilded helm displaying a copper sun on its brow,[6][27] and a round steel shield with the sun-and-spear sigil of House Martell in red gold, yellow gold, white gold, and copper.[27] Like her father, Obara Sand owns a round steel and copper shield.[8] She also wears a belt of copper suns.[28] Nymeria Sand owns a great cream and copper-colored silk cape.[8] Arianne Martell owns a band with copper suns,[8] an ornate snake bracelet with copper and gold scales,[29] as well as a copper helm.[30] Quentyn Martell owns a belt ornamented by a line of copper suns.[16] Areo Hotah wears a shirt of copper scales, with a billowing cloak of dun-and-yellow sandsilk to keep the sun off the copper.[8]

Marwyn has a copper kettle in his chambers at the Citadel.[31]

Coppersmith's Wynd is a street in King's Landing.[32]

"Counting coppers" is a pejorative used by King Robert I Baratheon to describe the management of the treasury of the realm and the position of master of coin.[33][34][21][35] Randyll Tarly also uses it when he describes Petyr Baelish to Brienne of Tarth.[36]

Pennytree is named for a huge old oak tree that grows by the duck pond, to which hundreds of copper pennies have been nailed.[37]

The Palace of Truth in Braavos is topped with green copper domes.[38][39]

The camel-riding guards of the city of Qarth wear scaled copper armor, and snouted helms with copper tusks. The city's outer gates are banded with copper.[40]

Some dragons have copper coloring. The claws, crest, and horns of Meleys, the Red Queen, were as bright as copper.[5] Tessarion, while mostly blue, had claws and crest and belly scales the color of bright beaten copper.[52]

The Valyrians of Old Valyria used slaves to mine the ores beneath the Fourteen Flames, which included copper.[3]

Steely Pate only asks Ser Duncan the Tall for a copper for the repair of his shield, in gratitude for Dunk's rescue of Tanselle.[53]

Haggon once traded with the Night's Watch men of Eastwatch-by-the-Sea; a dozen strings of amber and a sled piled high with pelts, for six skins of wine, a block of salt, and a copper kettle.[13]

In his childhood, Ser Davos Seaworth begged for coppers in Flea Bottom.[54]

The stableboy who took care of Lord Jon Arryn's horse always received a copper coin from him on his name day.[55]

According to Varys, the mother of one of King Robert's bastards had copper hair.[56]

Catelyn Stark gives a copper to the two men who carried her things to an old inn halfway up Visenya's hill.[57]

Daenerys Targaryen receives a big heavy copper tub as one of her wedding gifts.[9][58]

The guards at the Western Market of Vaes Dothrak wear copper helmets.[7]

A pushcart man in King's Landing asks Arya Stark for three coppers for a lemon. The pot shops of the city offer a fistful of coppers in exchange of a litter of pups.[59]

Donal Noye compares Renly Baratheon to copper, saying both he and copper are "bright and shiny, pretty to look at but not worth all that much at the end of the day".[60]

Yoren gives a few coppers to smallfolk from Briarwhite.[61]

Dobber takes the four coppers he finds in the purse of a dead man.[62]

The price of food in King's Landing remains high after the Battle of the Blackwater. For example, a melon costs six coppers.[64]

Copper pennies are used to cast votes for the election of the new Lord Commander of the Night's Watch.[65][66]

Alleras buys Mollander, Roone, and Pate a round of cider at the Quill and Tankard to celebrate his new copper link.[23]

Brienne of Tarth pays the villagers of a fishing village a few coppers to allow her companions to sleep in a hay barn.[19]

While walking in his camp, Ser Jaime Lannister sees Raff the Sweetling and another man-at-arms playing with two washerwomen; he bets a copper coin on Raff but loses.[67]

A coppersmith gives Daenerys Targaryen a suit of burnished rings to wear to war.[1]

Before the battle begins, Ser Archibald Yronwood sees King Cleon on his horse outside Astapor. Both Cleon and his horse wear suits of copper scale.[68]