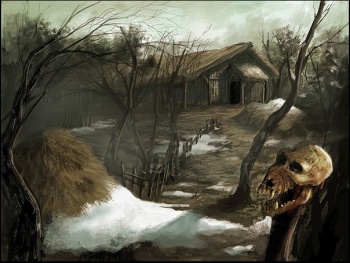 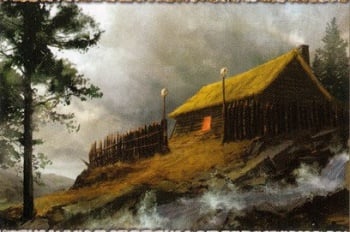 Craster's Keep is the home of Craster, an ornery wildling beyond the Wall who is a friend to the Night's Watch. It is not an actual keep, but is only given that title by members of the Watch.

Craster's Keep sits in the haunted forest atop a low hill with an earthen dike around it. There is at least one gate on the southwest side of the compound and a stream runs around the north end of the hill. The gate is decorated with the skulls of a bear and a ram. Inside the dike, there is also a midden heap, a pigsty and a sheepfold.[1]

The keep itself is a daub-and-wattle hall that is long and low, made with logs and roofed with sod and big enough to hold thirty to fifty men at best. The door to the hall is made of two flaps of deer hide. The windowless hall is a single room, with a sleeping loft above reached by a pair of splintery ladders. Only Craster has a chair inside, and all others sit on the benches. There is a firepit in the center of the dirt floor, and dogs run around.[1] There is also a cellar.[2]

Ghost, the direwolf of Jon Snow, scares the pregnant Gilly when he kills a rabbit.[1]

Plotting to mutiny against the Lord Commander, Chett decides he will claim Craster's Keep and wives for himself. His plans are interrupted by the fight at the Fist, however, and forty-four survivors of the Fist reach Craster's Keep.[3][2] Four die from their wounds, however, including Bannen, whose body is burned. There are no attacks by wights or Others during their stay, and a number of black brothers practice archery in Craster's yard.[2]

Clubfoot Karl and Garth of Oldtown believe that Craster is keeping food in a secret larder. During the feast before the Night's Watch are to leave, Craster and Lord Commander Mormont are killed in the mutiny at Craster's Keep. The mutineers gorge in Craster's cellar and rape his wives.[2]

The betrayers from the Night's Watch reside at Craster's Keep.[4]

During Bran Stark's journey north through the haunted forest to the cave of the three-eyed crow, Coldhands kills a small group of foes from the Night's Watch.[5]

Samwell: What's his castle like?
Jon: A midden heap with a roof and a firepit.[1]

Your uncle could tell you of the times Craster's Keep made the difference between life and death for our rangers.[1]

Crows. When did a black bird ever bring good to a man's hall, I ask you? Never. Never.[2]