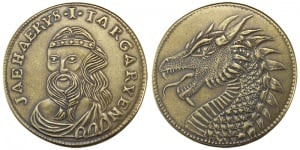 Depiction of a gold dragon of King Jaehaerys I Targaryen, by Tom Maringer © Shire Post Mint 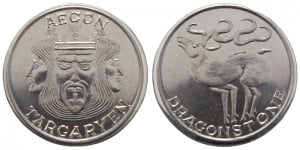 Depiction of a silver stag of King Aegon I Targaryen, by Tom Maringer © Shire Post Mint

Currency is money in a form circulated as a medium of exchange.[1] Thus far, no society in the known world has been described as using paper currency (though the currency of every region has not been described in detail). Most societies use currency in the form of coins made from precious metals such as gold, silver, or copper (with a few notable exceptions, such as the iron coins used in Braavos). Coins are mostly used by merchants and nobles, though the poorest of the smallfolk will at times still resort to barter.

Contracts written on parchment or paper can also accepted as payment, though these are not "currency" as such: for example, the brotherhood without banners gives commoners notes promising to pay them for supplies they took after the War of the Five Kings ends.[2] Similarly, Tyrion Lannister draws up contracts promising to pay the Second Sons with gold from Casterly Rock in return for their aid in restoring him to his lordship of it.[3] 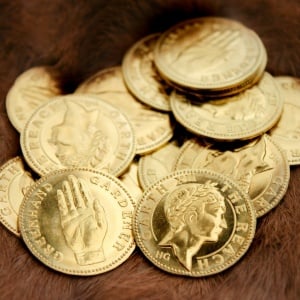 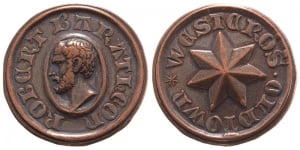 Depiction of a copper star of King Robert I Baratheon, by Tom Maringer © Shire Post Mint
Initially it was created as a copper penny, but the coin ended up being too large and heavy for a penny and George R. R. Martin changed it to a star.[5]

Prior to Aegon's Conquest, each of the Seven Kingdoms had their own coinage minted by their respective kings.[4] The Kingdom of the Reach had gold coins known as "hands", which featured the hand-shaped sigil of House Gardener on one side and the face of a king on the other. Gold hand coins are smaller and thinner than gold dragons, roughly half their weight and value.[6][7]

The current currency was established shortly after the unification of the Seven Kingdoms following Aegon's Conquest and was used through the whole Targaryen rule and continued after Robert's Rebellion. In order from high to low value, respectively, these are golden dragons,[8] silver stags,[9] copper stars, pennies, half-pennies, and groats.[10][11][12] The non-(semi)canon A Song of Ice and Fire Roleplaying includes another coin, silver moon,[13] reference to such a coin existing at least before the conquest is the silver moon of Tommen II Lannister made by license by the shire point mint.[14] Golden dragons are more frequently used by rich merchants and noble lords and ladies. Smallfolk, who do not have such riches, tend to exchange copper and silver coins, or turn to trade. The minting of the coins, exchange rates, and like matters are overseen by the master of coin.[15][16]

The king's coinage is one of the most visible manifestations of royal authority. Golden dragons bear the face of the king in whose time they were minted in, as well as his name.[17] On the other side, the golden dragon displays the three-headed Targaryen dragon. The silver stags are known for the stag they bear. Note, they were not minted for the Baratheon dynasty only, but had already been in use during the Targaryen reign.[17] Silver stags were used in the stormlands before Aegon's Conquest, whereas silver moons were used in the Vale. After the Conquest, the Targaryens co-opted them as denominations within their new unified currency system.[18] According to semi-canon source, copper stars usually bear the seven-pointed star associated with the Faith of the Seven.[19]

King Viserys II Targaryen introduced a new royal mint during his reign.[20] During the First Blackfyre Rebellion, Daemon I Blackfyre had his own coins minted, depicting his own face on one side, and a three-headed dragon on the other.[21] The officers of three mints were appointed by the master of coin, Petyr Baelish.[15] White Harbor in the north contains the Old Mint.[22] During the War of the Five Kings, Lord Wyman Manderly suggests his seat of White Harbor as a location where King Robb Stark can mint his own coinage.[23]

Specific exchange rates between each denomination of gold dragon coin have not yet been mentioned in any of the (semi)-canon works of A Song of Ice and Fire. The non-(semi)canon A Song of Ice and Fire Roleplaying game by Green Ronin, which did not receive any input from Martin, placed the relative values of the coins as represented in the following table (though it also cautioned to use these as a rule of thumb, because exchange rates between different metals might vary over time):

The relative value of the gold dragon coin and its denominations has changed over time, due to various economic fluctuations of inflation and deflation (e.g., war-time versus times of peace, failed harvests, etc.). For example, when House Tyrell had cut off the food supply to King's Landing from the Reach during the War of the Five Kings, food prices in the city rose steeply.[15] Another example is that in 209 AC, a time of peace and plenty, Duncan the Tall received more than three gold dragons for his palfrey, but during the War of the Five Kings, both Brienne of Tarth[26] and Tom of Sevenstreams[27] consider one gold dragon to be a fair price for a horse in the war-struck riverlands.

During the Targaryen Dynasty:

The lands north of The Wall are harsh lands, and the free folk inhabiting those lands usually barter for goods amongst themselves based upon the needs of the parties involved.[citation needed] The free folk have been known to trade with the brothers of the Night's Watch as well,[42] and smugglers, with whom they exchange goods in the little coves on the eastern coast along the Shivering Sea. They take steel weapons and armor in return for furs, ivory, amber, and obsidian and have little use for coins.[43]

The Dothraki neither buy nor sell[44][45] and do not really comprehend it.[46] Buying and selling is considered to be unmanly.[47] Trade is allowed in the sacred city Vaes Dothrak, where, by the leave of the dosh khaleen, merchants and traders gather to exchange goods and gold,[47] though they mostly trade with each other, and little with the Dothraki themselves.[48]

Despite the common saying that Dothraki do not sell,[49][50] the Dothraki do sell their captives on occasion to the Slaver Cities.[51] They call these slaves "gifts", and in return receive gifts from the slavers.[50] Giving and receiving gifts is the common way of Dothraki for doing trade.[49][50][45] However, giving a gift in return might not always occur immediately upon receiving a gift.[52]

Coins of the Free Cities, as depicted by Nutchapol Thitinunthakorn in The World of Ice & Fire:
Top (left to right): Braavos, Pentos, Lys, Myr, Tyrosh
Bottom (left to right): Volantis (front and back), Norvos, Qohor, Lorath.

Each of the Nine Free Cities has its own bank, and some have more than one. The Iron Bank of Braavos is richer and more powerful than all the rest combined.[53]

For Astapor, Yunkai, and Meereen, the three Slaver Cities located in Slaver's Bay, slaves are their main trade as well. Slaves are bred and trained to perform all the work of daily life. As such, the economy of these cities is based on this slave labor. In many of the Free Cities, slave trade is also a large part of the economy. The Free City of Lys, for example, is well-known for training bed slaves for pillow houses. The major exception is Braavos, where slavery is forbidden.

Each of these cities use their own coinage. It is unknown how they relate to one another in value. Braavosi use square iron coins,[54][55], while Lyseni coins are oval in shape and have a naked woman stamped on them.[54] Volantis employs honors, which are little coins no larger than a penny. These coins have a crown on one side, and a skull on the other.[56][54]

From the Slaver Cities, Meereenese coins include honors,[44] while the Yunkai'i use golden marks which are stamped with a stepped pyramid on one side and the harpy of Ghis on the other.[57] Astapor uses silver marks.[58] At the slave auction held the Yunkai'i hold outside the walls of Meereen, the prices are determined in silver pieces.[59]

Other coins, for which no region is specified, have ships, elephants, or goats[N 2] depicted on them.[54]

I am fond of coins. Is there any sound as sweet as the clink of gold on gold?[49]

Half the lords in the realm could not tell taxation from tyranny, and would bolt to the nearest usurper in a heartbeat if it would save them a clipped copper.[61]