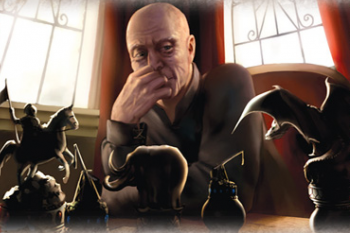 Cyvasse is a game played by two players and features ten types of pieces, each with different powers and attributes.

Cyvasse is played on a board which changes from game to game. The players arrange the tiles on the board, with a screen in the middle, so neither can see how the other arranges their board. Among the squares that the players can place themselves, are mountains.[1] In turn, the players move their pieces across the board.[2] In Volantis there are cyvasse parlors.[3]

According to George R. R. Martin, cyvasse is complex and profound but he has not come up with rules for the game.[4] There are ten different pieces available:[2]

The dragon is the most powerful piece in the game.[5] It is not exactly known how many pieces each player has of each different kind, but one player has multiple elephants.[5] The goal of the game is to "kill" the king.[5]

Known color combinations of pieces include ivory and onyx,[7] ivory and jade,[9] and alabaster and onyx.[5] Squares of the game board can be colored jade, carnelian, and lapis lazuli.[2] Cheaper sets are carved from wood.[6]

Several rules are briefly mentioned in A Song of Ice and Fire:

Cyvasse originates from Volantis.[2][10] Ben Plumm learned the game when Volantis contracted the Second Sons.[10] Cyvasse is frequently played in Lys[9] and Volantis.[5]

Around 299 AC, the game came to Westeros, starting in Dorne, where a trading galley from Volantis introduced the game. It was spread from Planky Town up and down the Greenblood by the orphans of the river.[2] The game came to King's Landing in 300 AC.[11] 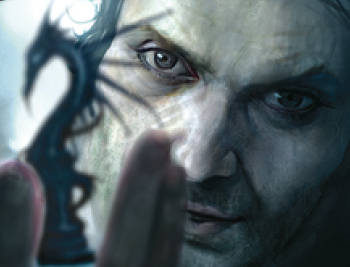 Cyvasse is a craze among the court at Sunspear. Princess Myrcella Baratheon learns the game from her betrothed, Prince Trystane Martell, when she comes to live with him in Dorne.[2] She takes to the game quickly, and wins more often that Trystane, though he does not seem to mind.[2] Ser Arys Oakheart finds the game maddening.[2] When riding through the desert with Princess Arianne Martell, Myrcella comments that Trystane always places his squares the same way.[1]

When Arianne is imprisoned in a chamber in the Spear Tower for her failed attempt at kidnapping Myrcella, she finds that her father Doran Martell, the Prince of Dorne, has had a cyvasse table placed there. She ignores it, but he later tells her it was there to teach her to study a game before she attempts to play it. When Arianne is summoned to her father's rooms at the end of her imprisonment, she finds him sitting across a cyvasse table, studying the pieces. He hands her an onyx dragon piece as he explains the secret marriage pact between House Martell and House Targaryen.[7]

In King's Landing, Queen Margaery Tyrell and her cousins are studying the game when Queen Regent Cersei Lannister brings the news that Ser Loras Tyrell has taken Dragonstone but received severe injuries in the process.[11] 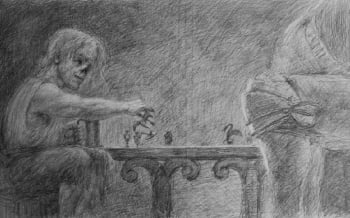 While is in Lys, Prince Quentyn Martell spots cyvasse pieces being sold.[9]

Cyvasse is played during Tyrion Lannister's voyage on the Shy Maid with Haldon[6] and Young Griff, and he learns the game.[5] While playing against Haldon, Tyrion places a bet, and wins the game, thereby learning from Haldon the true identity of Young Griff. In the game against Young Griff, Tyrion tells the boy to go to Westeros, instead of seeking the hand of Queen Daenerys Targaryen. Later on, when he is separated from Young Griff's group, Tyrion learns that Young Griff actually listened.[3] Tyrion, under Haldon's direction, plays against the custom officer Qavo Nogarys in Volantis, in order to gain information from him.[5]

On board the Selaesori Qhoran, Tyrion attempts to teach Penny how to play cyvasse, though he soon realizes it is a lost cause.[8] When Tyrion is enslaved and displayed on the slave market, he boasts about his cyvasse skills as a selling point.[10] After Tyrion is bought by Yezzan zo Qaggaz, he plays a game of cyvasse against a man who had originally wanted to buy him (and remembered his claims), and later against Ben Plumm.[10]

In the camp of the Second Sons outside Meereen, Tyrion plays numerous cyvasse games in Brown Ben Plumm's tent. As the second siege of Meereen commences, a Yunkish nobleman enters Brown Ben's tent during a meeting. When he recognizes Tyrion, he demands that the dwarf be surrendered for punishment. Jorah Mormont opens the Yunkish nobleman's throat with his longsword. The man takes two wobbly steps, falls across the cyvasse board, scatters the wooden armies everywhere, and dies on the carpet. The white dragon piece ends up at Tyrion's feet. He scoops it off the carpet and wipes it on his sleeve, but some of the man's blood has collected in the fine grooves of the carving, so the pale wood appears to be veined with red.[12]

Arianne Martell, on her way to Jon Connington, loses in games of cyvasse against Ser Daemon Sand and Ser Garibald Shells.[13]

Cyvasse, the game was called. It had come to the Planky Town on a trading galley from Volantis, and the orphans had spread it up and down the Greenblood. The Dornish court was mad for it. Ser Arys just found it maddening.[2]

I hope Your Grace will pardon me. Your king is trapped. Death in four.[5]

You have other pieces beside the dragon, princess. Try moving them sometime.[13]

—Daemon Sand, mocking Arianne Martell after she loses to him

According to George R. R. Martin, cyvasse is partially inspired by chess, Blitzkrieg, and Stratego.[14] Martin has turned down offers from game companies to develop rules for cyvasse and market the game, as he prefers to have the profundity and complexity of the game more suggested than detailed.[4]

According to David J. Peterson, the official language creator for the television adaptations of Martin's works, the etymology of the word "cyvasse" comes from the High Valyrian word "kȳvanon" which means "strategy".[15]