Daella Targaryen (daughter of Jaehaerys I)

From A Wiki of Ice and Fire
Jump to: navigation, search
For other characters of the same name, see Daella Targaryen

Princess Daella Targaryen was the eighth born child of King Jaehaerys I Targaryen and Queen Alysanne Targaryen. She was married to Lord Rodrik Arryn, with whom she had one child, Aemma Arryn.[3]

Daella was small of stature: on her toes she stood five feet and two inches. Everyone who met her judged her younger than she was in truth, as there was a childish aspect to her. Her mother, Queen Alysanne Targaryen, described Daella as "my little flower". As she grew to maidenhood she was described as pretty, enough to attract the attention of young lords, but wasn't singled out as exceptionally beautiful.[1]

Daella was considered sweet, kind, and gentle, with a tender heart. However, she was also a delicate and shy, tongue-tied girl, who was easily frightened and quick to cry. She liked flowers but was afraid of gardens, bees, and cats.[1]

The princess was not clever. Although she could read, Daella could only do so haltingly, and without full comprehension. She did not speak until she was almost two years of age. She was unable to memorize even the simplest prayers. Daella had a sweet voice, but was afraid to sing, being unable to recall the correct words. The mildest scolding would reduce Daella to tears.[1] 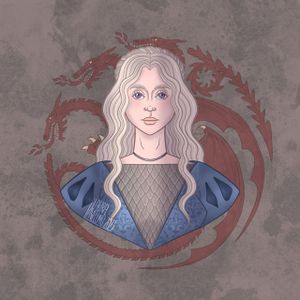 Daella was born in 64 AC.[1] She was a shy and frightened girl, who considered her sister Maegelle as her "guiding star". When she was young, Daella had a kitten whom she loved, but after it scratched her she did not dare to go near cats anymore.[1]

Daella was the victim of some of the pranks of her younger sister, Princess Saera. Saera always sneaked cats into Daella's bedchamber, knowing that Daella was afraid of them, and she once filled Daella's chamberpot with bees.[1]

King Jaehaerys I Targaryen and Queen Alysanne Targaryen assumed that Daella would one day marry her brother, Prince Vaegon, who was only one year older than she was. However, as time passed it became clear that the two children did not like one another. Vaegon tolerated Daella's presence, but no more, and considered her to be stupid. Daella, on the other hand, was frightened of Vaegon, and considered him to be mean. Although Jaehaerys believed that the two children would eventually warm to one another, in truth their dislike only increased. In 73 AC, one of Alysanne's companions asked Daella and Vaegon when they would be wed. Vaegon's public reaction was a grave insult to Daella, who fled the hall crying, as her mother ran after her. Following this incident, Jaehaerys and Alysanne agreed that they would need to find other spouses for their children.[1]

Finding a husband for Daella proved a difficult task for Queen Alysanne. At the age of thirteen, Daella traveled to Driftmark to meet Corlys Velaryon. However, Daella became seasick when she crossed Blackwater Bay, and complained that Corlys had seemed to like his boats better than he liked her after her return home. At the age of fourteen, Daella kept company with several promising squires of a similar age: Denys Swann, Simon Staunton, Gerold Templeton, and Ellard Crane. By the end of the year, after Simon attempted to get her to drink wine and Crane had kissed her on the lips, Daella hated them all.[1]

At the age of fifteen, Daella traveled with Queen Alysanne to the riverlands where Royce Blackwood, the son of Lord Blackwood, paid court to her. Daella was smitten with the boy, and Alysanne and Lord Blackwood began to discuss plans for the wedding. However, when Daella learned that House Blackwood did not follow the Faith of the Seven but instead worshiped the old gods, and that she would be expected to wed in front of a weirwood, she was horrified. The betrothal subsequently did not happen.[1]

On the first day of 80 AC, King Jaehaerys told Queen Alysanne that he wanted Daella wed before the year was over, declaring he no longer cared to whom she was wed. Alysanne, worried that Daella would not accept a husband, inquired what would happen to her if she failed the deadline, as joining the Faith was not an option, since they did not accept a girl that could not read the prayers. In response, Jaehaerys proposed the silent sisters, imploring Alysanne not to let it come to that.[1]

Alysanne explained to Daella what Jaehaerys had commanded, and allowed her to choose between three men: Boremund Baratheon, the Lord of Storm's End, Ser Tymond Lannister, the heir to Casterly Rock, and Rodrik Arryn, the Lord of the Eyrie. Daella eventually chose Lord Rodrik, declaring to Alysanne that he seemed “good and wise, like Father". Concerning Rodrik's four children from an earlier marriage, Daella declared "I'm to be their new mother!" According to Archmaester Gyldayn, Queen Alysanne's response to this was not recorded, the account written by Grand Maester Elysar about that day only said "Gods be good".[1] 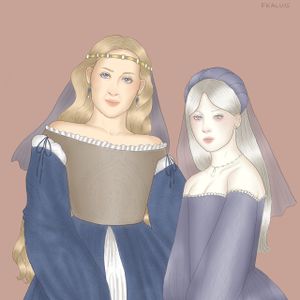 Daella and Lord Rodrik Arryn were married before the year turned in a small ceremony in the sept on Dragonstone in front of a small crowd. As Daella had declared that she could not stand the shame of a bedding ceremony, there was no bedding following the wedding. Afterwards, Daella accompanied Rodrik to the Eyrie, where she met his children. Although she immediately clashed with Elys Arryn, the eldest, she became fond of the younger three, and they of her. Meanwhile, as he had promised, Rodrik was kind and caring to Daella, and pampered and protected her, calling her "my precious princess." From time to time, Daella sent letters to Queen Alysanne Targaryen, written by Lord Rodrik's younger daughter, Amanda, in which she spoke of how happy she was.[1]

In 82 AC, after a year and a half of marriage, Daella wrote to her mother in her own hand to inform her of her pregnancy, telling her mother that she was frightened and asking her to come. Alysanne flew to her daughter on Silverwing, arriving three months before Daella was due. Alysanne remained with Daella until she gave birth. Daella went into labor a fortnight too early, and had a long and troubled labor. Although her daughter, Aemma Arryn, was healthy, childbed fever began soon after the birth. Her fever only grew worse, and Daella eventually died, at the age of eighteen.[1]

Rodrik begged Alysanne's permission to bury his late wife in the Vale of Arryn, but was refused. Alysanne declared that Daella would be cremated, and that her ashes would be interred on Dragonstone beside those of her sister, Princess Daenerys. According to Archmaester Gyldayn, Daella’s death was the first hint of the rift that was to open between King Jaehaerys I Targaryen and his queen, as Alysanne believed her husband had pushed Daella into marriage at too early an age.[1]

In the earlier published Targaryen family tree as found in The World of Ice & Fire, Princess Daella was the fifthborn child and second daughter of King Jaehaerys I Targaryen and Queen Alysanne Targaryen.[4] For Fire & Blood, Daella was changed to become the eighthborn child and third daughter of Jaehaerys and Alysanne. Besides this change, several other children of Jaehaerys and Alysanne were shifted in their order of birth,[N 1] while the character of Prince Aeryn Targaryen was exchanged entirely for Princess Daenerys. Regarding these changes, Elio Garcia has stated the following:

... George had some new ideas for some of the names and the stories of the children who died young, and corrected some issues that came out of his original birth order (we actually got the names of all the kids quite late in the production of TWoIaF—literally a month before we had to finalize the book—so there was not much time to interrogate it). However, the stories of those who live to adulthood, as published in TWoIaF, do remain the same (just, of course, much more detailed).[5]