Lady Daenaera Velaryon was the queen consort and second wife of King Aegon III Targaryen, and a member of House Velaryon.[5] Daenaera was the daughter of Daeron Velaryon, a cousin of Lord Alyn Velaryon, and his wife, Hazel Harte.[5][2]

Daenaera was a "surpassingly beautiful" child, and was also called beautiful when she came to adulthood.[5] She had long silver hair laced with gold. Her eyes were "blue as a summer sea" and her skin was "smooth and pale as winter snow". At age six, Daenaera had a sweet and bold and mischievous smile, that made people think of her as a bright, sweet, and happy little girl.[2] At her presentation at the Maiden's Day Ball, Daenaera wore a gown of pale white silk, Myrish lace, and pearls.[2]

She had a sunny nature,[3] and charmed the people with her happy waves, flushed cheeks, and shy, sweet smiles.[2] When Rhaena Targaryen first took flight on her dragon Morning, the sight so pleased Daenaera she was heard to say that she wanted a dragon of her own.[1]

Daenaera's father, Daeron Velaryon, drowned in the Stepstones during Lord Alyn's attack in the Daughters' War in 133 AC. Her mother, Hazel Harte, was one of the casualties of the Winter Fever, making Daenaera an orphan at the age of six. Lord Alyn Velaryon and his wife, Lady Baela Targaryen, took her as their ward afterward.[2] 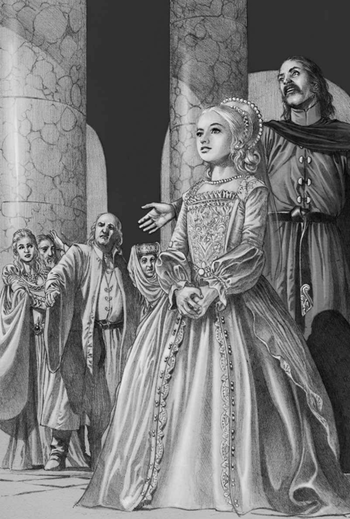 Daenaera is presented by Corwyn Corbray at the Maiden's Day Ball, as depicted by Douglas Wheatley in Fire & Blood.

Young King Aegon III Targaryen's first marriage to Princess Jaehaera Targaryen had ended tragically in 133 AC, with Jaehaera's apparent suicide. The Hand of the King, Lord Unwin Peake, attempted to betroth his own daughter to the thirteen-year-old king, but was prevented in this by Aegon's regents. However, Lord Peake did not give up his attempts, and declared a ball to be held in the throne room of the Red Keep on Maiden's Day in 133 AC to find a new wife for the king, with his daughter as one of the nearly thousand maidens presented to Aegon.[2]

However, at almost the very end of the ball, Aegon's half-sisters Rhaena and Baela Targaryen brought forth Daenaera, telling Aegon that they had found his new queen.[5] Even though she was only six years old, Daenaera was seen as breathtakingly beautiful, and people believed the happy little girl would be a perfect antidote for the young king's gloom. When Aegon returned her smile and told her she looked very pretty, all knew who his selection would be. Daenaera wed King Aegon on the last day of the year 133 AC.[2]

The poisoned tarts and the secret siege

Lord Peake was greatly frustrated by Aegon's choice of Daenaera, as her young age prevented his plans for Aegon to produce a heir of his own.[2] He also took his daughter's rejection in favor of Daenaera as a personal affront.[3] His efforts to have the marriage put aside were opposed by both Aegon and the other regents, and was one of the factors that eventually resulted in his resignation as Hand in 134 AC.[5]

Daenaera's happy nature did briefly improve Aegon's gloomy temperament, and on three occasions he took his new queen out pf the Red Keep to show her the sights of King's Landing. But in 134 AC, when Aegon's brother Prince Viserys Targaryen was recovered from Lys by Alyn Velaryon, he became the king's constant companion, and Daenaera was neglected.[3] However, in 135 AC, when Viserys and Aegon quarreled over the king forcing his brother to send his treasured dragon egg away to Dragonstone, Aegon began to spend more time with Daenaera again. Unfortunately, it was during a quiet dinner that Aegon shared with his queen, as well as his friend and food taster Gaemon Palehair, that Gaemon collapsed from belly cramps and Daenaera also suffered from stomach pains.[5][1] Grand Maester Munkun gave Daenaera a powerful purgative, which probably saved her life, but Gaemon died within the hour. Viserys mended his rift with his mourning brother as they sat by Daenaera's bedside.[1]

It was determined that the poison was the tears of Lys, baked in the apple tarts. As Aegon usually did not eat sweets, he was not harmed. However, after the downfall of House Rogare and the secret siege of Maegor's Holdfast, the Hand Thaddeus Rowan was tortured until he falsely confessed to plotting with the Rogares to poison both King Aegon and Queen Daenaera, to replace them with Prince Viserys and his wife Larra Rogare. Though the truth of the plot was revealed and the real perpetrators arrested (except for the secret mastermind behind it all), Aegon and Viserys continued to be mistrustful and did not open the gates of Maegor's Holdfast until they saw Munkun send ravens to the king's leal lords. By that point, they had run so short of food within the holdfast that Daenaera cried herself to sleep at night, and two of her ladies were so weak from hunger that they had to be helped across the moat.[1]

Queen Daenaera did not attend the treason trials in 136 AC. Three of those put on trial were highborn ladies, her attendants: Lucinda Penrose, Cassandra Baratheon, and Priscella Hogg. Lucinda admitted to wanting Daenaera dead, saying that if she had not been attacked and disfigured before the Maiden's Day Ball, Lucinda would be queen and Daenaera would be serving her. It was strongly suspected that Lady Clarice Osgrey, aunt of Unwin Peake and supervisor of all Queen Daenaera's maids, companions, and attendants, was also involved with the conspiracy, but no-one would confess to her having a part in the poisoning.[1]

The grand progress that never was

The new Hand of the King, Lord Torrhen Manderly, did not care for the "sullen" King Aegon, but he doted upon Queen Daenaera. As the king's sixteenth name day was approaching in 136 AC, the Hand decided that Aegon and Daenaera should make a royal progress for his coming of age. Torrhen felt that the smallfolk would love the sweet young queen, and she would make up for any charm that Aegon might lack. The regents agreed, and the spring progress, planned to take a full year across all the Seven Kingdoms, would be a true beginning for Aegon's reign, and show Westeros healing from the scars of the Dance of the Dragons. Detailed plans were made for the progress, down to the clothing the royals would wear: on days when Daenaera would wear green, Aegon would wear black, and on days when the queen would wear Targaryen red-and-black, the king would wear a green cloak. However, on Aegon's name day, he coldly dismissed his regents and Hand, and canceled the progress.[1] 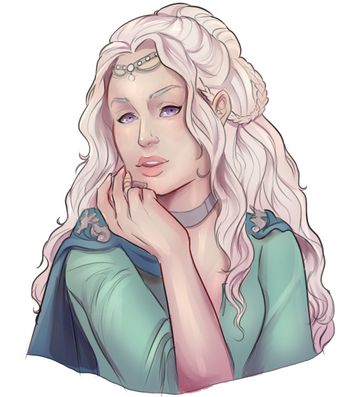 While Aegon and Daenaera were married when he was thirteen and she only six years old, the marriage was not consummated until long after Daenaera had flowered. Aegon was very melancholy, and had come to dislike being touched, even by the hand of his beautiful queen.[5] But eventually Aegon called Daenaera to his bed, and they had five children in their marriage: Daeron (born 143 AC), Baelor (born 144 AC), Daena (born 145 AC), Rhaena (born 147 AC), and Elaena (born 150 AC). King Aegon III died in 157 AC.[6] It is currently unknown if Daenaera outlived her husband.

Daenaera's two sons reigned after her husband's death. Daeron I Targaryen, the Young Dragon, became famous for his conquest of Dorne, though his conquest lasted only for four years.[6]

When Daeron died childless, his younger brother was crowned Baelor I Targaryen in 161 AC. Baelor, who had been married to his sister, Daenaera's eldest daughter Daena, had his marriage undone, and locked his three sisters in what would become known as the Maidenvault. Baelor the Blessed was known for being pious, and fasted often, and long. One such fast eventually killed him.[7]

During her captivity in the Maidenvault, Daena had an affair with her cousin, Prince Aegon. She gave birth to a bastard son, named Daemon, in the end of Baelor's reign. In 182 AC King Aegon IV gave Daemon the Targaryen sword Blackfyre, and Daemon choose the name Blackfyre for himself.[8] Daemon was legitimized on Aegon's deathbed in 184 AC, and House Blackfyre eventually caused several wars that threatened the Targaryen dynasty.

The youngest girl, Elaena, was married three times, and gave birth to seven children.[7] Her first two children were illegitimate, fathered by Lord Alyn Velaryon: Jon and Jeyne Waters. Descendants of Jon live until this day, under the name Longwaters. Subsequently she married Lord Ossifer Plumm, by whom she had one child, Viserys Plumm (though he is rumoured to have actually been fathered by King Aegon IV); and Lord Ronnel Penrose, by whom she had four children (Robin Penrose, Laena Penrose, Jocelyn Penrose, and Joy Penrose). Her final marriage to Ser Michael Manwoody was childless.[9]

Brother, if it please you, we have brought your new queen.[2]

She sparkled, and when she smiled, the singers in the gallery rejoiced, for they knew that here at last was a maid worthy of a song.[2]

The sound of the queen's laughter was like music to this fool, so sweet that even the king was known to smile.[3]