Daenerys Targaryen (daughter of Jaehaerys I)

Princess Daenerys Targaryen was the eldest daughter and secondborn child of King Jaehaerys I Targaryen and Queen Alysanne Targaryen.

As a babe, Daenerys was strong and healthy.[1]

She was a happy child, endlessly curious and utterly fearless, a delight to all who knew her.[1] Daenerys was a lively, laughing child. She was often mud-spattered and grass-stained.[3] She was seen as "the darling of the realm", and considered a great beauty.[2] 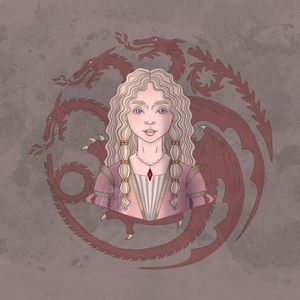 Born during the seventh moon of 53 AC in King's Landing, Daenerys was the eldest child of the king and queen at the time, her older brother Aegon having died some years before. All of the Seven Kingdoms were delighted by her birth, save for Princess Aerea Targaryen, the eldest daughter of King Jaehaerys's older sister Rhaena, as Aerea had been Jaehaerys's heir until then.[1] Daenerys began to talk well before her first nameday. By the time she was one and a half years old, she could already walk and run.[1]

In 55 AC, Daenerys was crowned the queen of love and beauty by Ser Simon Dondarrion of Blackhaven. That same year, when Queen Alysanne became pregnant, Daenerys was firm in telling her mother that she wanted a sister. When Alysanne gave birth, the child turned out to be a boy, Aemon. Daenerys eventually warmed to Aemon. By the time she was four, her favorite toy had become a broomstick dragon, on which she was "flying" everywhere.[3] Additionally, Daenerys delighted in telling her brothers Aemon and Baelon what to do.[3]

Queen Alysanne believed that Daenerys, as the eldest of their three living children, should be the king's heir and first in line to the throne. King Jaehaerys, however, regarded Prince Aemon as his heir since the day he had been born. Though Alysanne would voice her displeasure about this to the king, reminding him that Daenerys was older and should therefore be queen, Jaehaerys would reply telling her that Daenerys would become queen after she married Aemon, and rule the kingdoms by his side. According to Grand Maester Benifer, the king's response would not entirely please Alysanne.[3]

Princess Daenerys became one of the many victims of the Shivers in 60 AC. Early in the year, she woke her mother during the night complaining of feeling cold. All that could be done was done for her. She was given poultices, hot soups and scalding baths, blankets, furs, hot stones, nettle tea, mother's milk. Septons and septas prayed, and maesters came and went, but her shivering grew worse. Near dawn, King Jaehaerys insisted that his daughter needed a dragon and had ravens sent to Dragonstone, instructing the Dragonkeepers to immediately bring a hatchling to the Red Keep. It was too late. Daenerys died a day and a half after she had first complained of feeling cold.[2]

According to Archmaester Gyldayn, the death of Daenerys must have seemed more cruel than others, as it struck at the very heart of the Doctrine of Exceptionalism that Jaehaerys had created to validate his marriage to his sister.[2]

Following the death of Daenerys, Queen Alysanne stopped attending council. Within two months of Daenerys's death, the queen discovered that she was pregnant again. Late in 60 AC, Queen Alysanne gave birth to Princess Alyssa, who was so like Daenerys as a baby that Alysanne often wept to behold her, remembering the deceased Daenerys. The likeness faded as Alyssa aged, however.[2]

In the earlier published Targaryen family tree as found in The World of Ice & Fire, Princess Daenerys did not exist. In her place was Prince Aeryn Targaryen, Jaehaerys and Alysanne's sixthborn son[4] who died young.[5] Besides Aeryn having been exchanged for Daenerys, several other children of Jaehaerys and Alysanne were shifted in their order of birth.[N 2]

Regarding these changes, Elio Garcia has stated the following:

... George had some new ideas for some of the names and the stories of the children who died young, and corrected some issues that came out of his original birth order (we actually got the names of all the kids quite late in the production of TWoIaF—literally a month before we had to finalize the book—so there was not much time to interrogate it). However, the stories of those who live to adulthood, as published in TWoIaF, do remain the same (just, of course, much more detailed).[6]