Lady Daenys Targaryen, called Daenys the Dreamer, was a noblewoman of House Targaryen and the daughter of Aenar Targaryen, a nobleman from the Valyrian Freehold and the Lord of Dragonstone.[2] 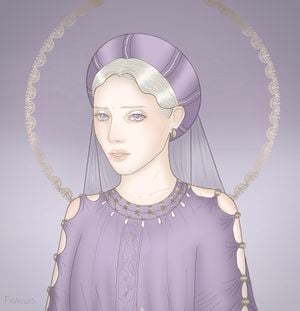 When Daenys was still a maiden,[5][4] she had a powerful prophetic dream, showing the destruction of Valyria by fire. In 114 BC, her father, Lord Aenar Targaryen, heeded her dream and sold his holdings in the Valyrian Freehold and moved his family and all of their belongings to Dragonstone, an island in the narrow sea off the eastern coast of Westeros. With them, they took five dragons, including Balerion. When the Doom of Valyria came twelve years later, House Targaryen was the only family of dragonriders which survived.[2]

Daenys was married to her brother Gaemon, who followed their father as Lord of Dragonstone. Their children were Aegon and Elaena Targaryen.[2] Daenys and Gaemon also had at least one younger daughter, who would marry a petty lord.[6]

By the time of the War of the Five Kings, it is believed that visions written down by Daenys before the Doom of Valyria were in a book called Signs and Portents, that is now lost. Archmaester Marwyn claims he found three pages from it in his Book of Lost Books.[5]