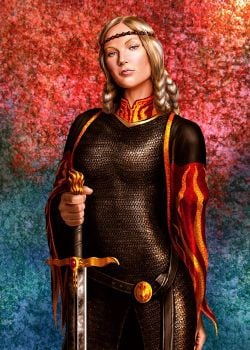 Dark Sister is a famous longsword of Valyrian steel. It is one of two ancestral swords of House Targaryen, the other being Blackfyre.

Dark Sister has been in the possession of House Targaryen since before Aegon's Conquest.[1] It may have been forged for a woman warrior originally, as its slender blade is designed for a woman's hand.[2]

Dark Sister, as depicted by Velvet Engine in The World of Ice & Fire.

Queen Visenya Targaryen was skilled in the use of Dark Sister, having trained beside her younger brother, King Aegon I Targaryen, since childhood. During the First Dornish War, the Targaryens were attacked on multiple occasions by assassins sent by Dorne.[3] Visenya was attacked one night in King's Landing, and the queen slew the last assassin with Dark Sister after two of her escorts were killed.[4] Visenya also twice wielded her longsword against Dornish assassins in Aegon's defense,[5] with one such attack taking place in 10 AC.[6] When Aegon proclaimed he still felt sufficiently protected by his guards, Visenya quickly drew Dark Sister and cut Aegon's cheek before the king's defenders could react. Aegon then entrusted Visenya with establishing the Kingsguard.[6]

Visenya bestowed Dark Sister on her thirteen-year-old son, Prince Maegor Targaryen, in 25 AC.[7] When his brother Aenys I became king in 37 AC, Maegor was given Blackfyre. Since that day, he hung Dark Sister on the walls of his chambers on Dragonstone, while wielding Blackfyre in battle.[7]

After Dowager Queen Visenya died on Dragonstone in 44 AC, the hostage Dowager Queen Alyssa Velaryon, Aenys's widow, fled from with her children Jaehaerys and Alysanne, taking Dark Sister from Visenya's chamber.[8] In 48 AC, Jaehaerys carried Dark Sister when he announced his claim to the Iron Throne at Storm's End. The prince became king after Maegor died on the throne.[7]

Prince Baelon Targaryen, one of King Jaehaerys's sons, wielded Dark Sister in 92 AC when avenging the death of his brother, Prince Aemon, who had been slain by Myrish exiles who had invaded and occupied Tarth. Baelon the Brave slew countless Myrmen with the blade.[9]

Prince Daemon Targaryen was given Dark Sister by King Jaehaerys I for his prowess.[10][N 1] Ser Criston Cole defeated Daemon in the tourney for King Viserys I's accession, knocking Dark Sister from the prince's hand with a morningstar.[11] Daemon wielded Dark Sister during his war for the Stepstones, using it to behead Craghas Drahar in 108 AC.[11] In 115 AC, he defeated the Braavosi betrothed of Laena Velaryon with the blade in a duel.[11]

During the Dance of the Dragons, Daemon fought against Aemond Targaryen with the blade in the Battle Above the Gods Eye, leaping from the back of his dragon, Caraxes, to plunge Dark Sister into Aemond's eye. When Aemond's bones were found some years later in the waters of the Gods Eye, Dark Sister was thrust hilt-deep through his eye socket.[12]

Prince Aemon Targaryen was deemed worthy of Dark Sister. The Dragonknight was considered the greatest jouster and swordsman of his era.[13][14] 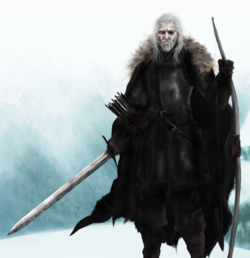 Dark Sister was eventually bestowed upon Lord Brynden Rivers, though his favorite weapon was a weirwood longbow.[2] In 205 AC, a young Duncan the Tall saw Lord Bloodraven wearing Dark Sister on his hip while riding in the Street of Steel with his Raven's Teeth.[14]

According to a semi-canon source, Brynden took Dark Sister with him when he went to the Wall to join the Night's Watch.[15] Bloodraven rose to become Lord Commander of the Night's Watch in 239 AC, but he disappeared beyond the Wall in 252 AC.[16] The sword's current whereabouts are unknown.

Dark Sister was made for nobler tasks than slaughtering sheep. She has a thirst for blood.[11]