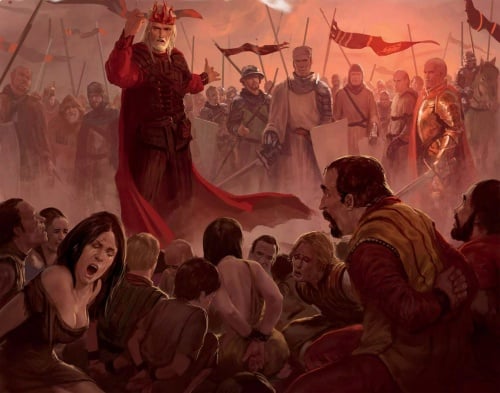 The aftermath of the Defiance of Duskendale - by Marc Simonetti ©

The Defiance of Duskendale, which took place in 277 AC, was a landmark event during the reign of King Aerys II Targaryen. The Defiance began when Lord Denys Darklyn refused to pay taxes, demanding a new charter for Duskendale and certain rights for its citizens. It ended with the extirpation of House Darklyn and a severe rift between the king and his Hand of the King, Lord Tywin Lannister.

Duskendale, which had once been an important port on Blackwater Bay and a seat of kings, had seen its wealth shrink and trade dwindle due to the growth of nearby King's Landing. Denys Darklyn, Lord of Duskendale, wished to halt this decline. He desired to win a charter for Duskendale, similar as Dorne had received nearly a century before. Lord Tywin Lannister, Hand of the King, however, firmly rejected the proposal. Infuriated at Tywin's refusal, Denys devised a new plan, which would eventually have severe consequences. Some say Lord Denys had been driven by the influence of his Myrish wife, Lady Serala.[1]

The Defiance of Duskendale

The Defiance began in 277 AC when Lord Denys Darklyn ceased to pay his taxes,[1] to demonstrate his anger.[2] Aware of the strained relationship between King Aerys II Targaryen and Lord Tywin Lannister, Denys invited Aerys to come to Duskendale to hear his petition. When Tywin advised him not to go, Aerys, who wished to distance himself from his Hand, decided to deal with the problem personally. Aerys travelled to Duskendale with a small escort led by only one Kingsguard knight, Ser Gwayne Gaunt, to bring the defiant Lord Darklyn to heel. Upon arrival, however, the king was imprisoned. Some of the king's escort were killed defending their king, including Ser Gwayne, who was slain by Denys's master-at-arms, Ser Symon Hollard.[1][3] Aerys was shoved roughly, stripped of his royal raiment, and even struck.[1] Young Robin Hollard, a squire, pulled the king's beard.[3]

Lord Denys refused to give up the king, threatening that he would kill Aerys at the first sign of an assault. As Lord Tywin Lannister could not attack Duskendale, he besieged it with a sizable host.[3][1]

The Defiance lasted half a year.[1][3] Lord Denys remained convinced that it was a matter of time until Tywin would offer better terms. However, Tywin gave Duskendale a final demand to surrender the king, promising that refusal would result in the loyalists storming the town and executing everyone inside.[1]

The Defiance was eventually ended when Ser Barristan Selmy of the Kingsguard offered to perform a solo rescue mission. Lord Tywin gave him a day before he would storm the castle. Barristan scaled the walls unseen at night, making his way into the Dun Fort disguised as a hooded beggar, before scaling those walls as well. He freed King Aerys out of the dungeons, and while bringing the king to safety, avenged his sworn brother, Gwayne Gaunt, by slaying his killer, Symon Hollard. Before the castle's gates could be closed, Barristan had managed to get a horse and bring the king to safety, despite an arrow wound to the chest.[1][4] Without a hostage, Lord Denys surrendered.[1]

King Aerys II Targaryen's vengeance was terrible. Though Lord Denys Darklyn begged for mercy, the king demanded the deaths of Denys and his immediate family, as well as his uncles, aunts, and distant House Darklyn kinsmen living in Duskendale. House Hollard, Lord Denys's goodkin, were attainted and executed as well. Ser Jon Hollard, who had been married to Denys's sister, died together with his wife and young son. Robin Hollard, the squire who had pulled Aerys's beard when he had first been seized, died upon the rack. The only exception was young Dontos Hollard, whose life was spared when Ser Barristan Selmy requested it. Aerys, unable to refuse the man who had saved his life, granted this boon. Denys's wife, Lady Serala, had her tongue and womanly parts torn out, after which she was burned alive.[1][3] The lands and incomes of Duskendale were granted to House Rykker, while the lands of House Hollard were taken away, their villages burned, and their castle torn down.[3]

Despite what happened, the people of Duskendale still love Lord Denys. They blame his foreign wife, Serala, and half of them still feel that the punishment Aerys gave her was too kind by half.[3]

Following his half year of captivity at Duskendale, Aerys II was forever a changed man. It is believed by some that it was the Defiance which caused the king's madness.[3] Barristan, however, claims that it had always been in him, with the lapses of madness growing more frequent over time,[5] and it is considered that the Defiance shattered what little sanity Aerys had left.[1] His madness grew significantly worse in the years that followed. He would no longer allow others to touch him, and as a result, his hair and fingernails grew longer and longer. No blades were allowed near him, except for the swords of his Kingsguard, and his judgments became more severe and crueler. From the end of the Defiance in 277 AC, until the tourney at Harrenhal in 281 AC, Aerys refused to leave the Red Keep.[1][6]

Furthermore, his experience at Duskendale had convinced Aerys that his son and heir, Prince Rhaegar Targaryen, had conspired with Tywin to have Aerys killed during the Defiance by storming the walls, which would have allowed for Rhaegar to ascend the Iron Throne and marry Lord Tywin's daughter, Cersei Lannister. Aerys grew mistrustful of Tywin as a consequence, going as far as to refuse to meet with Tywin without the presence of all his Kingsguard knights. Relations with his son Rhaegar became more strained, and the king began to mistrust everyone, from the smallfolk to his own wife, Queen Rhaella Targaryen.[1]

The story of the Defiance is recounted to Brienne of Tarth when she travels to Duskendale in search of Sansa Stark.[3]

Now in Meereen, a regretful Ser Barristan Selmy considers what might have happened had he not rescued King Aerys II Targaryen from Duskendale.[6]

If he had not gone into Duskendale to rescue Aerys from Lord Darklyn's dungeons, the king might well have died there as Tywin Lannister sacked the town. Then Prince Rhaegar would have ascended the Iron Throne, mayhaps to heal the realm. Duskendale had been his finest hour, yet the memory tasted bitter on his tongue.[6]