Dorea Sand is the thirdborn bastard daughter of Prince Oberyn Martell and his paramour Ellaria Sand. She is one of the famous Sand Snakes.[2]

Like her sisters, Dorea has the same shape of eyes as her father's.[3] Dorea is presumably named after her uncle, Prince Doran Martell. 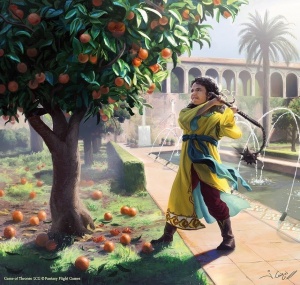 Dorea remains at the Water Gardens while her mother travels with her sister Loreza to Hellholt, seat of House Uller.[5]