The Dornish Marches - by Rene Aigner ©

The Dornish Marches, or simply the Marches,[1] are an area of southern Westeros in the border region north of Dorne.[2] The marches are predominantly in the southwestern stormlands and extend east to the Sea of Dorne,[3][4][5] although much of the western marches are within the Reach.[6] People from the region are known as marchers,[7] and they are ruled by marcher lords.[8]

The hundreds of leagues of the marches consist of grassland, moors, and plains, with a portion of the Red Mountains to the east.[9] The highlands of the marches have a cold climate.[10]

A road runs south from the ruins of Summerhall in the northern marches[11] to Yronwood via the Boneway.[5]

The marcher lords of the stormlands have some of the strongest castles of the Seven Kingdoms,[12] as they have defended against Dornish incursions for thousands of years.[13] The eastern region of the marches around Stonehelm is known as the Red Watch.[14][15]

The Kingdom of the Reach included the western marches from Horn Hill to Nightsong.[6] Most of the Dornish Marches are now in the stormlands, aside from the Tarly lands near Horn Hill. Starpike, the seat of House Peake in the Reach, is also part of the marches.[22]

The marcher lords of the stormlands have a strong martial tradition.[13] The Dornish Marches are known for producing excellent longbows, and many famous bowmen come from the region, such as Fletcher Dick.[12]

The Carons of Nightsong style themselves Lord of the Marches, but they do not have dominion over their fellow marcher lords.[12] Mace Tyrell, Lord Paramount of the Reach, includes Defender of the Marches among his titles.[23]

The so-called stony Dornishmen of the Red Mountains have the most in common with Westerosi living north of the mountains when compared to salty and sandy Dornish living in southern Dorne. Despite this, they have fought lords from the Reach and the stormlands for thousands of years.[24] Marchers and Dornishmen each consider the other to be liars,[7] and marchers consider the Dornish accent of the Common Tongue to be incomprehensible.[24]

Marcher ballads are known for their length[25] and numerous verses.[26] Many songs are about conflicts between brave marchers and cruel Dornishmen.[24]

Lords from the stormlands, the Reach, and Dorne have fought each other and amongst themselves for thousands of years.[12]

House Dondarrion was founded when a messenger was ambushed by two Dornishmen while riding on the marches on a stormy night. When the rider thought he was doomed, a bright purple lightning bolt killed both Dornishmen. Because the rider was able to deliver his crucial message, the Storm King raised him as the first Lord Dondarrion.[27]

Dornish parties raided across the marches during Aegon's Conquest.[28] House Martell resisted House Targaryen during the Wars of Conquest, so the Dornish Marches guarded the southern border of the Seven Kingdoms against attacks from Dorne.[29]

The Dornish Marches suffered grievously during the First Dornish War, and Lord Fowler burned Nightsong.[29] Marchers urged Dornish lords to surrender by claiming the Martells had betrayed them, possibly because Sunspear was not burned by dragonfire unlike other Dornish castles.[30]

After ascending the Iron Throne, King Aenys I Targaryen visited the Dornish Marches during his journey to Oldtown.[31] The outlaw Vulture King invaded the Dornish Marches in what became known as the Second Dornish War. Lord Orys Baratheon defeated Lord Walter Wyl at Stonehelm, and marcher lords such as Lady Ellyn Caron, Lord Harmon Dondarrion, and Lord Samwell Tarly participated in the Vulture Hunt.[32][31]

Lords Dondarrion, Selmy, and Tarly represented the Dornish Marches at the Golden Wedding.[33] King Jaehaerys I Targaryen visited Horn Hill, Nightsong, and Blackhaven after the elevation of Alfyn to High Septon.[34] During the Third Dornish War, Lord Simon Dondarrion led a small force of marcher knights into the western Red Mountains against a second Vulture King, and Jaehaerys and Lord Rogar Baratheon pursued the outlaws from the east. Raiding of the marches declined for some time after the end of the war.[35]

Qoren Martell, Prince of Dorne, refused to involve Dorne in the Dance of the Dragons. Once his daughter Aliandra became Princess of Dorne, however, she encouraged her bannermen to gain her favor by raiding the marches.[30] Lord Royce Caron resigned from the regency of Aegon III so he can protect Nightsong from the Dornish threats.[36] Ser Steffon Connington was slain by Wyland Wyl while pursuing raiders on the marches.[37]

Marchers who hated the Dornish were among the supporters of King Aegon IV Targaryen, although Aegon the Unworthy's plan to invade Dorne was a failure.[38]

After Dorne joined the Seven Kingdoms peacefully, King Daeron II Targaryen raised Summerhall in the Dornish Marches. Resentment by marcher lords and knights toward the Dornish influence at Daeron's court was one of the causes of the First Blackfyre Rebellion.[39]

King Maekar I Targaryen was slain fighting a rebellious lord on the Dornish Marches[40] during the Peake Uprising.[41] 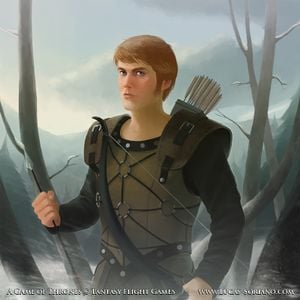 Anguy, a commoner from the Dornish Marches, wins the archery competition at the Hand's tourney.[42]

Two sibling freeriders from the marches enter the service of King Robert I Baratheon.[43]

The acting Hand of the King, Tyrion Lannister, sends Princess Myrcella Baratheon to Dorne in hopes of repairing relations with Sunspear. As another concession, he offers some castles in the Marches to Dorne.[44] Once Myrcella arrives, Doran Martell, Prince of Dorne, has pledged to mobilize Dornish hosts in the Prince's Pass and the Boneway to keep the marcher lords in their castles rather than aid Stannis Baratheon.[8] The Dornish refuse to invade after Stannis takes Storm's End, but Tyrion hopes the marcher lords will remain in their lands.[45]

Anguy is now a member of the brotherhood without banners, the outlaw band led by the marcher lord Beric Dondarrion.[46] Tom of Sevenstreams tells Arya Stark that the only songs that Anguy knows are long marcher ballads.[26] When Anguy tells Arya tales of the marches, the girl finds his stories droll.[47]

Prince Doran denies Obara Sand's request to allow her and Nymeria Sand to take the hosts from the Prince's Pass and the Boneway to attack the marcher lords and then Oldtown.[48]

According to Alleras, black and white ravens are kept separate at the Ravenry because they quarrel like Marchers and Dornishmen.[49]

One of the queen's men informs Jon Snow that although the marches can be cold, it is much colder at Castle Black.[10]

Ser Barristan Selmy considers himself to be a man of the Dornish Marches.[19]

The fiercest fighters in the stormlands, and perhaps in all of Westeros, are undoubtedly the men of the marches, who are said to be born with sword in hand and oft boast of learning to fight even before they learn to walk.[12]

Tom: I'd dearly love someone to sing with, that I would. Lem can't carry a tune, and our longbow lad only knows marcher ballads, every one of them a hundred verses long.
Anguy: We sing real songs in the marches.[26]

Dornishmen and Highgardeners had never had great love for one another; over the centuries, they had fought border wars beyond count, and raided back and forth across mountains and marches even when at peace.[50]

Arya: Dornishmen lie, don't they?
Anguy: They're famous for it. Of course, they say the same of us marchers, so there you are.[7]