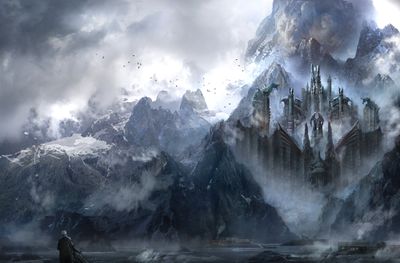 Dragonmont is a volcano on the island of Dragonstone in the crownlands. The activity of the volcano gave rise to the island. The castle of Dragonstone is a small fortress located on the face of the mountain.[1]

The volcano is still active, with pale grey steam rising from its hot vents[1] and smoke rising from its peak.[2] Beneath Dragonmont are rich deposits of dragonglass. There is much obsidian seen in the old tunnels beneath the mountain, found in chunks and boulders. Smallfolk live in villages below the Dragonmont, tillers of the land and fishers of the sea.[3] There are rocky paths on the Dragonmont.[4] Within the mountain are shafts and secret paths.[5]

The Valyrian Freehold constructed Dragonstone beneath the Dragonmont.[6]

At the start of the Dance of the Dragons, six wild and semi-wild dragons—the Cannibal, Grey Ghost, Seasmoke, Sheepstealer, Silverwing, and Vermithor—made their lairs in the smokey caverns of the volcano.[7] Grey Ghost resided in a smoking vent on the volcano's eastern side.[3] King Aegon II Targaryen and Sunfyre recuperated in a hidden lair on the eastern slopes.[2]

Following his defeat in the Battle of the Blackwater, Stannis Baratheon descends into the Dragonmont with Melisandre.[5]

A pale grey wisp of smoke blew from the top of the mountain to mark where the island lay. Dragonmont is restless this morning, Davos thought, or else Melisandre is burning someone else.[5]

Queer talking I have heard, of hungry fires within the mountain, and how Stannis and the red woman go down together to watch the flames. There are shafts, they say, and secret stairs down into the mountain's heart, into hot places where only she may walk unburned. It is enough and more to give an old man such terrors that sometimes he can scarcely find the strength to eat.[5]