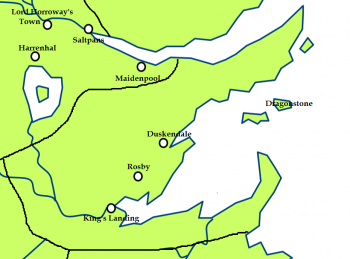 Dragonstone
The crownlands and the location of Dragonstone

Dragonstone is an island in Blackwater Bay in the crownlands, located south of Crackclaw Point and Claw Isle, northeast of Driftmark, and north of the Gullet.[1] It contains the castle of Dragonstone, seat of House Baratheon of Dragonstone, and the Dragonmont.[2] During the rule of House Targaryen, the heir to the Iron Throne was known as the Prince of Dragonstone.[3] 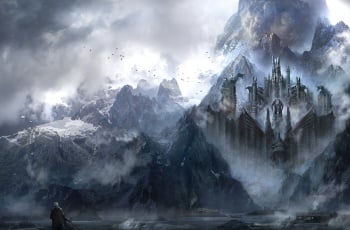 Dragonstone with the castle beneath the Dragonmont, as depicted by Philip Straub in The World of Ice & Fire.

Dragonstone is a volcanic island at the mouth of Blackwater Bay, the second largest after Driftmark,[4] created by the active volcano, Dragonmont. Damp and dreary,[5] it smells of sulfur and brimstone.[6] The island often suffers strong winds and storms in autumn.[7]

Within the tunnels of the Dragonmont are rich chunks of dragonglass, often in boulders and ledges. Most of the obsidian is black, but there are also deposits of green, purple, and red dragonglass.[8]

Farmers and fishermen live in villages below the Dragonmont, with the islanders depending on the sea for sustenance.[9] The castle of Dragonstone is a small fortress located on the face of the volcano. Its nearby port contains taverns, inn, and whorehouses,[9] including a weathered little inn at the end of a stone pier. Standing before the inn is an eroded waist-high gargoyle.[10]

Through the dalliances of many Targaryen lords and princes over the years, many of the smallfolk of the island are descendants of that dynasty, and are known as dragonseeds.[7][9]

Royal fleets from King's Landing and Dragonstone have periodically been sent to deal with pirates in the narrow sea.[11] 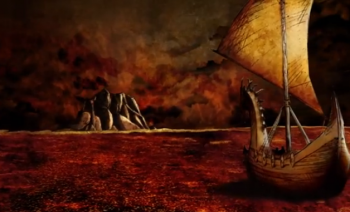 The Targaryens sail to Dragonstone. Screencap from the Game of Thrones Blu-ray.

The isle of Dragonstone was settled two centuries before the Doom by Valyrians who defeated local lords of the narrow sea. They used magic to shape the castle of Dragonstone. When the maiden Daenys Targaryen had visions of the Doom, her father Aenar relocated his family, their five dragons, and all their wealth from the Valyrian peninsula to Dragonstone.[12][13]

House Targaryen became powerful by controlling the Gullet and growing dragons in Dragonstone's hatcheries and firepits;[14][15] the dragons Vhagar and Meraxes were born on their island, for instance. Although the Targaryens were sovereign, their island "kingdom" was not considered one of the Seven Kingdoms of Westeros.[16]

Aegon Targaryen, Lord of Dragonstone, called his friends, bannermen, and allies to Dragonstone before his invasion of the Seven Kingdoms.[14] With the aid of his sister-wives, Visenya and Rhaenys, and three dragons, Aegon the Conqueror received the allegiance of six kingdoms during the Wars of Conquest, with only Dorne resisting.[14][17] Quenton Qoherys, master-at-arms of Dragonstone, became Lord of Harrenhal after the burning of Black Harren during Aegon's Conquest.[18]

Although the growing city of King's Landing became the capital of the newly-united realm, King Aegon I Targaryen continued to spend much of his time at Dragonstone.[19] Maegor Targaryen, the king's younger son, came to be known as the Prince of Dragonstone.[15] After their deaths, the bodies of Aegon I and his successor, King Aenys I Targaryen, were burned on Dragonstone in traditional Valyrian manner.[20]

The fisherfolk of Dragonstone spread word that Elissa Farman had stolen three dragon eggs from the island's hatcheries.[21]

When Corlys Velaryon was sixteen, he sailed Cod Queen from Driftmark to Dragonstone and back.[3]

During the Dance of the Dragons, the island served as the early seat of power for Queen Rhaenyra Targaryen and her black council, and the Velaryon fleet sailed from Driftmark and Dragonstone to blockade Blackwater Bay.[22] Rhaenyra's rival, King Aegon II Targaryen, offered to confirm her control of Dragonstone if she bent the knee, but Rhaenyra refused.[22] The blacks sought out dragonriders from the dragonseeds of the island.[9] The fleet of the Triarchy avoided Dragonstone during the Battle of the Gullet, instead invading Driftmark.[9]

Rhaenyra seized the Iron Throne with the fall of King's Landing.[23] Lord Larys Strong smuggled Aegon II from the capital, however, and Ser Marston Waters took the king to Dragonstone, correctly believing that the queen would not think to look for her rival on her own island.[24] Aegon's dragon, Sunfyre, eventually found its way to its dragonrider as well, killing a wild dragon, the Grey Ghost, during the journey. With the assistance of Ser Alfred Broome and smallfolk, Aegon was able to take control of Dragonstone and its castle.[24]

Rhaenyra returned to her stronghold after the Storming of the Dragonpit. Unaware of the fall of Dragonstone, however, she was captured by Aegon's supporters and then fed to Sunfyre.[24] The golden dragon eventually died there of its own wounds.[25] Alyn Velaryon prepared the Velaryon fleet for an attack on Dragonstone, but Aegon came to an accord with his grandfather, Corlys Velaryon, Lord of the Tides.[25]

After his death, Corlys, the famous Sea Snake, was buried at sea in the deep waters east of Dragonstone.[26]

War of the Usurper

During the War of the Usurper, Rhaegar Targaryen, Prince of Dragonstone, was killed by Robert Baratheon, Lord of Storm's End, in the Battle of the Trident. In response, King Aerys II Targaryen sent Queen Rhaella Targaryen with his new heir, Prince Viserys Targaryen, from King's Landing to Dragonstone. Nine months later, while a fierce storm destroyed the Targaryen royal fleet at Dragonstone, Rhaella died giving birth to Princess Daenerys Targaryen.[27]

Robert I, the new king after Aerys's death during the Sack of King's Landing, ordered his younger brother, Stannis Baratheon, to construct a new fleet and conquer Dragonstone from the remaining Targaryen loyalists. Ser Willem Darry fled with Viserys and Daenerys for the safety of the Braavosian coast before Stannis's ships arrived. Stannis commanded the successful assault on Dragonstone.[27][28][29] Robert then granted the island and its castle to Stannis.[2] Stannis, Lord of Dragonstone, has outlawed prostitution on the island.[10]

Stannis Baratheon, Lord of Dragonstone, returns to his island from King's Landing shortly after King Robert I Baratheon travels north to offer the Hand of the King to Lord Eddard Stark.[30]

While sailing from White Harbor to King's Landing, Storm Dancer survives a storm while passing the island of Dragonstone.[31]

Stannis Baratheon and Melisandre at Dragonstone's harbor, by Tomasz Jedruszek ©

During the War of the Five Kings, the poor lands of Dragonstone give King Stannis few supporters for his claim to the Iron Throne. For the past half-year no craft that has come within sight of Dragonstone has been allowed to leave again. The island's docks are full of ships for Stannis's royal fleet.[10]

Dragonstone's harbor and the dockside streets are largely empty since so many ships were destroyed in the Battle of the Blackwater.[32] Disappointed at Stannis' defeat and considering Melisandre to be a sorceress, many smallfolk return to worshipping the Seven instead of the Lord of Light.[33]

Lord Davos Seaworth has Edric Storm smuggled from the island on Mad Prendos to save him from Melisandre's fires.[34] Stannis and his forces leave Dragonstone to defend Castle Black and the Wall.[35]

Once at the Wall Stannis sends word to Ser Rolland Storm to begin mining obsidian on the island. Stannis fears he will not hold his seat much longer but hopes that the Lord of Light shall grant them enough "frozen fire" to arm themselves against the Others before Dragonstone falls.[8]

Ser Loras Tyrell, realizing that the Redwyne ships are needed elsewhere after the taking of the Shields by the ironborn, volunteers to take command of the siege of Dragonstone, as he feels that Paxter's strategy of starving the castle will take too long.[38] Lord Aurane Waters, the small council's master of ships, later reports to Queen Regent Cersei Lannister that Loras succeeding in taking Dragonstone, but was heavily wounded in doing so and there was high loss of life.[39] Lord Hallyne asks permission from Cersei to allow the Alchemists' Guild access to any dragon eggs found on the island.[39]

The Conqueror was once heard to say that he even loved the scent of Dragonstone, where the salt air always smelled of smoke and brimstone.[19]

The dragons are done. The Targaryens tried to bring them back half a dozen times. And made fools of themselves, or corpses. Patchface is the only fool we need on this godsforsaken rock.[40]

The Freehold's grasp had reached as far as Dragonstone, but never to the mainland of Westeros itself. Odd, that. Dragonstone is no more than a rock. The wealth was farther west, but they had dragons. Surely they knew that it was there.[41]

When the red star bleeds and the darkness gathers, Azor Ahai shall be born again amidst smoke and salt to wake dragons out of stone. Dragonstone is the place of smoke and salt.[42]