From A Wiki of Ice and Fire
Jump to: navigation, search
Not to be confused with Dreadfort. 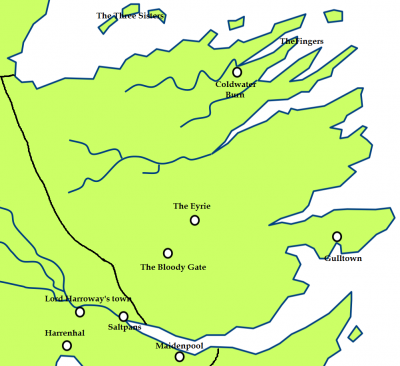 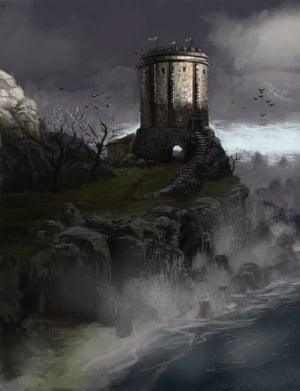 The unnamed tower of House Baelish, by PHATandy ©

The "Drearfort" is a derogatory nickname suggested by Lord Petyr Baelish for the seat of House Baelish in the Vale of Arryn, possibly in reference to the Dreadfort of House Bolton. The Baelish tower does not have a formal name.[2]

The old flint tower is located on the smallest of the Fingers.[3] It has arrowslits for defense but no windows.[2]

An open stone stair winds around the inside wall from the undercroft to the roof, and each of its floors has only one room. The undercroft is likely used for storage. The ground level houses servants—including Umfred, Grisel, Bryen, and Kella—and dogs in the kitchen. The middle floor is a modest hall, and a broken longsword and an oaken shield depicting the titan's head of House Baelish hang above its hearth. There is a little alcove in the hall beneath the stairs. The third floor contains the lord's bedchamber.[2]

The vicinity includes a flock of sheep, a village of a dozen families near a peat bog, and a hermit's cave. There is also one place where the tide comes jetting up out of a blowhole to shoot thirty feet into the air, and another where someone had chiseled the seven-pointed star of the new gods upon a boulder. According to Petyr Baelish, the star marks a landing place during the coming of the Andals to the Vale. It takes only half a day to traverse the territory, and there is no safe anchorage nearby for large ships.[2]

Lady Lysa Arryn marries Petyr shortly after arriving at the tower, and they feast outside. When Marillion tries to seduce Sansa within the hall at night, she is protected by Ser Lothor Brune.[2]

And there it stands, miserable as it is. My ancestral home. It has no name, I fear. A great lord's seat ought to have a name, wouldn't you agree? Winterfell, the Eyrie, Riverrun, those are castles. Lord of Harrenhal now, that has a sweet ring to it, but what was I before? Lord of Sheepshit and Master of the Drearfort? It lacks a certain something.[2]

Chapters that take place at the tower