Drogon is one of the dragons born in the Dothraki sea. Commanded by Daenerys Targaryen, he is named for her dead husband, Drogo.

Drogon is believed to be the reincarnation of Balerion the Black Dread, but Daenerys decides to give him a new name for his new life.[1]

The largest and most aggressive of Daenerys's three dragons, Daenerys has problems reining him in.

Drogon's scales are black, his horns and spinal plates are blood red,and his eyes are smoldering red pits.[2] His teeth are black as well.[3][2] His flame is black fire shot with red and the wash of its heat can be felt thirty feet away. His wing flap sounds like the clap of thunder. He bleeds black blood.[2]

As of A Dance with Dragons, Drogon's wings stretch twenty feet from tip-to-tip, black as jet.[2] Drogon's egg is black as the midnight sea, alive with scarlet ripples and swirls.

The maegi Mirri Maz Duur proclaims that in order to bring new life one must give life. Daenerys Targaryen burns the body of her deceased husband, Khal Drogo, along with Mirri Maz Duur herself and the three eggs, giving life to Drogon and his brothers, Viserion and Rhaegal.[4]

When Daenerys arrives in Qarth, Drogon along with the other dragons are a marvel to the inhabitants of the ancient city.[1][5][6] Drogon is on her shoulder when she enters Qarth.[5]

When Daenerys receives the news from Quhuru Mo of Robert I Baratheon's death Drogon is seated in her lap. He hisses and pale smoke rises before Daenerys's face like a veil.[5]

When Daenerys enters the House of the Undying, she has Drogon accompany her. Once inside, Drogon reacts to the visions that Daenerys has. When they come upon the Undying, Drogon defends Daenerys by attacking the pulsating heart that stands at the center of the room, thereby slaying the Undying. This allows Daenerys to escape the House and seems to have seriously damaged the structure itself.[7]

Drogon is slightly larger than the size of a small dog. Drogon is part of the payment that Daenerys agrees to in order to pay for all Unsullied in Astapor. However, once she has received the Unsullied, she orders the Good Masters killed and Drogon returns to Daenerys.[8] 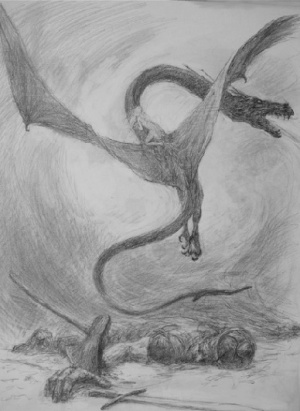 A man appears before Daenerys in her throne room, carrying a sack with bones in it, claiming it is his child Hazzea and that Drogon had killed and eaten her.[10] He calls Drogon the winged shadow. Horrified, Daenerys orders all three dragons to be captured and imprisoned in a pit inside of her Great Pyramid. Viserion and Rhaegal are eventually chained (though not without cost) in a makeshift dragonpit in the Great Pyramid, but Drogon escapes and disappears.

When the fighting pits are re-opened, Drogon appears above Daznak's Pit, drawn by the noise and smell of blood. Drogon descends into the pit and kills the boar that is present. He sets much of the arena ablaze once provoked, and causes chaos and carnage as the citizens flee and trample one another. An animal handler named Harghaz attacks Drogon with a long spear and comes close to slaying him. Daenerys, seeing her "child" in peril, runs to him just when Drogon kills Harghaz. After much difficulty, losing her hair and clothing after he bathes her in dragonfire, Daenerys manages to use a whip to berate and mount Drogon, then fly away on his back.[2]

Drogon takes Daenerys to his lair in Dragonstone in the Dothraki sea. Later, just after Drogon has killed and devoured a horse on the plains, he and Daenerys are discovered by the khalasar of Khal Jhaqo.[11]