According to semi-canon sources, Elaena was not a great beauty in her youth, unlike like her sisters. At age eleven, she was described as a "skinny little thing", awkward and angular, shy and charming by turns. However, her beauty matured as she grew older, and its was said that she was more beautiful at age seventy than at age seventeen. Her eyes were a soft lilac, her mouth thin-lipped and often angry. Her hair was a platinum white with a bright golden streak down the middle, an unusual color even for the Targaryens. She wore it long, pulled back, and braided, and was always being told it was her crowning beauty. However, she cut off her braid to defy her brother Baelor for imprisoning her in the Maidenvault, and afterwards wore her hair short for years.

As a child, Elaena liked to dress in black, simply because her older sister Daena also dressed in black. In character, she had more than a little of Daena's willfulness, as she would prove when she grew older. Elaena was also shrewd and intelligent, especially with money.[4]

Born in 150 AC, Elaena was the third daughter and youngest child of King Aegon III Targaryen and Queen Daenaera of House Velaryon. She had two older brothers, Daeron and Baelor, and two older sisters, Daena and Rhaena.[5] Elaena's most cherished possession was a dragon's egg whose stony shell showed the same colors as her hair.[4] 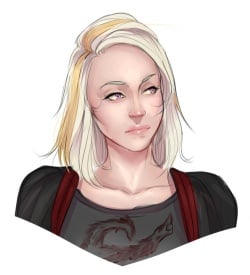 Elaena's brother, Baelor I Targaryen, came to the throne in 161 AC, when she was eleven. Shortly thereafter Baelor the Blessed imprisoned Elaena and her sisters in their own "Court of Beauty", in the part of the Red Keep that would become known as the Maidenvault, to preserve their innocence and so the sight of them would not tempt him or others in his court to mortal lusts. The three sisters were known afterwards as the "Three Maids in the Tower". Elaena hated her imprisonment, and had always been told that her hair was her "crowning glory"; so, she cut off her braid and sent it to Baelor, hoping that if she rid herself of her beauty, he would allow her out of the Maidenvault. Her pleas fell on deaf ears, and she remained in the Maidenvault until Baelor's death in 171 AC.[4][3]

After Baelor died, there were some amongst the smallfolk and the lords who felt that Elaena's eldest sister Daena should inherit the throne, as she was Aegon III's eldest surviving child. However, Daena had been isolated for a decade in the Maidenvault, which had left her and her sisters without powerful allies. The memories of the Dance of the Dragons and of Rhaenyra Targaryen, the last woman to sit the Iron Throne, left many wary of the idea of a ruling queen. The precedents of the Great Council of 101 AC and the Dance were cited, the claims of Daena and her sisters were set aside, and Elaena's uncle was crowned King Viserys II Targaryen.[6] 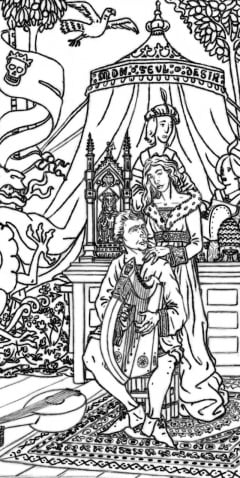 After being freed from the Maidenvault, Elaena outlived her siblings and led a tumultuous life. Although Elaena had three husbands during her lifetime, the great love of her life was her cousin, Lord Alyn Velaryon. She gave birth to two bastard children by him, the twins Jon and Jeyne Waters.[4] Elaena had hoped to marry Alyn, but he was lost at sea; a year after his disappearance, she gave up hope and agreed to marry another.[3]

In 176 AC, during the reign of King Aegon IV Targaryen, Elaena married her first husband, the wealthy but elderly Lord Ossifer Plumm. He died on their wedding night (supposedly after seeing her naked), but Elaena became pregnant and gave birth to a son, called Viserys Plumm. There were those who were dubious of the boy's parentage,[3][7] and had suspicions on who might actually be the boy's father.[3][8] None dared speak their suspicions aloud, however.[3]

Elaena married her second husband, Lord Ronnel Penrose, in the reign of King Daeron II Targaryen. He sat on the king's small council as master of coin; but it was widely known that Elaena was the one performing the duties, as she was shrewd and intelligent with money, while Ronnel did not have a great facility for numbers. King Daeron trusted her with many important matters of state, and she grew influential.[4][3] Elaena birthed Ronnel four children: Robin, Laena, Jocelyn, and Joy Penrose.[5] After the birth of her seventh child, Elaena declared that if seven was sufficient for the gods, it would do for her as well.[4]

Not long after Ronnel's death, Elaena married once more, for love and by her own choosing. With King Daeron II's blessing, Elaena was married to Ser Michael Manwoody, a Dornishman who had attended the court of Queen Myriah Martell. Michael was sent as an envoy to Braavos on several occasions, and there is record of correspondence between him and the keyholders of the Iron Bank. These letters, while signed with Michael's name and fixed with his seal, appear to have been in the handwriting of Elaena. While her husband was a cultured man of great wit and learning, Elaena said it was not those traits that had caused her to fall in love with him, but his love of music, and he was known to play the harp for her. When Michael died, Elaena commanded his effigy to be carved with him holding a harp, instead of the sword and spurs of knighthood.[3]

A descendant of Elaena's son Viserys Plumm crossed the narrow sea, and became the ancestor of Brown Ben Plumm.[8][1] Elaena's bastard son Jon Waters had a son who changed his last name to Longwaters, to show that he was trueborn himself, and his descendants still live in the crownlands today. One, Rennifer Longwaters, is the chief undergaoler of the Red Keep, and is fond of explaining his descent from a Targaryen princess, though he is not often believed.[9]

Daenerys: He likes you, Ben.


Ben: And well he might. I have me a drop of the dragon blood myself, you know.
Daenerys: You? How could that be?


Ben: Well, there was some old Plumm in the Sunset Kingdoms who wed a dragon princess. My grandmama told me the tale. He lived in King Aegon's day.[1]
—Daenerys Targaryen and Ben Plumm

Rennifer: I am not one to boast, but there is royal blood in my veins. I am descended from a princess. My father told me the tale when I was a tad of a lad. She was the fairest treasure of the Maidenvault. Lord Oakenfist the great admiral lost his heart to her, though he was married to another. She gave their son the bastard name of "Waters" in honor of his father, and he grew to be a great knight, as did his own son, who put the "Long" before the "Waters" so men might know that he was not basely born himself. So I have a little dragon in me.
Jaime: Yes, I almost mistook you for Aegon the Conqueror.[9]