Ellaria Sand is the beloved paramour of Prince Oberyn Martell, and the mother of the four youngest "Sand Snakes," Oberyn's bastard daughters. Ellaria herself is the bastard daughter of Harmen Uller, Lord of Hellholt. In the television adaptation Game of Thrones she is portrayed by Indira Varma.

Although not accounted as a beautiful woman, Ellaria is regarded as attractive and eye-catching, with an exotic, sensuous flair.[2] She has black hair.[3] She is described as a good woman, strong and brave, with a gentle heart.[4] Ellaria is believed to worship a Lysene love goddess,[2] and is described by Oberyn Martell as being sexually adventurous and potentially bisexual.[3] Angry at Oberyn for having crippled Willas Tyrell, Olenna Tyrell disparages Ellaria as "the serpent's whore".[1]

Ellaria accompanies Oberyn to King's Landing when Oberyn takes the seat on the small council offered to Doran Martell, Prince of Dorne.[3] She is a guest at the royal wedding of King Joffrey I Baratheon and Margaery Tyrell, seated with other Dornishmen at a place of honor away from the Tyrells.[5] Oberyn hints that Ellaria wants to sleep with Cersei Lannister.[3][6] Ellaria is also present at the trial by combat for Tyrion Lannister, and she witnesses Oberyn's death at the hands of Ser Gregor Clegane.[7]

After Oberyn's death, Ellaria escorts his remains back to Dorne. She is secluded in the Water Gardens with her daughters by Prince Doran after the arrest of the eldest Sand Snakes, to prevent them from being used in the plots of others.[8] 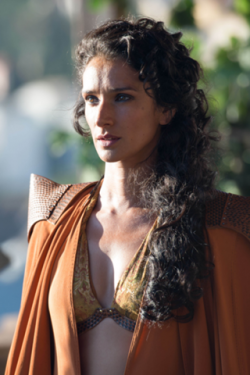 Indira Varma as Ellaria in Game of Thrones

Ellaria is present at the feast when Ser Balon Swann delivers the head of Gregor to Prince Doran.[4] Ellaria is later summoned to Doran's private chambers and becomes distraught when she hears Obara Sand's statement that Gregor's death "is a start". Ellaria wants it to be an end with Tywin Lannister, Robert Baratheon, Amory Lorch and now the Mountain dead, which is everyone who was part of the death of Elia and her children. Ellaria fears for her own daughters, who admire Obara, Nymeria, and Tyene Sand, and fears where the quest for revenge will lead them. Doran comforts her and tells her to go to her girls.[4]

Ellaria is returning to her father Harmen Uller's seat at Hellholt with her daughter Loreza.[9]

Oberyn wanted vengeance for Elia. Now the three of you want vengeance for him. I have four daughters, I remind you. Your sisters. My Elia is fourteen, almost a woman. Obella is twelve, on the brink of maidenhood. They worship you, as Dorea and Loreza worship them. If you should die, must El and Obella seek vengeance for you, then Dorea and Loree for them? Is that how it goes, round and round forever? I ask again, where does it end? I saw your father die. Here is his killer. Can I take a skull to bed with me, to give me comfort in the night? Will it make me laugh, write me songs, care for me when I am old and sick?[4]

Shae had told her that this Ellaria worshiped some Lysene love goddess. "She was almost a whore when he found her, m'lady," her maid confided, "and now she's near a princess." Sansa had never been this close to the Dornishwoman before. She is not truly beautiful, she thought, but something about her draws the eye.[2]

Even weeping, she has a strength in her.[4]

Nymeria: I know she loved our father well, but it is plain she never understood him.
Doran: She understood more than you ever will, Nymeria. And she made your father happy. In the end a gentle heart may be worth more than pride or valor. Be that as it may, there are things Ellaria does not know and should not know. This war has already begun.[4]