The First Dornish War was the second of the Wars of Conquest. House Targaryen began the war in an attempt to conquer Dorne, the only one of the Seven Kingdoms that had successfully resisted the Targaryens during Aegon's Conquest.[1][2]

During Aegon's Conquest, Queen Rhaenys Targaryen was sent to conquer Dorne in her brother's name. Instead of confronting the Dornish spearmen guarding the Prince's Pass in the Red Mountains, Rhaenys flew over the pass on her dragon Meraxes to Vaith and Godsgrace. She found the castles abandoned an continued her journey to the Planky Town, where only women and children remained. At Sunspear, the seat of House Martell, she found Meria Martell, the aged Princess of Dorne, waiting in her otherwise abandoned castle. Meria defied Rhaenys, stating that they would neither fight nor kneel. Rhaenys warned the Princess of Dorne that the Targaryens would return "with fire and blood", but Meria replied simply with "You may burn us, my lady, but you will not bend us, break us, or make us bow. This is Dorne. You are not wanted here. Return at your peril." Rhaenys departed, but the Targaryens subsequent made no direct attempt to conquer the harsh deserts of Dorne, instead focusing on their main conquests in the heart of Westeros.[3]

As such, Dorne was the only kingdom not to be conquered by Aegon I Targaryen in his initial conquest.

In 4 AC, King Aegon I Targaryen launched an invasion of Dorne, intend on completing his conquest of the Seven Kingdoms. However, although House Wyl led an assault against the Targaryen forces in the Boneway, the other Dornish lords abandoned their castles, neither willing to defend them nor willing to bend the knee.[1]

The first assault was led by Queen Rhaenys Targaryen. On her way to Sunspear, she seized the Dornish seats she encountered and had her dragon Meraxes burn the Planky Town. Meanwhile, King Aegon I and Lord Harlan Tyrell fought in the Prince's Pass, facing heavy resistance as their forces were ambushed by Dornish defenders who fled and hid as soon as the dragons took to the air, and Lord Orys Baratheon led a force through the Boneway. Lord Harlan Tyrell, while leading his army to Hellholt, saw many of his soldiers die of thirst and due to the heat. Those who finally managed to reach Hellholt found the castle to be deserted.[1]

King Aegon briefly besieged Yronwood, which was defended by a few handful of old men, boys, and women. He found Skyreach abandoned, but at Ghost Hill was challenged to single combat by Lord Toland's champion. After Aegon had killed the man with Blackfyre, he discovered that the "champion" had in truth been Lord Toland's mad fool. Worse, Ghost Hill turned out to be deserted as well.[1]

Lord Orys Baratheon fared worse in his assault up the Boneway. His army was pelted with rocks, arrows, and spears from above, while his men were murdered in the night. Towards the end, the Dornishmen blocked the Boneway both in front of Orys's army and behind, and the Wyl of Wyl managed to capture Lord Orys and many of his bannermen and knights. They would remain captives of House Wyl until 7 AC.[1][4]

When the Targaryens finally arrived at Sunspear, they discovered that Princess Meria had vanished. Declaring themselves victorious, King Aegon and Queen Rhaenys placed Dorne under the rule of the Iron Throne. They returned to King's Landing, leaving Lord Jon Rosby as castellan of Sunspear and Warden of the Sands, and charged Lord Harlan Tyrell with putting down any revolts that might arise.[1] 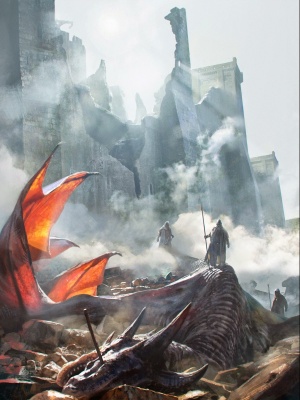 Meraxes and Rhaenys Targaryen are killed during the First Dornish War, as depicted by Chase Stone in The World of Ice & Fire.

Aegon and Rhaenys had only just returned to King's Landing when the Dornish rebelled against the Targaryens. From Sunspear's shadow city Dornishmen came forth, retaking the castle. Lord Rosby was captured, and thrown from a window atop the Spear Tower by Princess Meria Martell.[1] In 5 AC, Lord Harlan Tyrell marched his army from Hellholt, intend on taking Vaith and Sunspear. In the deserts of Dorne the entire army disappeared.[5]

Elsewhere, entire garrisons were put to the sword. The knights who had been in charge of the garrisons were horrifically tortured and mutilated.[1] Lord Wyl, called the Wyl of Wyl and the Widow-lover, eventually agreed to ransom back Lord Orys Baratheon and the other captured lords. In 7 AC, the captives were ransomed back for each man's weight in gold and set free. However, the Wyl of Wyl took off their sword hands, so they could "never take up arms against Dorne again". Orys became bitter and obsessed with revenge, and resigned his office as Hand of the King.[1]

Intent on revenge, King Aegon I unleashed his dragons. The castles who remained defiant were burned time and time again, whereupon the Dornishmen retaliated in 8 AC by setting half the rainwood on Cape Wrath ablaze and sacked half a dozen towns and villages.[1]

In 9 AC, the dragons struck again, burning several seats. The next year, Lord Fowler attacked Nightsong, taking its defenders hostage, while Ser Joffrey Dayne marched an army to Oldtown and razed the fields and villages nearby. The Targaryens unleashed their dragons a third time, this time upon Starfall, the seat of House Dayne, Skyreach, the seat of House Fowler, and Hellholt, the seat of House Uller. At Hellholt, the dragon Meraxes was shot down from the sky, with Queen Rhaenys Targaryen upon her back, when a bolt from a scorpion pierced the dragon's eye. Although Meraxes destroyed the castle's highest tower and part of its curtain wall in its fall, the death of both dragon and queen was the greatest success the Dornish had against the Targaryens.[1]

The grief Aegon and Visenya felt at the death of Rhaenys was great; the next two years would later be called the years of the Dragon's Wroth. The Targaryens burned every Dornish stronghold at least once, with the exception of Sunspear and its shadow city. The Dornish believed that the Targaryens refused to attack Sunspear because they were afraid that Princess Meria might have purchased a device from Lys to slay dragons with. Archmaester Timotty offers a different explanation, suggesting in his Conjectures that Aegon hoped this would instead turn the Dornish against the Martells. Indeed, letters have been discovered in which Marcher lords urge Dornish lords to surrender, while claiming that House Martell had purchased their safety from the dragons. Regardless of the truth, the Dornish lords and smallfolk remained loyal.[1]

Aegon and Visenya also placed bounties on the heads of Dornish lords, who, in turn, placed bounties on the Targaryens and their allies. Half a dozen Dornish lords were successfully assassinated, though only two of their killers ever lived to collect their bounties.[1] King Aegon was attacked on three occasions, and Visenya was attacked on several occasions as well. One day, when Aegon and Visenya were assaulted on the streets of King's Landing, only Visenya's swift intervention saved Aegon's life. This attack led to the creation of the elite royal bodyguard known as the Kingsguard in 10 AC.[1][2] Lord Fell was killed in a brothel in King's Landing,[1] while the Wyl of Wyl committed atrocities, particularly in Fawnton and Old Oak.[1]

Although Dorne was a blasted, burning ruin from the Red Mountains to the mouth of the Greenblood, the Dornish continued to fight.[1]

The First Dornish War came to an end in 13 AC, when, following the death of Princess Meria Martell, her elderly son Nymor, now the ruling Prince of Dorne, sent his daughter Deria to King's Landing with an escort as an peace envoy. She brought with her the skull of Rhaenys's dragon Meraxes and a letter from Prince Nymor. The sight of the dragon's skull angered many at the royal court, such as Queen Visenya Targaryen and Lord Orys Baratheon, but Aegon refused to act against the delegation. Instead, Deria was allowed to deliver her father's terms. Prince Nymor wanted peace, but would not submit to the Iron Throne. Aegon was determined to refuse this offer, until Deria handed him her father's letter.[1]

Atop the Iron Throne, Aegon read the message. When he was done, he burned the letter, after which he left for Dragonstone upon Balerion's back. He returned the next morning, agreed to the peace terms of Prince Nymor and signed a treaty. The contents of the letter are unknown, although many have speculated: some believe it said that Rhaenys survived her fall at Hellholt, but was being kept captive in extreme torment, and the Dornish promised to end her suffering Aegon agreed to end the war; others suspect the letter stated that Nymor was willing to spend all of Dorne's gold to hire the Faceless Men of Braavos to assassinate Aegon's young son and heir, Aenys, if Aegon did not sign the peace.[1]

Whatever had been in the letter, the result was an end to the nine-year war.

Although other Dornish wars would come, the peace treaty Aegon had signed lasted throughout his own reign. Aegon kept up good relations with Princess Deria, and visited Sunspear together with his eldest son, Aenys, on the tenth anniversary of the peace in 23 AC for a "feast of friendship". Father and son came to Sunspear upon their dragons, Balerion and Quicksilver.[6] Both of Aegon's sons, Aenys I and Maegor I, made sporadic attempts to add Dorne to the realm during their reigns.[3] Additionally, the Dornishmen opposed the Targaryens on several occasions during the peace. After the death of Aegon I, an outlaw known as the Vulture King rose in the Red Mountains of Dorne, gathering an army thirty some thousand strong. Although Princess Deria claimed the Dornish did all they could to put an end to the Vulture King, in truth they mostly ignored it. In the end, it came down to the Marcher lords to defeat the Vulture King, which they did during the Vulture Hunt.[7]

In 48 AC, as King Maegor I Targaryen's tyrannical reign was falling apart, reports came in from the Dornish marches in the last months of his reign suggesting that the Dornishmen were gathering their forces in the mountain passes, preparing to invade the realm.[6]

During the reign of King Viserys I Targaryen, King Viserys's brother Daemon and Lord Corlys Velaryon became involved in a struggle with the Triarchy over the Stepstones. Prince Qoren Martell gave his support to the Triarchy in this struggle.[1]

Several decades later, Daeron I Targaryen decided to complete the Conquest with his own conquest of Dorne. And although he succeeded, his success did not last long, and it came at a high price.[8]