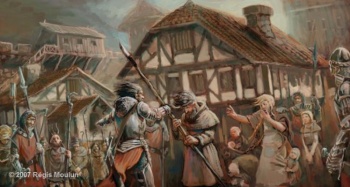 Flea Bottom is the poorest slum in King's Landing, the foulest and most lawless district of the city.

Flea Bottom is a down-trodden area of town, rife with poverty and crime. It is a maze of twisty, unpaved alleys and cross-streets below the Street of Flour on the way down the east side of Rhaenys's Hill. The buildings lean over the narrow alleys, almost touching. The air is filled with the stench of pigsties, stables, and tanner's sheds, mixed in with the smell of winesinks and whorehouses.[1] Gambler's dens and rat pits are also found there.[2]

In cheap pot-shops along the alleys one can get a 'bowl o' brown' - a kind of thick stew with vaguely discernable meat of dubious origin.[3]

King's Landing began as a boom-town after the Targaryen Conquest, but no one planned it - it simply grew. What had started as Aegon I Targaryen's initial foothold and stockade on the mainland mushroomed in size so quickly and haphazardly that several slum districts developed, the largest and worst of which was Flea Bottom. By 10 years after the Conquest King's Landing had reached the size of a true city, almost as large as Gulltown or White Harbor. By 25 years after the Conquest, it had outgrown both of them in size, surpassed only by Lannisport and Oldtown.[4] It is unclear when the slum known as Flea Bottom first congealed out of the mud during this rushed expansion, but the earliest chronological mention of Flea Bottom is in 49 AC.[5]

During the terrible winter of 59 AC, when the plague known as the Shivers struck Westeros, King's Landing was badly affected. So many of the City Watch died in the plague that the city outside of the Red Keep itself was reduced to lawlessness and looting. Master of Coin Rego Draz was killed in Flea Bottom during this time by an angry street gang, who cut the gemstones from his dead fingers.[6]

The Bottom had a stench to it, a stink of pigsties and stables and tanner's sheds, mixed in with the sour smell of winesinks and cheap whorehouses.