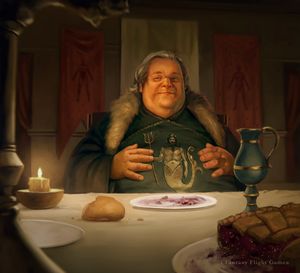 The Frey Pies Theory suggests that Wyman Manderly orders the killing of three Freys (Rhaegar, Symond, and Jared) who disappeared on the way from White Harbor to Barrowton, and Lord Manderly then has them baked them into the three huge meat pies he brings for Ramsay Bolton's wedding at Winterfell.

Theon: Did you find your cousins, my lord?
Walder: No. I never thought we would. They're dead. Lord Wyman had them killed. That's what I would have done if I was him.[2]

The best pie you have ever tasted, my lords. Wash it down with Arbor gold and savor every bite. I know I shall.[3]