Gerion Lannister was a member of House Lannister, and was the youngest brother of Tywin Lannister, Lord of Casterly Rock.

Gerion was the youngest and most reckless brother of Lord Tywin Lannister. He was said to be a man quick to laugh and had a gift for making others laugh.[1]

Tyrion and Jaime Lannister often refer to Gerion as their favorite uncle.[2][7]

Gerion was born at Casterly Rock[4] in 255 AC, the fifth child and fourth son of Tytos Lannister, Lord of Casterly Rock, and his wife, Lady Jeyne Marbrand. He was healthy, but his mother died within a month of his birth.[3] Though Tytos was greatly saddened by the death of his wife, he soon became enamored of Gerion's wet nurse and made her his first mistress.[3]

Like his brothers, Kevan and Tygett, Gerion was overshadowed by their older brother, Tywin. While Kevan built up a life at Tywin's side, and Tygett tried to be independent, Gerion mocked this "game" and made jokes.[8] Gerion's relationship with his eldest brother was notoriously stormy.[9] At sixteen, Gerion visited the Free Cities on his coming of age tour.[10]

Gerion once gifted Tyrion on his name day with the books Wonders and Wonders Made by Man by Lomas Longstrider, and often had Tyrion recite the sixteen wonders of the world.[10] Once when Tyrion was young, he begged his uncle for a dragon for his nameday present, which Gerion found hilarious.[11] Gerion also taught Tyrion some tumbling tricks when he was six or seven,[12] and would praise his skills.[13]

In 276 AC, Gerion participated in the tournament in honor of Viserys's birth at Lannisport, but he was unhorsed by Prince Rhaegar Targaryen.[14][9] 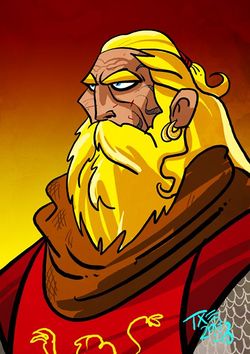 Robert's Rebellion put an end to the rule of House Targaryen over Westeros and the young Lord of Storm's End, Robert Baratheon took the Iron Throne. In order to solidify his rule, Robert married Gerion's niece, Cersei Lannister. Gerion offered a gilded dagger with an ivory grip and a sapphire pommel as a wedding gift to the new king.[1]

Circa 291 AC,[5] Gerion went on a quest to find House Lannister's ancestral Valyrian steel greatsword, Brightroar, and any other treasures that might have survived the Doom of Valyria.[1][17] Almost a decade passed after his ship, the Laughing Lion, left Lannisport, but Gerion never returned. Lord Tywin sent men to look for his lost brother and they traced him as far as Volantis, where half his crew had deserted him because of his intent to sail into the Smoking Sea. He had been forced to buy slaves to replace them.[17]

That shadow Tywin cast was long and black, and each of them had to struggle to find a little sun. Tygett tried to be his own man, but he could never match your father, and that just made him angrier as the years went by. Gerion made japes. Better to mock the game than to play and lose. But Kevan saw how things stood early on, so he made himself a place by your father's side.[8]