Ser Gerold Hightower, known as the White Bull, was a knight from House Hightower and the Lord Commander of the Kingsguard during the reigns of kings Jaehaerys II Targaryen and Aerys II Targaryen.[3][4] He was the uncle of Lord Leyton Hightower of Oldtown.[5] An amalgamation of Gerold and Ser Oswell Whent is portrayed by Eddie Eyre during a flashback in Season 6 in the television adaptation Game of Thrones.[6]

Gerold was considered to be fierce, despite his old age,[3] and in his heyday, he would have been stronger than Jaime Lannister at his prime.[7]

It is unknown when Gerold joined the order of the Kingsguard. The young Gerold[N 1] became Lord Commander in 259 AC, following the death of his predecessor, Ser Duncan the Tall.[4] During the War of the Ninepenny Kings, Gerold took command of the royal forces after the death of the Hand of the King, Lord Ormund Baratheon.[4] After the war, he accepted Ser Barristan Selmy into the order.[8][9]

Around 280 AC/281 AC, Gerold was shot through the hand by Ulmer, an outlaw of the Kingswood Brotherhood, who went on to steal a kiss and some jewels from Princess Elia Martell of Dorne.[10] In 281 AC, at the tourney at Harrenhal, Gerold fastened the white cloak of the Kingsguard about the shoulders of the newest member, Ser Jaime Lannister.[11] That evening, when King Aerys II Targaryen ordered Jaime to return to King's Landing to guard Queen Rhaella and Prince Viserys, Gerold offered to go in Jaime's stead, so Jaime could remain at Harrenhal and take part in the tourney, but Aerys refused.[12][13] 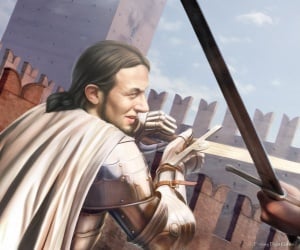 Gerold was present when King Aerys II Targaryen burned Lord Rickard Stark alive in the Red Keep's throne room, and while Brandon Stark strangled himself to death. After the two Starks died, Gerold took Ser Jaime Lannister aside and reminded him they were sworn to defend the king, not to judge him.[14]

During the ensuing rebellion, after the Battle of the Bells, Gerold was sent to find Prince Rhaegar.[15] While Rhaegar eventually returned to King's Landing, Gerold did not. He was next seen at the tower of joy in the Red Mountains of Dorne, with two of his sworn brothers, Ser Arthur Dayne and Ser Oswell Whent,[3] both of whom had been with Rhaegar when he disappeared originally.[15] Here, they were guarding Lyanna Stark.[15][3]

The three Kingsguard were eventually found at the tower by Lyanna's brother, Lord Eddard Stark of Winterfell, and six of Eddard's companions. After a short conversation with Eddard, during which the three knights refused several opportunities to leave unharmed, combat ensued in which Gerold died.[3] Stones from the tower were used to build his cairn upon a nearby ridge.[3]

Bran Stark, who wishes to become a knight of the Kingsguard someday, lists the members of the order he knows from songs and Old Nan's stories, among them is Ser Gerold.[1]

Lord Eddard Stark has a fever dream of Gerold, Ser Arthur Dayne, and Ser Oswell Whent at the tower of joy.[3]

Resting on a weirwood stump, Ser Jaime Lannister dreams of he and Brienne of Tarth being visited by the shades of Gerold, Oswell, Arthur, Ser Jon Darry, Prince Lewyn Martell, and Prince Rhaegar Targaryen in the depths of Casterly Rock.[12]

The Kingsguard does not flee.[3]

That was the White Bull, loyal to the end and a better man than me, all agree.[14]

I learned from the White Bull and Barristan the Bold. I learned from Ser Arthur Dayne, the Sword of the Morning, who could have slain all five of you with his left hand while he was taking a piss with the right. I learned from Prince Lewyn of Dorne and Ser Oswell Whent and Ser Jonothor Darry, good men every one.[9]

Gerold was a member of House Hightower. He had at least one brother, who went on to continue the Hightower line. Gerold was the uncle of Lord Leyton Hightower, and thereby the great-uncle of Leyton's ten children.[5]