Ghiscari legions[1][2] are highly-disciplined military units of free men from Ghiscar in central Essos. Lockstep legions were used by the Old Empire of Ghis five thousand years ago,[3] while the island city of New Ghis now uses iron legions.[4] The lockstep is a way of marching in which the marchers follow each other as closely as possible. The legions were reputed to be nearly unbeatable on the battlefield. The Good Masters of Astapor claim that their eunuch slave soldiers, the Unsullied, are comparable to the lockstep legions of old.[3] 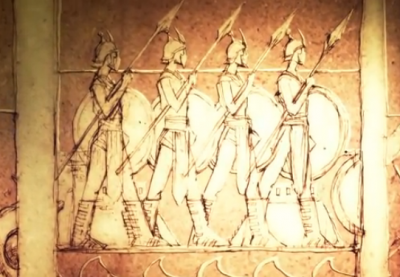 According to Ghiscari histories, the lockstep legions were established by Grazdan the Great, the legendary founder of Ghis. The legionaries were free men who wielded a shield and three spears. With their lockstep discipline and absolute obedience, the Old Empire of Ghis conquered neighboring nations and colonized cities.[4]

The Old Empire was defeated in five wars against the Valyrian Freehold, however, and the legions were shattered by dragonlords in the fifth and final war. The Valyrians marched on Old Ghis and destroyed the city.[3][4]

The modern iron legions of New Ghis are trained and armed in the same manner as the Unsullied of Astapor, but the eunuchs know no other life, whereas the Ghiscari are free citizens who serve for three year terms.[5] Iron legions utilize shield walls and are led by serjeants in iron halfhelms with horsehair crests.[5]

Kraznys mo Nakloz claims to Daenerys Targaryen and Missandei that the Unsullied of Astapor are the lockstep legions of Old Ghis come again, as they are absolutely obedient, absolutely loyal, and utterly without fear.[3]

New Ghis allies with Yunkai against Daenerys, who has freed the Unsullied, conquered the Ghiscari city Meereen, and abolished slavery in the three Slaver Cities. Two iron legions fight in the battle at the Horns of Hazzat.[6] During the siege of Astapor by Yunkai, a legion slaughters the new Unsullied of Cleon the Great, and legions burn the Temple of the Graces during the city's sacking.[1] Four Ghiscari legions march north on the coastal road toward Meereen, while two more take ship at Astapor.[2]

During the second siege of Meereen, Daenerys observes two iron legions encamped north of Meereen, across the river Skahazadhan, and two others to the east of the city, choking off the Khyzai Pass.[7] The bloody flux, brought to Meereen by refugees from Astapor, spreads across the river to a third legion.[7]

Sailing near Astapor, the Iron Fleet captures two galleys which were returning to New Ghis for supplies and reinforcements for legionaries lost to the bloody flux.[8]

Ser Barristan Selmy observes the fortified encampments of two legions in the Yunkish camp west of Meereen, between two trebuchets.[9] When the Unsullied advance on one of the trebuchets, the Harpy's Daughter, it is defended by the Company of the Cat and two legions.[10] According to a semi-canon source, the Harridan trebuchet is defended by a legion six thousand strong.[11]