From A Wiki of Ice and Fire
Jump to: navigation, search
For other uses, see Ghost (disambiguation).

Ghost is an albino direwolf bonded to Jon Snow. Ghost is the litter-mate of Grey Wind, Lady, Nymeria, Summer, and Shaggydog.

Ghost is an albino,[3] with thick white fur,[4] red eyes,[5] and a bushy tail.[6] At the outset, Ghost is the smallest of his pack, but he eventually grows to be larger than his litter mates.[7] He receives his name from Jon because of his fur color and the fact that he never makes a sound.[8] The direwolf does not whine or howl,[9] but sometimes bares his teeth in a silent snarl.[10][11] Jon has noted that Ghost's red eyes are similar to the faces on weirwood heart trees carved by the children of the forest.[12]

Ghost enjoys tugging Jon's hand back and forth as a game,[13] and also enjoys rolling in fresh snow.[14] 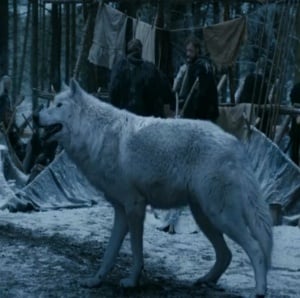 Ghost in Game of Thrones

Along with his litter-mates, Ghost is discovered by the Stark children after his mother was killed by a stag. Ghost was the first pup to open his eyes and had wandered off unnoticed by the time the Starks arrived. Jon Snow convinces his father, Lord Eddard Stark, to allow his children to keep the pups by noting that the five remaining pups match the five Stark children, excluding himself. Only afterwards does Jon hear Ghost nearby, the only one of the humans to do so. Theon Greyjoy wants to kill the albino pup, but Jon claims him.[3] During the feast for King Robert I Baratheon at Winterfell, the young Ghost defends his meal from a bitch three times his size.[8]

Ghost accompanies Jon to the Wall when the youth joins the Night's Watch. The direwolf joins Jon when he hunts for food for Jeor Mormont, Lord Commander of the Night's Watch,[5] and Ghost cheers Samwell Tarly by licking away the boy's tears.[5] Jon threatens Rast with Ghost to prevent further bullying of Sam.[5]

At the weirwood grove beyond the Wall, Ghost tears off the right hand of the dead Jafer Flowers. The growing direwolf wakes Jon by scratching at his door that night, alerting Jon to the presence of wights, and they are able to save Jeor Mormont, Lord Commander of the Night's Watch, from the undead Othor. Ghost bites the wight's severed arm and tears into its belly.[15] In gratitude, Jeor gifts Jon with the Valyrian steel sword Longclaw, having replaced the ruined bear's head pommel with that of a white wolf's head in the likeness of Ghost, although Jon believes Ghost is the one who deserves to be honored.[16]

When Jon deserts the Night's Watch, Ghost disappears near Mole's Town. The direwolf later returns and betrays the hiding Jon's position so that his friends can bring him back to Castle Black.[17]

During the great ranging, Ghost hunts well away from the main column of Night's Watch,[1] often at night.[18] Gilly is frightened by the direwolf, who kills two rabbits at Craster's Keep. Ghost gives one of the rabbits to Jon instead of Lark.[19]

Ghost discovers a cache of dragonglass weapons near the Fist of the First Men and leads Jon to it.[20]

Ghost accompanies Jon during Qhorin Halfhand's scouting mission into the Frostfangs. Sometimes during sleep, Jon inhabits Ghost's body through a warg bond, although he does not seem to fully understand it at first. He dreams of his lost siblings, and Jon hears Ghost howl mournfully in one dream.[21] The eagle of Orell gashes Ghost with its talons, but is unable to break the direwolf's neck.[21] Jon is captured by Rattleshirt's wildlings in the Skirling Pass. When Qhorin forces Jon into a duel, Ghost bites the Halfhand's calf and Jon uses the distraction to kill the ranger.[22]

After Jon is brought to Mance Rayder's host, the youth uses Ghost to keep Ygritte away from him at night. Ygritte eventually seduces Jon, however.[10]

Before ascending the Wall with Styr's group, Jon sends Ghost away with instructions to go to Castle Black.[9] He does not know if Ghost understands his instructions and does not hear of Ghost's whereabouts for a great while. By the time Jon returns to Castle Black, he seems to have attained at least a tentative acceptance of his warg powers.[23] Ghost is still missing beyond the Wall, however, and Jon cannot sense him.[12][24] After a few eventful days, Jon crosses over to the other side of the Wall, and he and Ghost are finally reunited, to their mutual joy. Jon is chosen as the new Lord Commander of the Night's Watch.[12]

Ghost sleeps on a rug in Jon's new quarters, once those of Donal Noye in the armory.[25] When Jon has a wolf dream, he senses that the direwolf knows that two of his litter-mates have died. Jon dreams Ghost sensing Nymeria sing to the moon with her pack of wolves in the riverlands, and Shaggydog fighting a unicorn on Skagos. Even though Summer is alive, Ghost cannot sense him, and understands this is because Summer is beyond the Wall. When Jon wakes, he realizes that Ghost knows Grey Wind is dead.[25]

Ghost seems to like Melisandre[26] and Val,[27] and the former warns Jon to keep Ghost close.[25][28] Ghost accompanies Jon to the weirwood grove north of the Wall, where they meet Wun Wun and a group of free folk.[29]

Ghost growls at the giant boar later brought by the skinchanger Borroq to Castle Black, so Jon keeps Ghost locked up in his quarters. Queen Selyse Florent also wants Ghost to be penned up, claiming the direwolf scares Princess Shireen Baratheon. An angry Ghost bites at Mully, and sniffs at Bowen Marsh, but Jon attributes his agitation to Borroq's boar, and keeps Ghost within his chambers.[30]

While being stabbed by Bowen Marsh and his cronies in the mutiny at Castle Black, Jon whispers "Ghost" as his last words.[30]

Benjen: A very quiet wolf.
Jon: He's not like the others. He never makes a sound. That's why I named him Ghost. That, and because he's white. The others are all dark, grey or black.[8]

Jon's wolf, the white one, was Ghost. Bran wished he had thought of that first, even though his wolf wasn't white.[31]

The direwolf's red eyes were darker than garnets and wiser than men.[16]

He always slept better with the great white wolf beside him; there was comfort in the smell of him, and welcome warmth in that shaggy pale fur.[21]

The smells are stronger in my wolf dreams, he reflected, and food tastes richer too. Ghost is more alive than I am.[32]

Ghost was the only protection Jon needed; the direwolf could sniff out foes, even those who hid their enmity behind smiles.[27]

Four and one more, the white who has no voice.[2]

—thoughts of Summer, about the then-living direwolves

Even in Winterfell, as a kid before the wolves, Jon was the bastard. He was the odd one out. The rest of them are all brothers and sisters. He's only a half-brother, so he's not as closely tied to them ... So he's of them, he's part of the family, he's part of the siblings, but he's a little bit apart too. Ghost is very similar to that. He's the albino, he's the one who makes no noise, so he's related to the other direwolves but one apart as well.[24]

Once they had been six, five whimpering blind in the snow beside their dead mother, sucking cool milk from her hard dead nipples whilst he crawled off alone. Four remained...[32]