From A Wiki of Ice and Fire
(Redirected from Giant)
Jump to: navigation, search
"Giant" redirects here. Bedwyck, a ranger of the Night's Watch, is nicknamed "Giant" 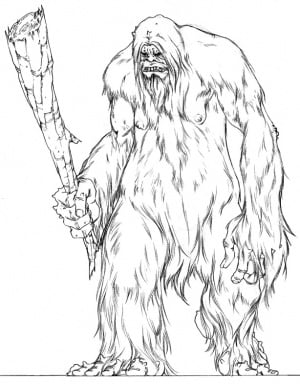 Giants are a race of sentient humanoids which once lived in various regions of the known world but now live only in northern Westeros beyond the Wall. The people of the Seven Kingdoms believe them to be extinct.[1][2]

According to the stories of Old Nan, a servant at Winterfell, giants are outsized men who live in enormous castles, wield large swords, and wear huge boots.[5] Nan told the children of Lord Eddard Stark that wildlings consort with giants and ghouls, [6] and she also told the children about a man who escaped the castle of evil giants only to fall victim to Others.[7] Men believe that giants eat human flesh, and Nan claims that giants mix blood into their porridge and eat bulls whole.[8]

While hostile to men, giants are a shy folk[9] who use little technology. They wield huge clubs that are often no more than logs, though some tie boulders to the end to make crude mauls or use huge stone axes.[4] Giants ride mammoths as steeds[5] and are protective of the animals.[10][11] Giants speak the Old Tongue of the First Men,[12] referring to children of the forest as woh dak nag gran, or squirrel people.[13] Giants do not have kings, but Mag Mar Tun Doh Weg is considered their greatest living warrior.[5] In contrast to stories of bloodthirsty giants, Wun Weg Wun Dar Wun is a vegetarian.[8]

Giants in the north buried their dead, according to Maester Kennet's Passages of the Dead,[2] and some believe a King of the Giants is buried in the Great Barrow instead of the First King.[14] Giants roam freely and reside beneath tall trees or in caverns.[2] Scholars believe giants probably lived in the caverns beneath Casterly Rock, for instance.[15]

Thenns interact more with giants than other free folk tribes,[16] sharing usage of the Old Tongue. Some free folk believe that particularly large men in the north have giant blood, but there have been no recorded incidents of crossbreeding.[3] Some have theorized that the ancient mazemakers of Lorath[17] or the stoneborn of Skagos[18] descend from giants. There is a song about giants sung by free folk, "The Last of the Giants".[5]

House Umber of the Last Hearth depicts a roaring giant in shattered chains in their sigil.[3] The tallest peak in the Mountains of the Moon is known as the Giant's Lance.[19]

Giants once lived in parts of Essos; bones of giants have been found in caves beneath the Hills of Norvos[20] and in the Bone Mountains, for instance.[21] A circle of standing stones in the Velvet Hills is said to have been raised by giants.[22] Giants also may have once lived in Ib.[23]

The Jhogwin, said to be twice as large as the giants of Westeros, once lived in the Realm of Jhogwin in the Krazaaj Zasqa. The last of these massive giants were slain by the Jogos Nhai.[21]

The Mazemakers of Lorath are an extinct race, whose large bones have led some to suggest they were born of the unions of human men and female giants.[17]

Belicho, a triarch of Volantis, was eaten by giants.[24] Yezzan zo Qaggaz, one of the Wise Masters of Yunkai, is said to have once owned a giant in his collection of slave grotesques.[25]

Maesters believe that only giants and children of the forest inhabited Westeros before the arrival of the First Men, although the two species are not believed to have reached the Iron Islands.[26] Maester Herryk's History of the Kings-Beyond-the-Wall includes a free folk song about Gendel and Gorne mediating between a clan of children and a family of giants over a northern cavern.[2] Giants lived in the foothills of the Red Mountains and Massey's Hook,[9] and bones of giants are occasionally found in the westerlands.[27] Giants were not included in the Pact between the First Men and the children.[9]

John the Oak is said to have been fathered by Garth Greenhand on a giantess.[28] In some stories Garth was rejected in his effort to civilize giants, and another of Garth's sons, Brandon of the Bloody Blade, is said to have driven giants from the Reach.[28] The legendary Serwyn of the Mirror Shield saved Princess Daeryssa from giants.[29] Giants and merlings were the friends of the legendary Winged Knight.[30]

The northern legend of the last hero includes his companions encountering ravenous giants.[31] According to legend, Brandon the Builder used the help of giants to build Winterfell[32] and the Wall.[33] Joramun, a King-Beyond-the-Wall and contemporary of Brandon the Breaker, is said to have blown the Horn of Winter and woken giants from the earth.[34] An ancient ballad describes a King of Winter driving giants from the north,[35] and the heads of some giants are said to have ended up on the walls of Winterfell.[36] Lun the Last, King of the Giants, was killed by the Storm King Durran the Dour.[37]

The expedition of Redwyn from the Shadow Tower to Lorn Point fought giants during the reign of Dorren Stark, King in the North.[38] Lord Walton Stark was killed by giants in the haunted forest while pursuing Ser Raymund Mallery's rebels.[39] According to tales told by King Viserys I Targaryen to his grandchildren, King Jaehaerys I Targaryen once defeated a wildling host including giants, mammoths, and wargs north of the Wall.[40][41] The last reports of giants in Westeros are more than a century old.[2]

Songs of the free folk tell that giants were at one time more plentiful, but they were hunted by men and driven from their stone halls. Now unable to withstand the Others,[42] the several hundred remaining giants have joined the host of Mance Rayder King-Beyond-the-Wall.[5] The Lord of Bones, a leader of the free folk, wears the broken skull of a giant as his helm.[43] Tormund Giantsbane is said to have slain a giant.[5]

Osha suggest to Bran Stark that the large stableboy Hodor has giant's blood, mentioning that her brother once killed a ten-foot-tall giant.[3] She later explains that giants, children of the forest, and other old races fled beyond the Wall.[44]

Following the Battle of Oxcross, some House Lannister men attribute Robb Stark's success to the aid of giants.[45]

Lark tells Chett that giants and wargs are in the Frostfangs.[46] 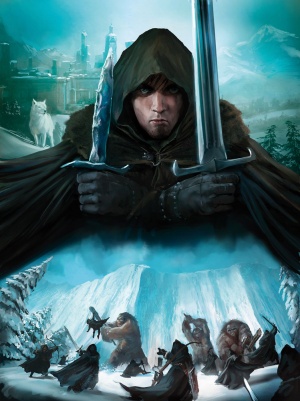 Jon Snow sees hundred of giants in the rearguard of the host of Mance Rayder, King-Beyond-the-Wall, near the Milkwater.[5] Tormund tells Jon that his nickname of Giantsbane is inaccurate, and he instead claims to have been nursed by an unknowing giantess.[5] Tormund, Ryk, and Ygritte sing "The Last of the Giants" to Jon.[5]

During the battle beneath the Wall, giants use a sharpened tree as a ram. The men of the Night's Watch use arrows, barrels of burning oil,[4] and stones against them.[42] Donal Noye and Mag Mar Tun Doh Weg slay each other in the tunnel through the Wall.[4] Tormund tells Jon that a dozen giants were killed in the fighting.[42] Giants atop mammoths initially withstand the attack of King Stannis Baratheon's knights,[42] but some surrender along with Mance. Stannis is willing to allow giants to live in the Gift south of the Wall, as long as they kneel to the Lord of the Seven Kingdoms and worship R'hllor.[47]

Arya Stark overhears that the ghost of High Heart dreamt of a man slaying a savage giant in a castle made of snow.[48]

Ser Godry Farring is known as Godry the Giantslayer for having killed a small giant in the battle beneath the Wall.[49] Jon Snow, now Lord Commander of the Night's Watch, encounters Wun Weg Wun Dar Wun with a group of wildlings in a grove north of the Wall, but Leathers convinces them to avoid fighting.[8] Passing through the Wall, Wun Wun learns some words of the Common Tongue from Leathers, and the giant impresses Princess Shireen Baratheon. Wun Wun is fascinated with the fool Patchface.[50]

Bran notices skulls of giants in the cave of the three-eyed crow.[13] The boy learns from Leaf, one of the children of the forest, that giants are nearly extinct.[13]

Long before the coming of the First Men, all Westeros belonged to the elder races—the children of the forest and the giants (and, some say, the Others, the terrifying "white walkers" of the Long Night).[52]}

Osha: Now there's a big man. He has giant's blood in him, or I'm the queen.


Bran: Maester Luwin says there are no more giants. He says they're all dead, like the children of the forest. All that's left of them are old bones in the earth that men turn up with plows from time to time.


Osha: Let Maester Luwin ride beyond the Wall. He'll find giants then, or they'll find him.[3]
—Bran Stark and Osha

Perhaps magic was once a mighty force in the world, but no longer. What little remains is no more than the wisp of smoke that lingers in the air after a great fire has burned out, and even that is fading. Valyria was the last ember, and Valyria is gone. The dragons are no more, the giants are dead, the children of the forest forgotten with all their lore.[53]

Noye and his men had been waiting within, behind a gate of heavy iron bars like the two Pyp had just unlocked. The two crossbows had gotten off a dozen quarrels as the giant struggled toward them. Then the spearmen must have come to the fore, stabbing through the bars. Still the giant found the strength to reach through, twist the head off Spotted Pate, seize the iron gate, and wrench the bars apart. Links of broken chain lay strewn across the floor. One giant. All this was the work of one giant.[4]

The giants are almost gone as well, they who were our bane and our brothers.[54]

Shireen: He's a giant! A real true giant, like from the stories. But why does he talk so funny?
Jon: He only knows a few words of the Common Tongue as yet. In their own land, giants speak the Old Tongue.[50]