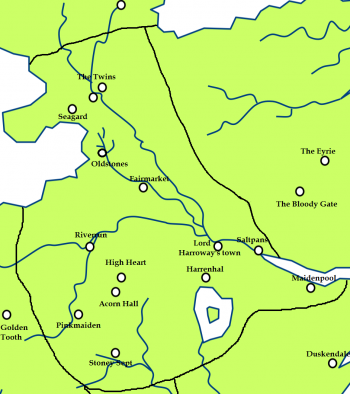 Gods Eye
The riverlands and the location of the Gods Eye 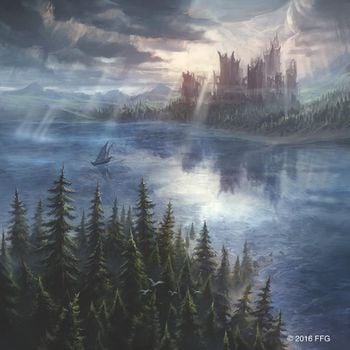 The Gods Eye, with Harrenhal on its shore. By Sergey Glushakov © FFG

The Gods Eye, the largest lake of the Seven Kingdoms, is located south of the Trident and west of the kingsroad in the southern riverlands. The Isle of Faces, by Kaija Rudkiewicz © Fantasy Flight Games

When warm, the water of the Gods Eye is blue and green[1] and glimmers in sunlight,[2][1] but during winter its pewter waters resemble cold steel.[3] Among the lake's feeder streams is the Rippledown Rill.[4] The Gods Eye is said to have odd currents and hungry fish.[5]

The great castle of Harrenhal and its town, Harrentown, sit astride the Gods Eye's northern shore, while an unnamed town is along the southern shore.[1] At its center is a lone island, the Isle of Faces, which was where the Pact between the children of the forest and the First Men was created. Rivermen occasionally sail across the Gods Eye to the Isle of Faces, but they are always driven away by winds or by flocks of ravens.[6]

Black swans live in the vicinity,[7] and there is a lake road near Harrenhal.[8] The landscape near the great castle is a patchwork of rolling hills, meandering streams, sunlit fields, and holdfasts, while further south it is forested.[9]

The Gods Eye feeds an unnamed river that flows south to the Blackwater Rush.[10][11] The holdfast of Briarwhite is south of the lake and east of the river.[12]

The Pact between the First Men and the children of the forest was signed on the Isle of Faces in the middle of the Gods Eye,[13] and the order of the green men was formed to protect the weirwoods on the island.[6]

Singers and storytellers tell the tale of the Green King of the Gods Eye.[14]

The Andals were unable to conquer the Isle of Faces.[15] 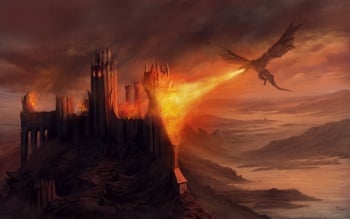 The burning of Harrenhal, by Rene Aigner ©

Harren Hoare, King of the Isles and the Rivers, constructed Harrenhal on the northern shore of the Gods Eye. During Aegon's Conquest, the Battle of the Reeds and the Wailing Willows were fought along the southern shore of the lake. Two sons of Harren the Black were slain by Balerion on the lake while returning in their longboats to Harrenhal. King Aegon I Targaryen conquered the region through the burning of Harrenhal.[16] Aegon then marched from his camp besides the Gods Eye to face the Two Kings.[17]

Bernarr Brune slew the rebel Harren the Red in a village west of the Gods Eye.[18] Prince Aegon Targaryen, the son and heir to King Aenys I Targaryen, was slain by King Maegor I Targaryen in the Battle Beneath the Gods Eye in 43 AC.[19]

During the Dance of the Dragons, the Battle by the Lakeshore was fought along the western shore of the Gods Eye, while the Butcher's Ball occurred south of the lake.[5] Princes Aemond and Daemon Targaryen and their dragons, Vhagar and Caraxes, fought to their mutual deaths in the Battle Above the Gods Eye.[5] Ser Addam Velaryon flew above the lake on Seasmoke to visit the Isle of Faces.[20] Aemond's body was found years later with Dark Sister in his eye socket, although Daemon's remains were never found.[5]

Whitewalls was constructed by House Butterwell near the Gods Eye.[21] During the reign of Aerys I Targaryen, there was an old timbered inn with turrets along the lake, and Ser Duncan the Tall and Prince Aegon Targaren used Ned's nearby ferry to cross to the wedding tourney at Whitewalls. In the aftermath of the Second Blackfyre Rebellion, Whitewalls was destroyed.[2]

Lord Walter Whent's great tourney at Harrenhal was hosted along the northern shore of the lake.[22] 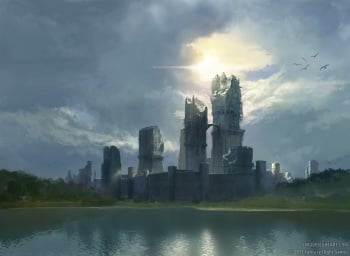 Harrenhal on the northern shore of the Gods Eye, by Lino Drieghe © Fantasy Flight Games

Wolf packs are reportedly bolder than ever near the Gods Eye.[23]

Yoren brings his recruits for the Night's Watch, including a disguised Arya Stark, to an abandoned town on the southern shore of the Gods Eye. They are set upon by westermen led by Ser Amory Lorch, however, and only a few survive.[1]

Trying to avoid men-at-arms, Arya observes that all settlements they pass, whether villages or castles, have been burned by the Lannisters.[7] She and Gendry are eventually captured by the Mountain's men at a village by the Gods Eye[7][24] and taken to Harrenhal.[9]

Arya learns that Lord Beric Dondarrion was hanged by Amory at Rushing Falls near the Gods Eye.[24][25]

Meera Reed tells Bran Stark the story of the Knight of the Laughing Tree, which includes a crannogman who traveled to the Isle of Faces within the Gods Eye.[26]

When leaving Harrenhal, Ser Jaime Lannister takes the lake road to avoid a segment of the busier kingsroad.[8]

Jaime returns to Harrenhal while pacifying the riverlands. When the Mountain's men present him with the head of Vargo Hoat, Jaime has Josmyn Peckledon throw it in the lake.[3]

The sun was low in the west by the time they saw the lake, its waters glimmering red and gold, bright as a sheet of beaten copper.[2]

The riverlands are awash in blood and flame all around the Gods Eye.[27]

The setting sun made the tranquil surface of the water shimmer like a sheet of beaten copper. It was the biggest lake she had ever seen, with no hint of a far shore.[1]

Gods Eye was a sheet of sun-hammered blue that filled half the world.[7]