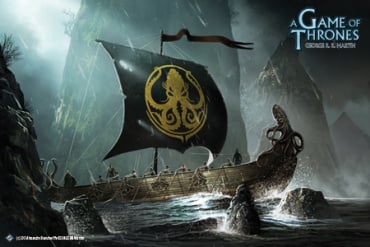 The Golden Storm was a longship captained by Aeron Greyjoy during Greyjoy's Rebellion. It was sunk during the sea battle off Fair Isle.

The Golden Storm was Aeron Greyjoy's newly-made longship. Aeron, who in his early years was a jolly drunk, claimed the Drowned God gifted him with the ability to piss longer or farther than any man. Upon receiving his longship, he wagered it against a herd of goats that he would be able to put out a hearthfire by pissing on it. Aeron won the bet giving the ship its name the Golden Storm, though his brother Balon, Lord of the Iron Islands, threatened to hang him from her mast when he heard what sort of ram his brother intended to mount upon her prow to serve as graphic monument to Aeron's accomplishment.[1]

During Greyjoy's Rebellion Aeron sailed with his brother Victarion, Lord Captain of the Iron Fleet, against Stannis Baratheon, the master of ships for King Robert I Baratheon. When Stannis trapped the Iron Fleet in the sea battle off Fair Isle, the Golden Storm was sunk by Stannis's great warship, Fury, and Aeron was captured by House Lannister.[1]