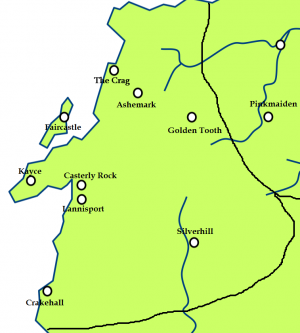 Golden Tooth
The westerlands and the location of the Golden tooth

The Golden Tooth, also called the Tooth,[1] is the seat of House Lefford in the westerlands. It is located along the river road and is east of Ashemark and Sarsfield, west of Riverrun and Pinkmaiden, and north of Hornvale.[2]

Although the Golden Tooth is a small castle,[3] it is a strong keep commanding the hill road between the westerlands and the riverlands.[1] It is generally held that in order to attack the westerlands from the east, one must take the Tooth to have a secure passage.[4] 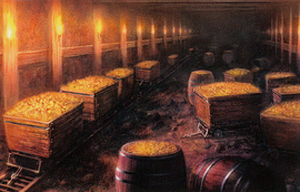 The Golden Tooth is the seat of the Leffords, a family formed by the union of First Men and Andals.[5] Cerion Lannister, a King of the Rock, conquered the hilly vicinity of the Tooth by defeating three petty kings.[5] The gold from the Tooth helped establish House Lannister as one of the richest houses in Westeros.[6]

Ser Joffrey Doggett controlled much of the land north of the Golden Tooth during the Faith Militant uprising.[7] Rhaena Targaryen and her dragon, Dreamfyre, briefly stayed at the Golden Tooth with the Leffords in 51 AC.[8] King Jaehaerys I Targaryen visited the castle in 55 AC.[9]

During the First Blackfyre Rebellion, the supporters of Daemon I Blackfyre won victories at Lannisport and the Golden Tooth.[10]

Ser Edmure Tully sends Lords Piper and Vance to prevent any Lannister army from entering the riverlands from the Golden Tooth.[11] A force under the command of Ser Jaime Lannister breaks them in a battle in the hills below the Golden Tooth, however.[12] After their own defeat in the Battle of the Camps, Ser Forley Prester leads the remnants of Jaime's host back to the Golden Tooth.[13]

During the War of the Five Kings, an army under the command of Robb Stark, King in the North, circumvents the Golden Tooth and the passage it blocks by using a narrow goat path found by his direwolf, Grey Wind. Robb descends upon Ser Stafford Lannister's host, annihilating them at Oxcross, three days ride from Lannisport,[4] and the king then raids the westerlands.[1] Oxcross shocks King Joffrey I Baratheon's court in King's Landing, since the Tooth remains in Lannister control.[4]

In return for the release of Robett Glover from Duskendale, Robb tasks Ser Rolph Spicer with bringing Martyn Lannister to the Golden Tooth.[14]

Following the Red Wedding, Ser Daven Lannister and Forley march from the Golden Tooth toward Riverrun.[15]

After Jaime resolves the siege of Riverrun, Forley commands the escort bringing Edmure to Casterly Rock. Jaime worries the group will be attacked by the outlaws of Lord Beric Dondarrion before they reach the Golden Tooth.[16] 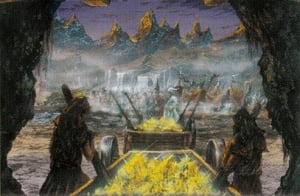 Perwyn: How did the king ever take the Tooth? That's a hard strong keep, and it commands the hill road.
Martyn: He never took it. He slipped around it in the night. It's said the direwolf showed him the way, that Grey Wind of his. The beast sniffed out a goat track that wound down a defile and up along beneath a ridge, a crooked and stony way, yet wide enough for men riding single file. The Lannisters in their watchtowers got not so much a glimpse of them.[17]