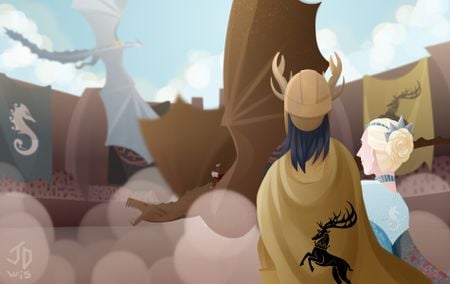 King Jaehaerys I and Princess Alysanne Targaryen, on their dragons Vermithor and Silverwing, arrive at the Golden Wedding. Art by Jaydeewis ©

The Golden Wedding was the elaborate wedding on the seventh day of the seventh moon in 49 AC of Dowager Queen Alyssa Velaryon, the mother and regent of King Jaehaerys I Targaryen, and Rogar Baratheon, Lord of Storm's End and Hand of the King.[1]

Alyssa Velaryon, the queen consort of King Aenys I Targaryen, was widowed after the death of her husband in 42 AC. Their son, Jaehaerys I Targaryen, became king in 48 AC. Meanwhile, Lord Rogar Baratheon of Storm's End had been a widower since the death of his young wife. Jaehaerys was privately opposed to Rogar marrying his mother without asking for royal permission. The king did not publicly reject to the marriage, however, as Jaehaerys had not opposed the recent marriage of his sister, the widowed Queen Rhaena, to Androw Farman.[1]

Lords and knights from throughout the Seven Kingdoms, as well as envoys from Dorne and the Free Cities, came to King's Landing for the lavish wedding. Many nobles used the wedding as an opportunity to meet the new king, who sat the Iron Throne after King Maegor I Targaryen. Rogar entertained guests with drinking, feasting, gambling, hawking, and hunting. According to an unconfirmed tale spread by smallfolk, Rogar and his kin celebrated with seven maidens and twoscore other women from Lysene pleasure housess. Princess Alysanne Targaryen hosted with grace the noblewomen who came for the wedding.[1]

The ceremony occurred on the seventh day of the seventh month of 49 AC, and at least forty thousand smallfolk are said to have gathered in the partially-constructed Dragonpit at the Hill of Rhaenys. Rogar wore gold and an antlered halfhelm, while Alyssa wore a gemstone-covered greatcloak. Jaehaerys and Alysanne impressed the crowd by arriving on their dragons, Vermithor and Silverwing. After the High Septon performed the marriage rites inside the Dragonpit, the wedding party proceeded to the Red Keep. The most prestigious attendees feasted in the throne room, while lesser nobles gathered in yards and small halls.[1]

The wedding was followed by seven days of feasting and tourneys, including the famous War for the White Cloaks. A mock sea battle was also staged in Blackwater Bay. The Golden Wedding delighted the realm, for Jaehaerys was seen as a promising young ruler and Rogar as a generous Hand. The smallfolk and merchants of King's Landing also profited greatly from the visitors.[1] Rogar's indulgent behavior before the wedding was remembered by the cautious Jaehaerys, however, and the two had a falling out after the king chose to marry Alysanne.[2]

From the Vale of Arryn

Never has there been such a glory in all the annals of Westeros.[1]