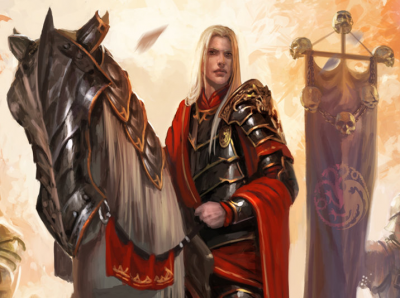 Golden skulls are the gold-dipped skulls of the deceased captains-general of the Golden Company. The tent of the current captain-general is made of cloth-of-gold and is surrounded by a ring of pikes topped with these gilded skulls.[1] The battle standards of the company depict the famous skulls golden in color.[2]

On his deathbed Ser Aegor Rivers famously commanded his men to boil the flesh from his skull, dip it in gold, and carry it before them when they crossed the narrow sea to retake Westeros. Each of his successors as captain-general has followed this example; upon their deaths their golden skulls adorn the standard poles of the Golden Company.[1]

When Jon Connington arrives at the Golden Company's encampment near Volon Therys he contemplates the golden skulls. One is larger than the rest – Maelys the Monstrous and his nameless brother. The other skulls have a sameness to them, though several are cracked and splintered by the blows that slew them, and one has filed pointed teeth.[1]

When Jon looks at the skull of his old friend, Myles Toyne, he sees that death has robbed Myles of his ears, his nose, and all his warmth. Only his smile remains, transformed into a glittering grin. Jon thinks all the skulls are grinning, even Bittersteel's on the tall pike in the center.[1]

During the landing of the Golden Company, the sellswords hide their skulls and golden battle standards to sow confusion in the stormlands.[2]

Blackheart. Myles Toyne had been so full of life the last time Griff had left him, it was hard to accept that he was gone. A golden skull atop a pole.[1]

When I return to Westeros, it will not be as a skull atop a pole.[1]