Greenblood
Dorne and the location of the Greenblood

The Greenblood is a river in southern Dorne. It takes its name from its murky green waters which are slow-moving and shallow.[1] 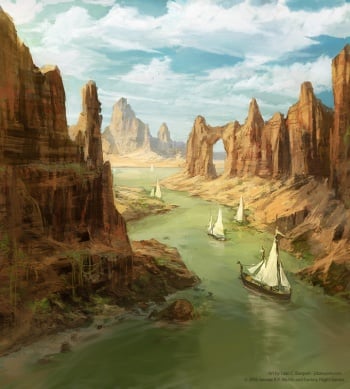 The Greenblood, formed by the confluence of the Vaith and the Scourge near Godsgrace, flows east to the Summer Sea. The Planky Town lies at the Greenblood's mouth on the sea. Lemonwood is located on the coast near the southern shore of the river.[2]

The orphans of the Greenblood live on painted rafts along the river.[1] Farms and orchards are located along the Greenblood for hundreds of leagues.[3] Landscape near the river can include devilgrass, olive groves, and lemon orchards watered by old canals.[1] Whiskerfish are found in the river.[4]

Most of the First Men who settled in Dorne after crossing the Arm of Dorne settled along the banks of the Greenblood, digging ditches and canals.[3] A dozen houses of the Greenblood—including Houses Briar, Brook, Brownhill, Holt, Lake, Shell, and Wade—chose a High King of Dorne from amongst their number. Three of the houses were destroyed after a generation of warfare following a disputed election, however.[5] The remaining houses were conquered during the coming of the Andals, with the Shells and Wades defeated by House Martell.[6]

House Yronwood's dominion once reached from the Red Mountains to the headwaters of the Greenblood.[5] The Yronwoods submitted to the Martells during Nymeria's War, however.[7]

Rhaenys Targaryen flew Meraxes over the Greenblood and the Planky Town when she traveled to Sunspear to treat with Meria Martell during Aegon's Conquest.[8] Rhaenys burned the Planky Town at the start of the First Dornish War in 4 AC, choking the mouth of the river. She then took Lemonwood, Spottswood, and Stinkwater.[9] In reaction to the Defenestration of Sunspear, Lord Harlen Tyrell planned to march from the Hellholt to Vaith and then follow the rivers to Sunspear. His army disappeared in the deep sands of Dorne, however.[9]

During the conquest of Dorne, Lord Alyn Velaryon broke the Planky Town and sailed up the Greenblood.[10] Alyn Oakenfist returned again in 160 AC.[11]

Ser Duncan the Tall and Prince Aegon Targaryen took a poleboat down the Greenblood to the Planky Town when they visited Dorne.[12]

The orphans of the Greenblood spread the game of cyvasse up and down the river.[13] 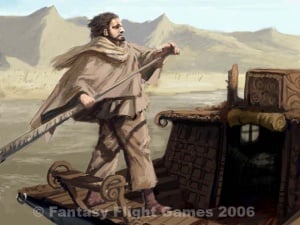 An orphan of the Greenblood by Jonathan Standing © Fantasy Flight Games

Ser Gascoyne of the Greenblood is the sworn shield of Prince Trystane Martell.[13]

Obara Sand claims that people along the Greenblood are outraged at the death of her father, Prince Oberyn Martell.[14]

After gathering her conspirators to Shandystone, Princess Arianne Martell plans to meet orphans of the Greenblood along the river. Once they reach the Greenblood, however, Arianne realizes her plot to crown Myrcella Baratheon has been betrayed. Ser Arys Oakheart is decapitated by Areo Hotah, with his head splashing into the river.[1]

Whiskerfish from the Greenblood is served during the feast welcoming Ser Balon Swann to Sunspear.[4]

Arianne Martell had crossed the Mander once, when she had gone with three of the Sand Snakes to visit Tyene's mother. Compared to that mighty waterway, the Greenblood was scarce worthy of the name of river, yet it remained the life of Dorne. It took its name from the murky green of its sluggish waters; but as they approached, the sunlight seemed to turn those waters gold. She had seldom seen a sweeter sight.[1]