From A Wiki of Ice and Fire
(Redirected from Greenseers)
Jump to: navigation, search 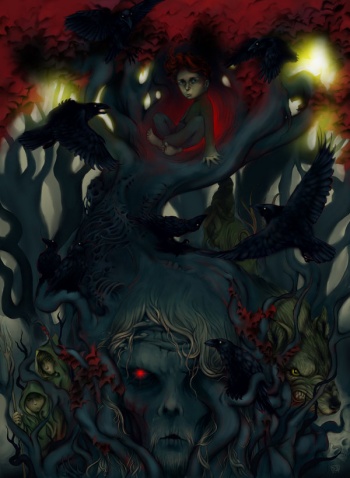 Bran Stark being mentored by the last greenseer – by Urukki Saki ©

Greenseers were the wise men and leaders of the children of the forest who had magical abilities, including power over nature and greensight.[1]

Greenseers had the greensight and were wargs as well.[2] The First Men believed that they were responsible for carving faces into weirwoods, creating heart trees.[3] Stories describe the greenseers seeing through the faces of their weirwoods, influencing animal and plant life,[4] and possibly seeing into the past and future. Maesters are skeptical of some feats of the greenseers.[1]

During the war of the First Men and the children of the forest, greenseers are said to have turned trees into warriors[5] and sent beasts against humans.[6] As the tales go, they used the hammer of the waters to shatter the Arm of Dorne into the Broken Arm and the Stepstones, but the First Men continued to settle throughout Westeros.[3] The Neck was also flooded by their magic.[4] The greenseers and wood dancers of the children agreed upon the Pact with the First Men at the Isle of Faces.[3]

The Starks of Winterfell slew the greenseers allied with the Warg King at Sea Dragon Point.[7] During the Andal invasion, Erreg the Kinslayer is said to have defeated greenseers at High Heart, although True History insists that the children had already left the riverlands before the Andals arrived.[8] Gwayne IV Gardener, King of the Reach, sought assistance from greenseers in anticipation of Andal attacks.[9]

The relationship between the greenseers of the children of the forest and the order of the green men who protect the Isle of Faces in the Gods Eye is unknown.

In Winterfell Maester Luwin discusses greenseers and the war of the First Men and the children of the forest with Bran Stark.[3]

Luwin discusses greensight and the visions of Jojen Reed with Bran.[4]

The three-eyed crow, the last greenseer,[11] lives with children of the forest in far north of the Wall. Bran Stark and his companions go in search of him, embarking on a perilous journey Beyond the Wall. They are led by Coldhands to the cave of the three-eyed crow.[12] The last greenseer and Leaf have Bran consume weirwood paste to help awaken his gifts and learn from the trees.[10]

The children are gone from the world, and their wisdom with them. It had to do with the faces in the trees, we think. The First Men believed that the greenseers could see through the eyes of the weirwoods. That was why they cut down the trees whenever they warred upon the children. Supposedly the greenseers also had the power over the beasts of the wood and the birds in the trees. Even fish.[4]

Bran: You're a greenseer.
Jojen: No, only a boy who dreams. The greenseers were more than that. They were wargs as well, as you are, and the greatest of them could wear the skins of any beast that flies or swims or crawls, and could look through the eyes of the weirwoods as well, and see the truth that lies beneath the world.[2]

A thousand eyes, a hundred skins, wisdom deep as the roots of ancient trees. Greenseers.[10]

—the three-eyed crow to Bran Stark