Grey Wind is a direwolf bonded to Robb Stark. He is the litter-mate of Lady, Nymeria, Summer, Shaggydog, and Ghost.

Grey Wind has smoke grey fur and yellow eyes.[1] He is a lean direwolf.[2] 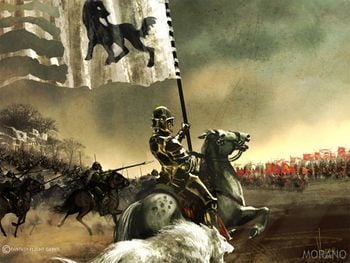 Grey Wind is discovered along with his litter mates by Robb Stark and Jon Snow after the direwolves' mother has been killed by a stag.[3] Like the other Stark direwolves, Grey Wind forms a special bond with his master. Like Robb, Grey Wind grows bold and faithful. Robb names him Grey Wind due to his fast speed when running.[4] During Tyrion Lannister's return to Winterfell, Rickon Stark arrives with the direwolves Summer, Grey Wind, and Shaggydog in tow. When they catch the scent of Tyrion, all three direwolves move in to corner him and Tyrion is only saved when the Starks call off their wolves.[5]

During Bran Stark's first ride on a horse since his fall, Robb, Grey Wind, and Summer go off in search of deer, leaving Bran alone. A small party of wildlings come upon Bran and promptly try to rob him. Robb, Grey Wind, and Summer return and a fight ensues. Grey Wind kills Wallen and then runs down another of the wildlings. All of the wildlings are killed except for Osha, who surrenders and is taken captive for further questioning.[6]

Grey Wind follows Robb around Winterfell and sits at his feet when he holds court. When Greatjon Umber menaces Robb during an audience, Grey Wind bites two of the lord's fingers off, helping Robb gain the respect of Umber and other Stark bannermen. During the War of the Five Kings, Grey Wind follows Robb into battle and adds significantly to Robb's fearsome reputation. At the battle in the Whispering Wood, Grey Wind kills several men.[1] 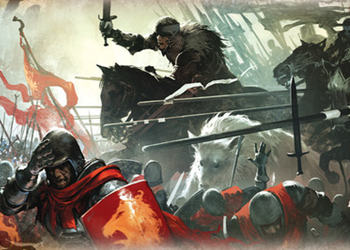 Grey Wind is present at Riverrun when Robb gives peace terms for Ser Cleos Frey, who is visibly scared.[1]

Robb's cavalry slip past the Golden Tooth into the westerlands using a secret goat track that Grey Wind discovers.[7] At the Battle of Oxcross Robb sets Grey Wind on the Lannisters' horses after Ser Brynden Tully's scouts cut the horse lines, causing a stampede and a crushing rout of Ser Stafford Lannister's host.[8] The direwolf kills six or seven men[9] and rumors circulate that Robb fed Stafford's heart to Grey Wind after the battle.[7]

Grey Wind goes into battle several more times beside Robb, killing a man at both Ashemark and the Crag.[9] He does not like the smell of Ser Rolph or Lady Sybell Spicer, which leads Robb's mother, Lady Catelyn Stark, to urge Robb to send Rolph away. However, the fear and disquiet that Sybell and her children show toward Grey Wind leads Robb to send Grey Wind away from him more often than not. Robb had believed the direwolves were guardians, but he loses faith in the idea after hearing that Bran and Rickon were killed by Theon Greyjoy at Winterfell.[9]

Catelyn hears Grey Wind howling after Riverrun learns of the deaths of Willem Lannister and Tion Frey.[10] Robb often scouts with Grey Wind during the journey from Riverrun to the Twins for the wedding of Lord Edmure Tully to Roslin Frey. At Oldstones the direwolf leaps upon the tomb of King Tristifer IV Mudd.[2] 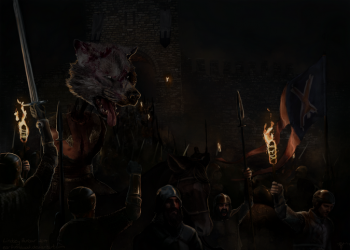 Arriving at the Twins, Grey Wind growls at Ser Ryman, Ser Edwyn, Black Walder, and Petyr Frey, and Petyr Pimple falls from his scared horse. Grey Wind balks at the gatehouse, so Robb has Ser Raynald Westerling keep the direwolf outside of the hall.[11] Catelyn urges Robb to trust Grey Wind's instincts, but Robb has him tethered in the stables during Edmure's wedding, since Lord Walder Frey bans the direwolf from his hall.[12] While the butchery of the Stark forces takes place in the Red Wedding, Frey men kill Grey Wind, but not before he is released by Raynald, allegedly killing four Frey wolfhounds and tearing the arm off the kennelmaster, even while being shot by crossbows.[13] Grey Wind's head is sewn onto Robb's decapitated corpse with Robb's crown nailed atop his head as a final insult to the Starks.[14]

Bran and Summer have a dream that something has happened to Robb and Grey Wind, but Bran does not speak of it to anyone, and tries to forget it.[15]

While defending the Wall, Jon Snow has a dream and sees a ghastly grey direwolf spotted with blood, staring back at him with sad golden eyes. He mistakenly thinks of Summer, unaware of Robb's and Grey Wind's deaths.[16]

Grey Wind's defender, Raynald, is presumed dead after falling into the Green Fork.[17]

Jon Snow's direwolf, Ghost, is aware that his littermate Grey Wind is dead,[18] while Bran Stark fears the same.[19]

I saw Lord Umber's giant-in chains and the Mallister eagle, but it was the boy who led them, with a monstrous wolf running at his side. I wasn't there to see, but it's said the beast killed four men and ripped apart a dozen horses.[20]

A hall is no place for a wolf. He gets restless, you've seen. Growling and snapping. I should never have taken him into battle with me. He's killed too many men to fear them now. Jeyne's anxious around him, and he terrifies her mother.[9]

Any man Grey Wind mislikes is a man I do not want close to you. These wolves are more than wolves, Robb. You must know that. I think perhaps the gods sent them to us. Your father's gods, the old gods of the north.[9]

—Catelyn Stark to Robb Stark, upon learning that Grey Wind does not like Rolph Spicer

A silence fell across the torchlit hall, and in the quiet Catelyn could hear Grey Wind howling half a castle away. He smells the blood, she thought, through stone walls and wooden doors, through night and rain, he still knows the scent of death and ruin.[10]

He's a direwolf, not a dog, and dangerous to men he does not trust.[11]

Walder: Your wild beast has a taste for human flesh, I hear, heh. Rips out throats, yes. I'll have no such creature at my Roslin's feast, amongst women and little ones, all my sweet innocents.
Robb: Grey Wind is no danger to them, my lord. Not so long as I am there.[12]