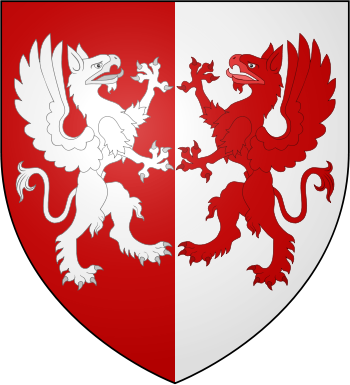 Griffins are terrifying[1] and possibly mythical creatures of the Known World. Griffins from real-world legends are majestic creatures with lion and eagle features.

According to legends from the Vale of Arryn, the Winged Knight defeated the Griffin King atop the Giant's Lance.[2]

Stone sentries outside of the shop of Tobho Mott in King's Landing are decorated as griffin and unicorn knights.[3] There are also plundered griffins at Vaes Dothrak.[4] Qarth contains fountains in the shapes of griffins, dragons, and manticores.[5] Among the grotesques and gargoyles of Dragonstone are griffins.[6]

House Connington of Griffin's Roost has dancing griffins on their sigil,[7] and their leaders sit the gilded Griffin Seat.[8] The family's battle cry is "A griffin! A griffin!"[8] According to the tale of the Knight of the Laughing Tree, the lord of griffins was present for the great tourney.[9] Ser Alyn Connington of the Kingsguard was known as the Pale Griffin.[10]

During the tourney on King Joffrey's name day, Ser Horas Redwyne defeats an older knight whose steed is decorated with silver griffins against a striped blue-and-white field.[11]