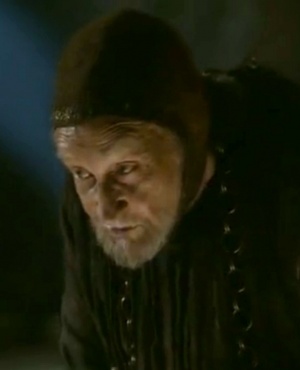 Roy Dotrice as Wisdom Hallyne in Game of Thrones

Hallyne, also known as Hallyne the Pyromancer, is the head of the Alchemists' Guild. He is a third generation alchemist.[1] He was trained by Wisdom Pollitor.[2] In the television adaptation Game of Thrones he is portrayed by Roy Dotrice.

Hallyne is a pallid man with soft damp hands.[1]

Hallyne's family has been involved in the Alchemists' Guild for three generations. His father was wisdom in the days of King Aerys II Targaryen and his grandfather in those of Jaehaerys II.[2]

Hallyne was an acolyte during the reign of Aerys II.[2] He was likely unaware of the wildfire plot being planned by Rossart and the other Wisdoms, as according to Jaime Lannister the alchemists did all the work in secret and did not trust their own apprentices with the knowledge.[3]

Hallyne is part of Queen Regent Cersei Lannister's retinue when the queen does a circuit of the walls of King's Landing.[4] He later guides Tyrion Lannister through the Guildhall of the Alchemists, explaining wildfire and the role of the Alchemists's Guild to him.[1] During the preparations for the Battle of the Blackwater, Hallyne reports to Tyrion that the pyromancers have several thousands of jars of wildfire more prepared than expected, claiming that it partially is because of the discovery of a lost cache of Lord Rossart underneath the Dragonpit, and partialy because the secret spells used to make the wildfire are working better than they had been doing before.[2] He wonders aloud to Tyrion whether there are any dragons again, to explain for the improved efficiency of the spells.[2]

For services rendered during the Battle of the Blackwater, Hallyne is raised to a lordship, although no lands or incomes are given along with the title.[5]

After the funeral for Lord Tywin Lannister, Lord Hallyne promises Cersei Lannister to put a flaming hand in the sky above King's Landing.[6] He and the other alchemists burn down the Tower of the Hand with wildfire under orders from Cersei after the wedding celebration of King Tommen I Baratheon and Margaery Tyrell.[7]

Cersei considers Lord Hallyne as a candidate for the office of Hand of the King. Jaime Lannister tells her that Hallyne would be a terrible choice.[8]

After Dragonstone has been captured by the Iron Throne, Hallyne presents himself to Cersei to ask her if the pyromancers might be allowed to hatch any dragon's eggs that might be found upon Dragonstone.[9]

Wildfire is but one of the dread secrets of our ancient order.[1]

The substance flows through my veins, and lives in the heart of every pyromancer. We respect its power.[1]