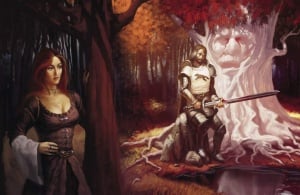 A heart tree is a tree with a carved face that followers of the old gods pray, often within a godswood.[1] It is often said that no man can tell a lie in front of a heart tree, as the old gods know when men are lying.[2] Heart trees are almost always weirwoods, but other types of trees are used if weirwoods are not available. For instance, the heart tree of the Red Keep's godswood in King's Landing is a great oak.[3] 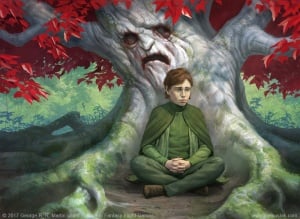 After Ice Eyes retook the Wolf's Den from slavers from the Stepstones, the freed slaves were said to have hung the entrails of the slavers from a heart tree.[4]

The Knight of the Laughing Tree carried a shield depicting a weirwood heart tree with a laughing face.[5]

After seizing Storm's End from Ser Cortnay Penrose, Melisandre has Stannis Baratheon burn the castle's godswood, including the heart tree, as an offering to the Lord of the Light.[6][7]

The heart tree had always frightened him; trees ought not have eyes, Bran thought, or leaves that looked like hands.[8]

Northmen, they were. Savages who worship trees.[9]