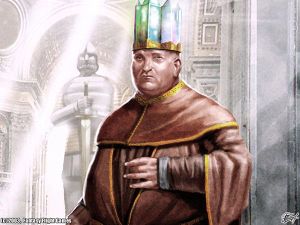 The High Septon in his crystal crown - by Amoka©

The High Septon and the Most Devout convene in the Great Sept of Baelor in King's Landing, a vast building of white marble with seven crystal towers. Prior to being stationed in King's Landing, and before the arrival of the Targaryens, the seat of the Faith was the ornate Starry Sept in Oldtown, which was constructed of black marble with stained glass windows set in pointed arches.

The High Septon was not especially "beholden" to the Targaryens and was often a dangerous rival to them, until the reign of Maegor the Cruel.[1]

The selection of a new High Septon is traditionally in the hands of the Most Devout but the will of past Targaryen kings has sometimes influenced their choice. This was most notable during the reign of Baelor the Blessed, who had a stoneworker and later an eight-year old boy chosen for the office.

A new High Septon extends the practice of septons giving up their family names by renouncing any kind of individual name. This is due to the belief that the individual becoming High Septon is no longer a man but an avatar of the gods. This leads to trouble distinguishing between various past holders of the office, as one can only refer to them by descriptions such as "the stonemason one" or "the fat one" or the "one before the fat one." High Septons usually wear a great crown made of crystal and gold while performing their duties. According to Cersei Lannister, it is possible to winkle out the birth names of High Septons but they do not appreciate it if you use them.[2]

The High Septon, known as the fat one, is a grossly fat man who has been High Septon for many years. He is regarded by many lords and smallfolk as corrupt.[3]

The fat High Septon is killed in the riot of King's Landing.[4] His crystal crown is destroyed by thieves.

The new High Septon, who was selected by Tyrion Lannister,[3] weds King Joffrey I Baratheon to Margaery Tyrell and wears a grander crystal crown gifted by Lord Tywin Lannister.[5]

Tyrion's High Septon is regarded as a weak willed but good man. He prayed with Ser Lancel Lannister when he was injured and near death. Lancel confesses his sins to him, such as bedding Queen Cersei Lannister and giving King Robert I Baratheon a more potent wine than he was used to which resulted in his death. The High Septon said he must forgive her though. Cersei, paranoid about what Lancel may have told him, orders the High Septon's death. Osney Kettleblack sneaks into the Great Sept of Baelor and suffocates the man with a pillow while he sleeps.[6]

The next High Septon is imposed on the Most Devout by the "sparrows" who turn up as refugees from the War of the Five Kings. He's dubbed the High Sparrow[6][2] The Faith Militant is reinstated during his term when Queen Cersei wants the crown's debt to the Faith settled.

A devout and holy man with an iron will, the High Sparrow has much of the Faith's riches, such as crowns and rings, sold to raise funds for the poor.[2] He has Cersei and Margaery arrested due to accusations of infidelity and adultery.[7][8]

A Song of Ice and Fire

Our good High Septon was taken, the gods' own voice on earth, with a third of the Most Devout and near all our silent sisters.[21]

—Sefton to Duncan the Tall regarding the Great Spring Sickness

The High Septon speaks for the Seven here on earth. Strike at him, and you are striking at the gods themselves.[25]