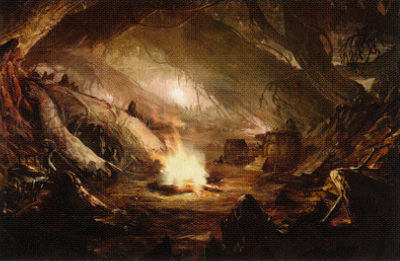 The hollow hill is a cave in the riverlands which serves as the hidden base of the brotherhood without banners.[1]

The walls of the cave consist of stone and soil interrupted by the huge roots of weirwoods. The hollow hill has numerous tunnels, crannies, and crevices. The brotherhood build a firepit which has stained the ceiling of the largest cavern. One section of the weirwood roots seems to form a stairway leading to where the brotherhood's leader, Lord Beric Dondarrion, rests in a tangle of roots. Men, women, and little children live within the cave. Its defenders call themselves the brotherhood without banners, the knights of the hollow hill, and the forgotten fellowship.[1] 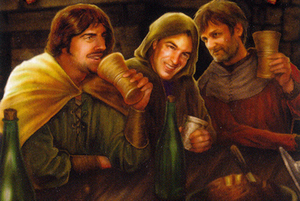 Harwin and other outlaws bring the blindfolded Arya Stark, Gendry, and Sandor Clegane to the hollow hill to meet Lord Beric Dondarrion. Arya is unable to tell how far the cave's tunnels extend. She is in attendance when Sandor kills Beric in a trial by combat, and then she witnesses Beric rise from the dead after Thoros of Myr provides the kiss of life.[1] The outlaws release Sandor a few miles from the hollow hill.[2]

While resting in a brewhouse after dispatching members of the Brave Companions, Gendry tells Beric that he would like to smith for the brotherhood. Beric decides to knight him as Ser Gendry, knight of the hollow hill.[2]

After rescuing Brienne of Tarth from Biter, the brotherhood bring her to meet Lady Stoneheart in a cave whose description resembles the hollow hill.[3]

Gendry: What is this place?
Lem: An old place, deep and secret. A refuge where neither wolves nor lions come prowling.[1]