House Baratheon of Dragonstone is a cadet branch of House Baratheon of Storm's End. Its seat is Dragonstone, the island castle that sits off the mainland to the northeast of King's Landing, and the Great House commands the allegiance of the lords of the narrow sea.[1] Its founder and current head is Lord Stannis Baratheon, who seized the island at the end of Robert's Rebellion and received it as a reward from his brother, King Robert I Baratheon.

House Baratheon of Dragonstone was formed in 284 AC after Robert's Rebellion when the new king, Robert I Baratheon, named his younger brother, Stannis, Lord of Dragonstone.[2] Stannis took the title as a slight,[3] since he would have preferred the richer lands of Storm's End, the ancestral Baratheon castle, but Robert wanted a strong leader in the old seat of House Targaryen. Robert instead awarded Storm's End to the youngest brother, Renly.[2]

Around 287 AC, Lord Stannis took Selyse Florent to wife. During Greyjoy's Rebellion in 289 AC, Stannis, as Robert's master of ships, led the Baratheon fleets to victory in a sea battle off Fair Isle. Since then Stannis and Selyse have conceived their daughter, Shireen, although their marriage remains loveless.

Lord Stannis Baratheon is the first to suspect that Queen Cersei Lannister's children are not also those of King Robert I Baratheon.[4] While investigating the matter with the Hand of the King, Lord Jon Arryn,[5] Stannis agrees to foster Jon's son, young Robert Arryn, on Dragonstone.[6] Neither this nor the moment of revealing the information to Robert Baratheon arrives, however. Lord Arryn is poisoned and Stannis retreats to Dragonstone shortly after the king leaves to offer the position of Hand to Eddard Stark, Lord of Winterfell.[7]

Before Stannis can return to King's Landing, King Robert dies and the realm poises for war. Stannis, his wife Selyse, and daughter Shireen are mentioned among the nobles that Cersei's eldest child, Joffrey I Baratheon, commands to do him fealty or be named traitors.[8] While Stannis's intentions are unknown, it is reported that he has been gathering ships, sellswords, and a shadowbinder to his island.[9] 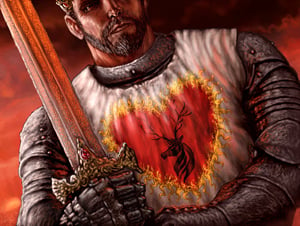 Sending letters throughout the realm, Stannis proclaims himself the rightful King of Westeros over Queen Cersei's baseborn abominations.[10] He is advised by Melisandre of Asshai, a red priestess of R'hllor, the Lord of Light. Originally, Stannis uses the crowned stag of the Baratheons as his sigil, but during the War of the Five Kings, he takes for his personal banner a crowned stag enclosed within a red heart surrounded by a blaze of orange fire on a field of sun yellow.[4]

Although the poor lands of Dragonstone allow for little support for his claim, the religion and magic of Melisandre has given focus to Stannis's cause, allowing for the assassination of his brother Renly and the defection of most of Renly's bannermen at Storm's End.[11][12]

The red religion has become a point of conflict among the house's sworn swords and lords bannermen, with its supporters and fervent believers labeled queen's men, and those who cleave to the Faith of the Seven called king's men. The house's subsequent contest against House Baratheon of King's Landing is denied in the Battle of the Blackwater,[13] and Ser Justin Massey and Ser Richard Horpe convince Stannis to retreat to Dragonstone.[14]

After the Blackwater, Stannis's total strength is between thirteen hundred[15] and fifteen hundred[16] men on Dragonstone (more than half of them Florents)[16] and three hundred men at Storm's End.[15]

Queen Selyse and Melisandre burn the traitors Guncer Sunglass, Alester Florent, and the sons of Hubard Rambton, sacrifices to the Lord of Light.[17][18]

The support of Selyse's family, House Florent, has been important for Stannis, but he resents their meddling. He travels to the Wall with most of his men and wins the battle beneath the Wall, beginning his campaign to win the north.[19] By this time Stannis has apparently joined his fiery heart sigil with the traditional banner of House Baratheon, a black stag on "a sheet of beaten gold".[20] 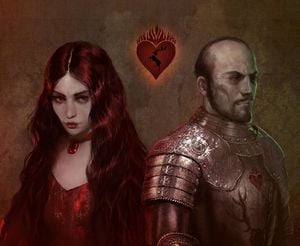 Lord Paxter Redwyne commands most of the Redwyne fleet at the siege of Dragonstone, which is held by Ser Rolland Storm on behalf of Stannis.[21] Ser Loras Tyrell, who takes command when the siege takes too long, is said to have been gravely wounded during his bloody conquest of Dragonstone.[22]

Lords Mace Tyrell and Mathis Rowan lead half of House Tyrell's strength to Storm's End, which is held by Ser Gilbert Farring for Stannis.[23] The rest of the Redwyne fleet blockade Shipbreaker Bay to prevent the castle from being resupplied.[21] Mace leaves this siege of Storm's End when he hears that his daughter, Queen Margaery, has been arrested by the High Sparrow.[24]

Stannis marches from Castle Black, enlists the aid of the northern mountain clans, and liberates Deepwood Motte from Asha Greyjoy's ironborn.[26] His march on Winterfell, which is held by House Bolton, is slowed in the wolfswood by a fierce blizzard.[27][28]

Queen Selyse remains at the Wall, where she engages in marrying her knights to various wildlings.[29] Ser Axell Florent calls himself the Queen's Hand.[30] Princess Shireen is intrigued by the giant at Castle Black, Wun Wun.[31]

House Baratheon of Dragonstone at the end of the third century

The known Baratheons of Dragonstone during the timespan of the events described in A Song of Ice and Fire are:

The King's captives and guests

The King's knights and sworn swords marching to Winterfell

The King's knights and sworn swords at Castle Black

The King's household at Dragonstone

The King's household at Storm's End

The King's bannermen at their seats

The King's men across the narrow sea