House Clegane is a house of landed knights in the westerlands. They hold fealty to House Lannister of Casterly Rock, and are among their primary bannermen.[1] Their lands are southeast of the Rock[2] and include a towerhouse, which, according to a semi-canon source, is named Clegane's Keep.[3] Their sigil depicts three dogs on a yellow field.[4] 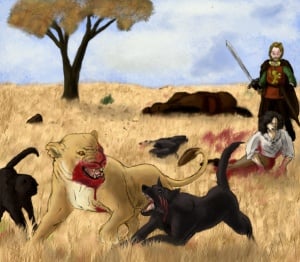 The first Clegane of House Clegane was kennelmaster at Casterly Rock. During one autumn year he saved Lord Tytos Lannister from a lioness, although he lost a leg and three dogs while doing so. Lord Tytos rewarded him with lands and a towerhouse. Ser Clegane's son was placed in Tytos's service as his squire. For his sigil Ser Clegane used the three dogs he lost saving Tytos, on the yellow of autumn grass.[5][4]

The kennelmaster's son, the father of Gregor and Sandor, died in a hunting accident. Their sister died young under queer circumstances.[6] Gregor is known for his unspeakable cruelty; this is mirrored in the Mountain's men, who casually commit atrocities during their campaigns. Sandor was driven away by this behavior, taking service with House Lannister and refusing to take a knight's vows to avoid association with his elder. 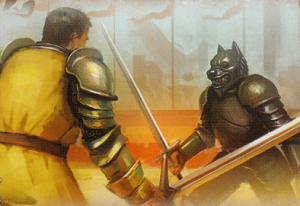 Sandor Clegane, known as the Hound, accompanies the royal party to Winterfell when King Robert I Baratheon offers Lord Eddard Stark the position of Hand of the King. On the return journey, Sandor kills Mycah, the butcher's boy whom Prince Joffrey Baratheon claims struck him.

During the Hand's tourney, Sandor defends Ser Loras Tyrell against his brother, Ser Gregor Clegane, when the Mountain tries to kill Loras for riding a mare in heat. In gratitude, Loras cedes the final round and the tourney purse to Sandor.

Lord Tywin Lannister sends Gregor to raid the riverlands, slaughtering the smallfolk of Sherrer, Wendish Town, and the Mummer's Ford. In retribution, Lord Beric Dondarrion is sent to kill Gregor, who ambushes Beric's party in a battle at the Mummer's Ford. Gregor also attacks Pinkmaiden and Stone Hedge.[7]

Gregor commands the left and the vanguard of the Lannister army in the battle on the Green Fork.[5]

After the dismissal of Ser Barristan Selmy, Sandor is made a brother of Joffrey's Kingsguard, though he refuses to take a knight's vows. 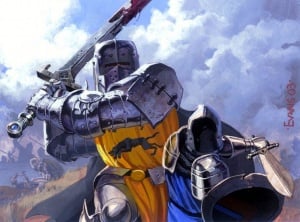 Ser Gregor Clegane vs a knight of normal stature during a battle. - by artist Mark Evans. © Fantasy Flight Games

Gregor and his troops perpetrate the sack of Darry. The Mountain's men capture Arya Stark and her companions, although they are not aware of her identity. Gregor skirmishes continuously with Beric Dondarrion's brotherhood without banners.

Joffrey's sending the Hound against the crowd sparks the riot of King's Landing. Sandor is at first thought dead along with Sansa Stark, but he returns with the girl in tow.

Gregor makes progress during the Battle of the Fords, but he is thrown back by Ser Edmure Tully at the Stone Mill.

During the Battle of the Blackwater, Sandor flees the wildfire-covered battlefield. He offers to take Sansa from the Red Keep, but she refuses to leave. 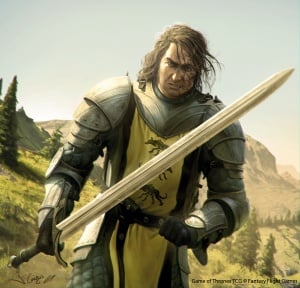 When Randyll Tarly repulses the northmen during the battle at Duskendale, their retreat is cut off by Gregor's forces. When Lord Roose Bolton leaves Harrenhal to march north to the Twins for the wedding of Lord Edmure Tully, Gregor attacks Roose's rearguard in the fighting at the fords of the Trident.[8] He eventually seizes the ruby ford and leads the capture of Harrenhal.[9]

Sandor is caught by the brotherhood without banners and brought to the hollow hill. He defeats Beric Dondarrion in a trial by combat and is allowed to leave. Sandor later captures Arya Stark and intends to ransom her to her brother, King Robb Stark, at the Twins, but his efforts are ruined by the Red Wedding. He then tries to ransom Arya to her aunt, Lady Lysa Arryn, at the Eyrie, but they are unable to pass the Mountains of the Moon. Injuries that Sandor receives in fighting Polliver and the Tickler at the inn at the crossroads later become infected; Arya refuses him the gift of mercy and leaves him to die near Saltpans.

In Tyrion Lannister's trial by combat for the murder of King Joffrey I Baratheon, Gregor is named the royal champion. Against him stands Prince Oberyn Martell, brother of the princess he slew during Robert's Rebellion, Elia Martell. Gregor barely manages to defeat Oberyn.

Gregor suffers a tortuous death from the poison the Red Viper had used during their duel.

The Elder Brother of the Quiet Isle tells Brienne of Tarth that the Hound is dead and that he buried his helm, although Brienne sees a large gravedigger on the isle.[10]

Sandor is charged with the murder of an old septon and a young girl pledged to the Faith of the Seven during the raid on Saltpans. However, it was actually Rorge wearing Sandor's hound helm. After Rorge and Biter are killed at the crossroads, Lem takes the helm.[11]

Gregor's head is sent to Doran Martell, Prince of Dorne.[12]

One of the Mountain's Men, Rafford, is killed by Arya Stark in Braavos.[13]

House Clegane at the end of the third century 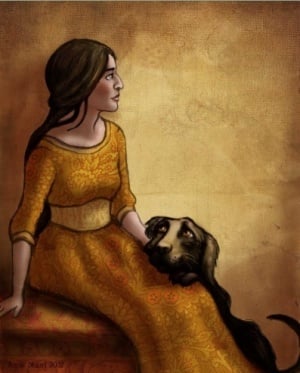 The unnamed sister of Gregor and Sandor Clegane – by Heliotropa ©

The known Cleganes during the timespan of the events described in A Song of Ice and Fire are:

Gregor's men are known as the Mountain's men and include: