Their blazon shows two griffins combatant counterchanged per pale on red and white.[2][3] Their motto is unknown, though their traditional battle cry is A griffin! A griffin![1]

An old house,[N 1] the Conningtons were a significantly wealthy House during the rule of House Targaryen.[7][1] Ser Alyn Connington was an exalted Lord Commander of the Kingsguard.[8]

During the First Dornish War, Lord Connington was killed by Dornish assassins while hunting.[9] The fourth son of the ruling Lord Connington joined Prince Aegon the Uncrowned's forces in his campaign against his uncle King Maegor the Cruel and fought for him in the Battle Beneath the Gods Eye.[10]

Lord Kyle Connington was a guest at the Golden Wedding.[11] The young Lord Roy Connington became a companion of Princess Saera Targaryen during his stay at court. After being involved in a sexual scandal, Roy was condemned to a ten-year exile from Westeros by Saera's father, King Jaehaerys I Targaryen. Roy died shortly before the end of his sentence, however.[4]

With the death of Lord Borros Baratheon during the Dance of the Dragons and his heir being an infant, the Stormlands became vulnerable to Dornish incursions. Borros's widow, Lady Elenda Baratheon, married Ser Steffon Connington hoping the fierce warrior would fight off the Dornishmen and bring stability to the region.[12] Steffon was slain by Wyland Wyl, however.[13]

Lord Armond Connington always desired land, and he once sought assistance from Prince Rhaegar Targaryen regarding a dispute with Lord Morrigen.[1] The White Book entry on Barristan Selmy records how he defeated Armond's son, Lord Jon Connington, in a tourney at Storm's End. Ashara Dayne danced with Jon at the tourney at Harrenhal.[14] 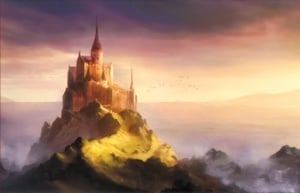 Griffin's Roost is the seat of House Connington. © FFG

Jon was later named Hand of the King by the Mad King, Aerys II Targaryen. The previous Hand, Owen Merryweather, had been exiled for his failure to face Robert's Rebellion, and Lord Connington was a noted warrior of proven loyalty, being one of Prince Rhaegar's best friends. During the Battle of the Bells at Stoney Sept,[15] Jon wounded Lord Hoster Tully and killed Ser Denys Arryn, the Darling of the Vale, with an axe.[16] After being defeated by the rebels at Stoney Sept, Jon was stripped of his lands and sent into exile in the Free Cities, where he is said to have drank himself to death.[7]

Aerys allowed the Connington lands to remain with Jon's cousin, Ronald Connington, the castellan of Griffin's Roost,[1] but Ronald joined the rebellion after the Battle of the Trident.[7] When Robert Baratheon was crowned king after the death of Aerys, he allowed Ronald to keep Griffin's Roost, but the Conningtons lost their lordship and nine-tenths of their land was distributed among neighbors who were more fervent in their support of Robert.[1] House Connington's status thus fell from being a full noble house to landed knights.[7]

Through the initiative of Ronald, his son Ronnet was betrothed when he was sixteen to twelve-year-old Brienne of Tarth. Ronnet rejected her when he met her, however, as he did not find Brienne attractive.[7] Ronnet now rules as the Knight of Griffin's Roost.

Lady Catelyn Stark sees Ser Ronnet Connington, a helmetless red-bearded man with a griffin on his shield, falling to Brienne of Tarth during the melee at Bitterbridge.[2] After riding for Renly Baratheon, Ronnet turns to Stannis Baratheon, and fights for him in the Battle of the Blackwater. He is made prisoner and bends the knee to King Joffrey Baratheon.[17]

Brienne remembers the day she was presented to Ronnet Connington, who refused to marry her for being too ugly. He gave her a rose, saying that that was all she was going to get from him.[19] In a dream, Brienne chops off Ronnet's hand when he offers her the rose.[20]

Red Ronnet, the Knight of Griffin's Roost, is part of Ser Jaime Lannister's army assembled in King's Landing to resolve the siege of Riverrun. At Harrenhal, Jaime punches Ronnet with his golden hand for speaking of Brienne without due respect. Jaime sends Ronnet to deliver Ser Wylis Manderly to Maidenpool so that he does not have to look at him anymore.[7]

Despite rumors that he drank himself to death in Essos, Jon Connington is revealed to be alive, having gone into hiding under the alias "Griff" with the help of Varys. He has raised Aegon Targaryen, the son of his friend Prince Rhaegar Targaryen, with the hope of one day placing him on the Iron Throne.[21][22] Jon and his companions are attacked by stone men in Chroyane while traveling via barge down the River Rhoyne. Jon contracts greyscale during the ambush while saving Tyrion Lannister.[22][5]

After returning to King's Landing from Maidenpool, Ronnet wants to prove his loyalty to King Tommen I Baratheon and vows to bring the head of his uncle Jon to Tommen's small council. Ser Kevan Lannister, the regent for Tommen, keeps Ronnet under guard in King's Landing for the time being.[6]

House Connington at the end of the third century

The known Conningtons during the timespan of the events described in A Song of Ice and Fire are:

Cousins of the "main" branch:

The heraldry of House Connington is one of George R. R. Martin's favorites.[25]