House Darry of Darry is a noble house from Castle Darry in the riverlands. Historically it had been one of the more prominent and powerful houses of the Trident, until the fall of the Targaryens in Robert's Rebellion. Their blazon is a black plowman on brown;[1] the central building where the Darrys have their apartments is called the Plowman's Keep.[2] Their words do not appear in the books.

House Darry traces their rule to the days when the Andals cast down the First Men.[2] During the coming of the Andals, three sons of Lord Darry held back the Andals of Vorian Vypren at the Widow's Ford before being slain.[3] 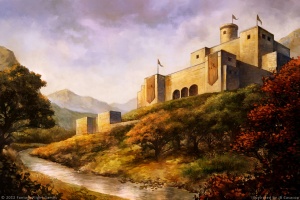 House Darry supported Rhaenyra Targaryen during the Dance of the Dragons. The Darrys helped to capture Stone Hedge,[6] but Ser Criston Cole later defeated Lord Darry, Lord Roote, and Ser Oswald Wode along the Gods Eye.[7] Prince Aemond Targaryen had his dragon, Vhagar, burn Castle Darry and the surrounding fields. Lady Darry and her younger children survived below the keep, but Lord Darry and his heir were killed on the battlements.[7] Lord Derrick Darry participated in the Second Battle of Tumbleton,[8] and Lord Roland Darry was slain by Lord Borros Baratheon in the Battle of the Kingsroad.[9]

During the regency of Aegon III, Ser Damon Darry and Ser Regis Groves marched to subdue Alys Rivers's rabble at Harrenhal. Damon was forced to flee back to Darry after Regis was slain.[10] Rosamund Darry attended the Maiden's Day Ball in King's Landing.[11] Darrys participated in Ser Robert Rowan's host which supported Ser Joffrey Arryn in the Vale.[12]

The Darrys were Targaryen loyalists, supporting King Daeron II Targaryen over the Daemon I Blackfyre in the First Blackfyre Rebellion. Lord Darry destroyed the black dragon sign of the Clanking Dragon, as he saw in it the sigil of House Blackfyre.[13]

Ser Desmond Darry participated in the tourney at Ashford Meadow in 209 AC,[14] his arms identified by Ser Duncan the Tall among the gathered attendees heraldry at the tourney.[15]

The Demon of Darry became Lord Commander of the Kingsguard.[16] The song of Lord Deremond at the Bloody Meadow may be about a Lord of Darry.[17]

Norbert Vance squired together with Brynden Tully for the Lord Darry of their time.[18]

During the reign of King Aerys II Targaryen, Ser Willem Darry was master-at-arms of the Red Keep. When Rhaegar Targaryen, Prince of Dragonstone, decided that he wanted to be a warrior, he asked Willem to provide him sword and armor.[19] Ser Jonothor Darry was a member of Aerys II's Kingsguard.[16]

During Robert's Rebellion, the Darrys defended King Aerys II Targaryen against Robert Baratheon, Lord of Storm's End, and their liege, Hoster Tully, Lord Paramount of the Trident.[20] After the Battle of the Bells, Ser Jonothor Darry and Ser Barristan Selmy of the Kingsguard were sent to Stoney Sept to rally remants of the loyalist army of Jon Connington, Lord of Griffin's Roost.[21]

Ser Raymun Darry lost his three older brothers at the Battle of the Trident.[22] Ser Willem Darry and four loyal men smuggled Aerys's surviving children, Prince Viserys and Princess Daenerys Targaryen, to Braavos before the assault on Dragonstone by Stannis Baratheon.[23] The defeat of the Targaryens cost the Darrys half of their lands, most of their wealth, and almost all their power.[24] 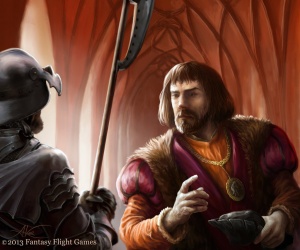 House Darry is among the houses that the exiled Viserys Targaryen believes will rise for him if he lands in Westeros.[23]

During the hunt for Arya Stark and Mycah, King Robert I Baratheon and his party stay at Castle Darry with the castle's lord, Ser Raymun Darry.[22]

Ser Raymun is summoned with all his strength to Riverrun by Ser Edmure Tully. Meanwhile, Ser Gregor Clegane and his men raid the riverlands. Hoster Tully, Lord Paramount of the Trident sends Raymun with Ser Marq Piper and Ser Karyl Vance to report the incident to the Iron Throne.[25]

Raymun is part of the expedition commanded by Beric Dondarrion, Lord of Blackhaven, to kill Gregor. The party is ambushed by Gregor and House Lannister, however, and Raymun is killed in the battle at the Mummer's Ford.[26]

After Robb Stark's victory at the Battle of the Camps, Marq and Karyl arrive at Riverrun with Raymun's son, the young Lyman Darry, the new Lord Darry. Lyman attends the council at Riverrun where Robb is proclaimed King in the North. Lyman assures that he will never call a Lannister his king.[27]

Little Walder Frey quarters his shield to depict in one quarter the Darry plowman of his mother's house.[1]

When Robb, King of the Trident, gives leave to the river lords to return to their castles, Lyman returns to Darry. Just after he arrives, Gregor returns and kills Lyman and all his garrison. Lyman was only eight, and the last trueborn heir of Darry through the male line.[28]

Catelyn Stark sees Darry men with the other river lords near Riverrun prior to the Battle of the Fords.[29]

The Lannister garrison eventually surrenders to Ser Helman Tallhart in the siege of Darry. Roose Bolton, Lord of the Dreadfort, sends word to Helman from Harrenhal that Robb has ordered the surrendered garrison to be executed and for Helman to put the castle to the torch and leave.[30]

After the Battle of the Blackwater, King Joffrey I Baratheon awards Ser Lancel Lannister the lands, castle and rights of House Darry, creating House Lannister of Darry. This lordship is given in favor of a living bastard Darry cousin.[30] The move is arranged by Lord Tywin Lannister to thank his loyal brother, Ser Kevan, who is Lancel's father.[31]

Darry men are left lordless and lawless during the War of the Five Kings.[21]

Tom of Sevenstreams accuses Sandor Clegane of the deaths of Raymun and Lyman Darry, although both were killed by his brother, Gregor.[32][N 1]

Merrett Frey thinks that his marriage with Mariya Darry, the daughter of Lord Darry, was unfortunate, as the Darrys lost all their prominence after Robert's Rebellion.[24]

Because Castle Darry was occupied by broken men after the northmen's departure, Ser Kevan Lannister sends Ser Harwyn Plumm, called the Hardstone, to expel them.[33]

Kevan marries his son Lancel to Amerei Frey, the eldest daughter of the female heir to Darry, to strengthen his claim over the Darry lands.[31] She brings to Darry a score of Freys, including her Darry-born mother, Mariya, one sister, and some uncles and cousins. Probably after Kevan's recommendation, Lancel quarters his Lannister lion with the Darry plowman in the arms of House Lannister of Darry. Kevan helps Lancel to rebuild Darry, but departs soon due to disagreements with his son and his new religious zeal.[2]

Jaime and his company spend a night at Castle Darry on their way to the siege of Riverrun. Jaime recalls that as King Robert's party journeyed north to Winterfell, Jaime and his brother Tyrion discovered hidden tapestries of the Targaryen kings at Castle Darry, uncovering that the Darrys were still Targaryen loyalists.[2] Genna Lannister complains that Darry, though smaller, is a safer place than Riverrun and would have preferred it for her spouse Emmon Frey, since the male line of the Darrys is already extinguished.[34]

While discussing the graves of dead soldiers who have washed up on the Quiet Isle, the Elder Brother says that Darry and Frey men are buried side by side.[35]

House Darry at the end of the third century

The known Darrys during the timespan of the events described in A Song of Ice and Fire are:

With unspecified familiar relationship to the main branch of the house there is also: