House Dayne of Starfall is a noble house from Starfall in Dorne. They are among the principal houses sworn to House Martell.[1] The Sword of the Morning is a title given to a Dayne knight who is considered worthy of wielding the greatsword Dawn, a blade said to be created from the heart of falling star. Their blazon is a white sword and a falling star, crossing on a lavender background.[2] A cadet branch of the family are the Daynes of High Hermitage.

The Daynes, who originate in the western Red Mountains,[3] would be considered "stony" Dornishmen by Daeron II Targaryen.[4] Their hair has been described as pale blond (Edric), dark (Ashara), and silver with a streak of black (Gerold). Daynes have been observed with dark blue (Edric) or purple eyes (Ashara and Gerold). Their purple eyes do not necessarily indicate Valyrian descent according to George R. R. Martin.[5] 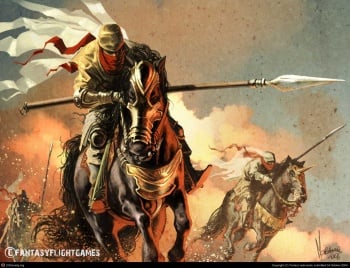 House Dayne is one of the most ancient houses in the Seven Kingdoms, claiming First Men ancestry[6] dating back ten thousand years to the dawn of days.[7] The first Dayne is said to have raised Starfall on an island at the mouth of the Torrentine, having tracked a falling star there and found a stone of magical powers. His descendants became Kings of the Torrentine and Lords of Starfall.[6] Along with the Fowlers and Yronwoods, the Daynes were among the most powerful and prestigious houses of ancient Dorne.[6] The Daynes are also famed for Dawn, their ancestral sword made from the fallen star, and the men who wield it, the Swords of the Morning.[8]

The Daynes have taken part in many conflicts between Dorne and the Reach, including battles against House Oakheart.[7] King Samwell Dayne, called the Starfire, once burned Oldtown.[9]

The last Dayne King, Vorian, known as the Sword of the Evening, was defeated in Nymeria's War and sent to the Wall. Afterwards the Daynes supported Nymeria against King Yorick V Yronwood. Nymeria's third husband was Ser Davos Dayne, the Sword of the Morning. Nymeria, Princess of Dorne, was later succeeded by her eldest daughter by her first husband, Mors Martell, not her son by Davos.[10]

In 10 AC during the First Dornish War, Ser Joffrey Dayne led a Dornish army to the walls of Oldtown, razing the fields and villages outside it.[11] Queen Visenya Targaryen retaliated by burning Starfall with Vhagar.[12]

In 47 AC Lady Clarisse Dayne was suggested as a potential wife for King Maegor I Targaryen. Grand Maester Benifer wanted to detach Starfall from Dorne, which was then still independent from the Seven Kingdoms.[13]

Ulrick Dayne, a Sword of the Morning, was considered an exceptional knight by Ser Eustace Osgrey, comparable as a swordsman to Daemon I Blackfyre and Prince Aemon the Dragonknight.[14] Dyanna Dayne, who died before her husband became King Maekar I Targaryen, was the mother of Maester Aemon and King Aegon V Targaryen.[15] 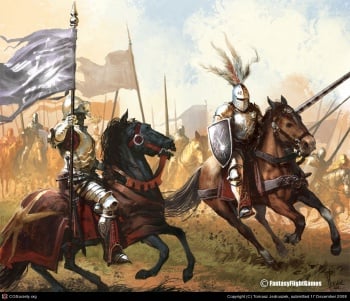 While journeying to Casterly Rock for the possible brokerage of their marriages, Prince Oberyn Martell and Princess Elia Martell visited Starfall.[16] Elia, who eventually married Prince Rhaegar Targaryen,[17] had the beautiful Lady Ashara Dayne as one of her companions.[18]

Ashara's brother was Ser Arthur Dayne, the Sword of the Morning and the deadliest knight in the Kingsguard of Aerys II Targaryen.[19] Arthur led the campaign against the Kingswood Brotherhood, winning over the smallfolk of the forest and rooting out the bandits.[20] During the climactic skirmish, Arthur killed the psychotic Smiling Knight in a duel.[21] Arthur also knighted Jaime Lannister on the battlefield.[22] Arthur broke twelve lances against his good friend, Rhaegar, in a tourney at Storm's End.[23]

At the great tourney at Harrenhal, Ashara danced with Lord Jon Connington, Eddard Stark, and a member of the Kingsguard.[24] In the jousting, Arthur lost to Prince Rhaegar, the eventual champion.[25] Ser Barristan Selmy was infatuated with Ashara, and he planned to name her queen of love and beauty if he won the tourney.[18] According to Allyria Dayne, Ashara fell in love with Eddard at Harrenhal.[26]

In the aftermath of Robert's Rebellion, Arthur died at the tower of joy, slain in single combat by Eddard.[19] Afterward, Lord Stark returned Arthur's famous sword, Dawn, to Starfall and informed Ashara of her brother's death.[19][26] Ashara threw herself into the Summer Sea from the Palestone Sword of Starfall, although her body was never recovered.[27] Many believe Ashara or Starfall's wet-nurse, Wylla, to be the mother of Eddard's bastard, Jon Snow.[19][28][26]

Edric Dayne, the current Lord of Starfall, is the nephew of Arthur. Edric was sent to squire for Beric Dondarrion after the betrothal of the Lord of Blackhaven to Edric's aunt, Allyria.[29][26]

While at King's Landing, Lord Eddard Stark has a fevered dream involving Arthur at the tower of joy.[30]

Bran Stark recalls that Arthur, the Sword of the Morning, was the finest knight ever seen by his father, Eddard.[31] 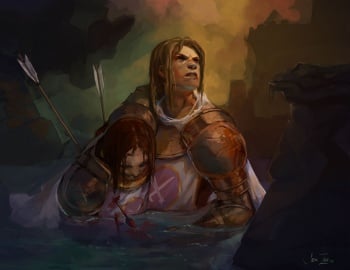 Fallen and Reborn by Jen Zee ©

Daenerys Targaryen discusses Arthur with Arstan Whitebeard; Viserys Targaryen had told her that Arthur was the only knight in the realm who was the peer of their brother Rhaegar, Prince of Dragonstone.[32]

Traveling through the riverlands, Arya Stark meets the brotherhood without banners. She learns that Lord Edric Dayne accompanied Lord Beric Dondarrion in his mission to bring Ser Gregor Clegane to justice. When their band was ambushed at the Mummer's Ford, Beric was killed. Edric defended his body, however, allowing it to be recovered and later accidentally revived by Thoros of Myr. Edric has accompanied his fellow survivors, constituting an outlaw fellowship dedicated to guarding the smallfolk of the riverlands from the cruelties of war.[26]

Princess Arianne Martell enlists Ser Gerold Dayne of the High Hermitage branch for her plot to crown Myrcella Baratheon. Gerold, called Darkstar, resents that he is not regarded as highly as Arthur, the Sword of the Morning. When Arianne's plan collapses at the Greenblood, Gerold wounds Myrcella and flees.[7][33]

When Lady Stoneheart takes command of the brotherhood without banners after Beric dies his final death, Edric and a group of others leave the brotherhood. Their whereabouts are unknown.[34][35]

Ser Barristan Selmy counts his loss to Prince Rhaegar in the tourney at Harrenhal, and the war that resulted from the prince's actions thereafter, to be his greatest failure. Barristan wanted to name Ashara queen of love and beauty if he won the tourney, but the victorious Rhaegar chose Lyanna Stark instead of his own wife, Elia Martell.[18]

House Dayne at the end of the third century 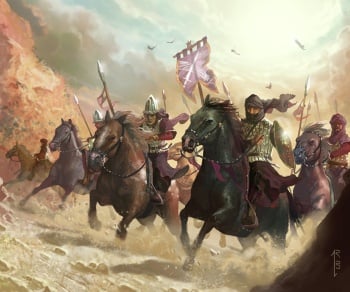 The known Daynes during the timespan of the events described in A Song of Ice and Fire are:

The wielder of Dawn is always given the title of Sword of the Morning, and only a knight of House Dayne who is deemed worthy can carry it.[8]

House Dayne may be a reference by George R. R. Martin to Dane Whitman, a comic book superhero known as the Black Knight and the wielder of the Ebony Blade, a sword carved from a fallen meteor.