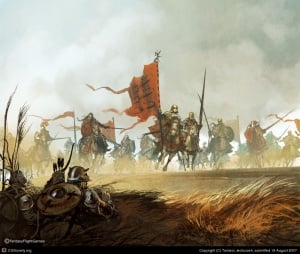 House Qorgyle of Sandstone is a noble house from Sandstone, located in the dunes of western Dorne. They are among the principal bannermen sworn to House Martell of Sunspear.[1][3]

Their arms are three black scorpions over red.[4][5]

Coming of the Andals

The Qorgyles were adventuring Andals who established their domains in the unexplored Dornish deserts, settling in the deep dunes and sands of Dorne, fortifying the only well for fifty leagues around.[2]

By the time of Nymeria's War, the Qorgyles were bannermen of House Yronwood. The Qorgyles supported King Yorick V Yronwood in his unsuccessful war against Lord Mors Martell and Princess Nymeria. Following the war, the Qorgyles became vassals of House Martell.[6]

When King Aegon I Targaryen attempted to conquer Dorne in the First Dornish War, House Qorgyle never submitted to House Targaryen and Qorgyle spearmen cut down Lord Harlen Tyrell's foragers whenever they ventured to far west. In 9 AC, Sandstone was among the Dornish castles burned by the dragons of Aegon the Conqueror and Queen Visenya Targaryen.[7]

During the Maiden's Day Ball in 133 AC, Moriah Qorgyle was presented to King Aegon III Targaryen as a potential bride, boldly requesting for the king to kiss her, though Aegon III did not respond.[8]

During King Daeron I Targaryen's conquest of Dorne, Lord Lyonel Tyrell was tasked with ensuring the submission of the Dornishmen. Lord Qorgyle proved loyal by quelling the revolts of one of the more notorious rebel lords.[9] However, while staying at Sandstone, Lord Tyrell was murdered in a bed of scorpions.[10] Maester Gareth suggests in his Red Sands that Lord Qorgyle arranged Lord Tyrell's murder, though his motives were the subject of speculation. Some say he was slighted that his earlier show of loyalty was given little consideration by Lord Tyrell, while others claim his initial support was part of a treacherous plan he made with his castellan to earn the king and Lord Tyrell's trust.[9]

Prince Oberyn Martell was fostered at Sandstone as a child.[13]

Ser Arron Qorgyle is part of the escort of distinguished Dornish nobles that accompany Prince Oberyn Martell to King's Landing.[4]

Arianne Martell believes that House Qorgyle will aid her attempt to crown Princess Myrcella Baratheon due to its relationship with Prince Oberyn.[13]

House Qorgyle at the end of the third century

The known Qorgyles during the timespan of the events described in A Song of Ice and Fire are: