House of the Undying 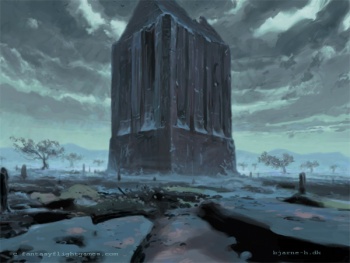 House of the Undying, by Bjarne Hansen © Fantasy Flight Games

The House of the Undying is a grey and ancient stone ruin which stands with no other buildings near. It is long and low, without towers or windows and is coiled like a stone serpent through a grove of black-barked trees the leaves of which are used to make shade of the evening. Black tiles cover the palace's roof, many of them fallen or broken, and the mortar between its stones is dry and crumbling. The building does not appear to have any towers.[3]

The palace's door is a tall oval mouth set in a wall fashioned in the likeness of a human face. Before entering, a person seeking audience with the Undying must drink shade of the evening, so that they may "hear and see the truths" that will be laid before them.[3] 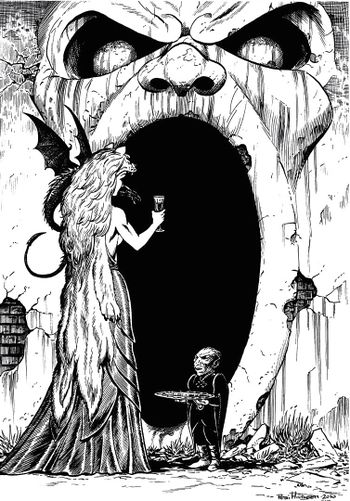 Daenerys takes a glass of shade of the evening from a servitor at the House of the Undying. By Petri Hiltunen for the Finnish edition of A Clash of Kings. © Kirjava

Following the suggestion of Pyat Pree, Daenerys Targaryen seeks the Undying Ones' counsel at their residence, the House of the Undying. Ser Jorah Mormont and her bloodriders want to accompany Daenerys inside, but Pyat insist she must enter alone. The warlock explains that the front way leads in, but not out again. When Daenerys enters, there will be four doors; the door she just came through and three others. To reach the Undying, she must always take the first door on the right and always takes stairs up. She must not enter any room until reaching the audience chamber. When leaving, Daenerys is to follow the same path as before; always the first door to the right and always up the stairs.[3]

Daenerys enters after drinking shade of the evening from a slender crystal glass provided by a dwarf servitor. Accompanied only by Drogon, one of her young dragons, she follows Pyat's directions in the first few oval rooms which have four doors. The fourth room, however, is square with six passages. When she takes the rightmost passage, she enters a long torch-lit hallway with seemingly-endless doors only to the left. Some of the doors are open, and Daenerys sees various visions when she looks through them. The hallway ends with a staircase which heads downward instead of upward. The torches begin to go out and Daenerys thinks she hears something approaching her. Thinking that the first door on the right is the last door on the left, the terrified girl enters the last door before the stairs and then passes through numerous small rooms, continuing to follow Pyat's instructions. The warlock appears and entreats her to follow, but Daenerys ignores him, goes through a door to the right, and climbs a long staircase. Atop the stairs are wide doors of ebony and weirwood decorated in interwoven patterns, behind which is a great hall of elaborately-dressed wizards, both male and female. Ignoring them, Daenerys finds a hidden door of old grey wood to the right.[3]

Daenerys finds herself in a gloomy chamber. A long stone table fills the room, above which floats a rotting human heart, swollen and blue with corruption. Indigo light pulses out with each deep, throbbing beat. The Undying Ones which are seated at the table appear to be dead, but Daenerys hears whispered echoes. The Undying call her "mother of dragons" and "child of three" and tell her some prophesies, saying "three fires must you light... one for life and one for death and one to love... three mounts must you ride... one to bed and one to dread and one to love... three treasons will you know... once for blood and once for gold and once for love..."[3]

Daenerys then sees a number of visions of past and future events; while she is distracted, the Undying Ones attempt to drain her life. Drogon tears apart the heart and burns the warlocks with dragonflame, however, allowing the girl to escape the blazing chamber. As she flees down a serpentine passageway, the floor seems to writhe slowly. Once Daenerys escapes outside, Jhogo and Rakharo prevent Pyat from stabbing her with a knife.[3] The House of the Undying collapses in a great gout of smoke and flame.[4]

Jhiqui follows Dothraki custom and fastens a bell in Daenerys's hair to mark her victory over the Undying.[4] Xaro Xhoan Daxos learns that Pyat Pree is gathering the surviving warlocks to work ill on Daenerys.[4]

After freeing the slaves of Yunkai, Daenerys recalls one of the visions she had in the House of the Undying.[5]

According to Xaro the Undying are all dead.[6] 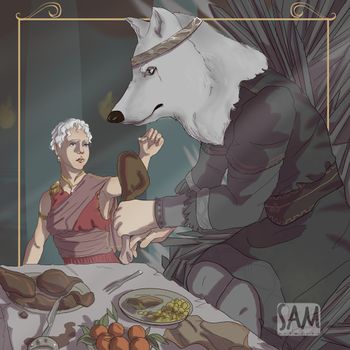 Daenerys sees a vision of a feast of corpses in the House of the Undying, by Samantha Altarozzi ©

The warlock Pyat Pree persuades Daenerys Targaryen to seek answers in the House of the Undying. In the long hall, she passes many rooms containing visions before she reaches the chamber of the Undying. The visions include:[3]

After reaching the gloomy chamber of the Undying Ones, Daenerys is also shown:[3]

Come with me to the House of the Undying, and you shall drink of truth and wisdom.[1]

Blood of my blood, this is an evil place, a haunt of ghosts and maegi. See how it drinks the morning sun? Let us go before it drinks us as well.[3]

Heed my words, my queen. The House of the Undying Ones was not made for mortal men. If you value your soul, take care and do just as I tell you.[3]

I am in the presence of sorcery.[3]

Daenerys: I have won no victories.
Jhiqui: You burned the maegi in their house of dust and sent their souls to hell.[4]