Incest is defined as a relationship between two persons commonly regarded as too closely related to marry. [1] 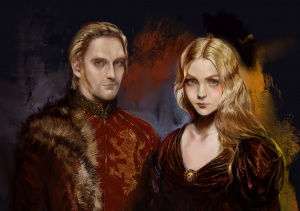 Incest in the Seven Kingdoms

The two main religions practiced in the Seven Kingdoms, the Faith of the Seven and the old gods, consider incest to be a vile sin.[2][3] However in Westeros incest is only applied if father lays with daughter, mother lays with son, or brother to sister, and the children of such unions are considered abominations.[4] In marriage customs, it is acceptable and in fact quite common among the nobility for first cousins to wed. Examples include Tywin and Joanna Lannister (first cousins),[5] Paxter Redwyne and Mina Tyrell (first cousins),[6] Viserys I Targaryen and Aemma Arryn (first cousins),[7] and Rickard and Lyarra Stark (first cousins once removed).[8] The exact degree of relations are unknown in the marriages of Jon and Rowena Arryn, Shella and Walter Whent,[9] Benfrey and Jyanna Frey,[10] and Alys and Jared Frey.[10] Further, a marriage has been proposed between Robert Arryn and Sansa Stark (first cousins),[11] to which the degree of common ancestry was not an objection.

The views regarding marriages between an uncle and a niece (or an aunt to a nephew) might differ between the Faith and the old gods. Although the High Septon protested against a possible marriage between Prince Maegor Targaryen and his niece Rhaena,[3][12] in the north, Serena Stark had been wed to her half-uncle, Edric, while her sister Sansa Stark had been wed to her half-uncle Jonnel Stark.[8][N 1]

The marriage of step-relations is a contentious issue in Westeros. When Lyonel Hightower announced his intention to marry his stepmother, Samantha Hightower, the High Septon forbade the union and deemed it a form of incest.[13] However, Lord Hightower kept Lady Sam as his paramour for thirteen years, fathering six children on her until the subsequent High Septon reversed his predecessor's decision and allowed the couple to marry.[13]

The only exception to condemnation of incest in Westeros is when it occurs in House Targaryen.[2] The Westerosi accepted the rule of Aegon I Targaryen following his Conquest, despite the fact that he was in an incestuous, polygamous marriage with both his sisters, Visenya and Rhaenys. The High Septon personally anointed the new king,[14] and Aegon remained closely allied with the Faith during his reign, but the Faith neither denounced nor endorsed Aegon's marriages.[15] When his son Aenys was wed in 22 AC to his cousin Alyssa Velaryon, no objections were raised. However, when a marriage was proposed between Aenys's brother, Maegor, and Aenys's daughter, Rhaena, the High Septon protested, preventing the marriage from taking place.[3][12]

In 41 AC, when Aenys wed his daughter Rhaena and son Aegon to one another, the Faith Militant uprising began. The High Septon sent Aenys a denunciation, addressing him as "King Abomination"; pious lords and smallfolk, who had once loved Aenys, turned against him.[3] The uprising lasted the remainder of Aenys's reign[3] and continued throughout the reign of King Maegor I Targaryen.[12] Peace between the Faith and the Crown was eventually reached during the reign of Jaehaerys I Targaryen with the Doctrine of Exceptionalism, which permitted incestuous marriages for Targaryens, as the Gods had made Valyrians differently from the Andals. It was made an official tenet of the faith by High Septon Alfyn and his successor.[16][17][18]

The Targaryens continued their incestuous marriages from the reign of King Jaehaerys I onwards. King Jaehaerys I married his younger sister Alysanne, although both their mother and stepfather tried to stop the relationship, as they feared the reaction of the pious of the realm.[19] Jaehaerys planned to marry his eldest son Aemon to his daughter Daenerys,[20] but after Daenerys died at a young age, Aemon was married to his half-aunt Jocelyn Baratheon instead. Jaehaerys further married his children Baelon and Alyssa to one another, and considered marrying his children Vaegon and Daella to one another. Once it became clear that Vaegon and Daella were far from an ideal match, Jaehaerys briefly considered his younger daughters Saera and Viserra as a bride for Vaegon.[21] King Aegon II Targaryen was wed to his sister Helaena Targaryen, King Baelor I Targaryen had been wed to his sister Daena (although the marriage was never consummated and Baelor had the marriage annulled upon ascending the throne), King Aegon IV was wed to his sister Naerys, Prince Aelor to his twin-sister Aelora, King Jaehaerys II Targaryen to his sister Shaera, and their son Aerys II Targaryen to his sister Rhaella.[7]

King Aegon V Targaryen, once betrothed to his own sister Daella,[22] became convinced that the incestuous marriage customs of House Targaryen were harmful. As such, Aegon and Queen Betha Blackwood betrothed four of their five children in 237 AC to sons and daughters of some of the Great Houses of the Seven Kingdoms. When his son Jaehaerys and daughter Shaera married in secret, Aegon was forced to accept the marriage.[23] Years later, based on the prophecy made by a woods witch, Jaehaerys commanded his son Aerys and daughter Rhaella to marry one another.[24] Whilst King Aegon V was frustrated by Jaehaerys's decision, he let his son have his way.[23]

Westerosi society tolerated incest only among the Targaryens. When the Targaryens were overthrown during Robert's Rebellion, their incest did not play a role. However, people would not have criticized King Robert I Baratheon executing his wife, Cersei Lannister, had he known that Cersei's brother Jaime Lannister was the father of Cersei's three children, not Robert.[2] During the War of the Five Kings Jaime considered that he could publicly marry Cersei, and Joffrey could marry his sister and Jaime's daughter Myrcella. He believed that, using military force, House Lannister could retain the Iron Throne despite the incest and prove to the realm that Lannisters were, like Targaryens, different from other people.[25]

Incest Beyond the Wall

The Free folk who live north of the Wall believe that marriage between brothers and sisters or parents and children offend the gods, who curse the children of such unions with being weak and sickly.[26] The wildlings generally try to find brides as far away from the lands of their clan kin as possible, believing that new blood will strengthen them and avoid inbreeding.[27]

The isolated wildling homesteader Craster has nineteen wives, many of whom are his own daughters - though other wildlings do not consider this normal or acceptable.[28]

In the Valyrian Freehold, it was custom among the dragonlords to marry brother to sister, or, if that was not possible, an uncle to a niece, or an aunt to a nephew.[3] However, this was not often practiced by those who were not from dragonrider families.[29]

Lord Stannis Baratheon, brother of King Robert I Baratheon, becomes suspicious about the paternity of Queen Cersei Lannister’s three children, Joffrey, Myrcella, and Tommen, believing they had not been fathered by her husband, King Robert I, but instead by her brother, Ser Jaime Lannister of the Kingsguard. He investigates the matter with Lord Jon Arryn, who discovers proof for Cersei’s infidelity. Before he can reveal the secret to the king, he dies.

When the king visits Winterfell with half his court, Bran Stark accidentally witnesses Queen Cersei and Ser Jaime having sex. In an attempt to keep their secret, Jaime throws Bran from the window of the tower they are in.[30]

In King's Landing, Lord Eddard Stark discovers Queen Cersei's secret. He informs Lord Petyr Baelish of the fact, but Baelish's reaction suggests he had been aware for some time already.[31] Eddard goes to confront Cersei, who confirms her relationship with Jaime.[32] When King Robert I dies, Eddard attempts to prevent Joffrey from taking the throne, but is betrayed, arrested, and subsequently executed.[33][34]

During his captivity, Eddard is visited by Varys, who reveals he was aware of the relationship between Cersei and Jaime.[35]

Before being presented to the Dothraki khal Drogo, Daenerys Targaryen recalls how she had always assumed that she would marry her brother Viserys once she came of age.[36]

Stannis Baratheon proclaims himself to be King on Dragonstone, and thereby lays claim to the Iron Throne.[37] He has his maester, Pylos, write numerous copies of a letter in which he proclaims Cersei’s three children to be the products of her incestuous relationship with her brother, Jaime.[38] These letters are send to the lords of the Seven Kingdoms, including the Red Keep in King’s Landing.[39]

While in captivity at Riverrun, Jaime Lannister confirms to Catelyn Stark that Joffrey, Myrcella, and Tommen are his biological children.[40]

At Craster's Keep, Gilly gives birth to her father's son.[41] She flees her father's keep with Samwell Tarly[42] and eventually reaches Castle Black with the child.[43]

Ser Kevan Lannister makes it clear to both Cersei[44] and Jaime[6] that he is aware of their relationship and the paternity of Cersei's children. As part of her plot to discredit Queen Margaery Tyrell, Dowager Queen Cersei Lannister has disgraced former maester Qyburn torture the Blue Bard into confessing how he witnessed Margaery having affairs with lovers. Among those accused he names Margaery’s brother, Ser Loras Tyrell. However, Cersei knows that the lie will not be believed, on account of Loras's sexual preferences, nor be taken kindly, following his recent military success at Dragonstone, and insists the Blue Bard changes his confession.[45]

When Stannis Baratheon discovers Gilly was not only Craster's daughter, but also his wife who gave birth to his son, he agrees to Jon Snow's plan to send Gilly south, stating he will not suffer "such abominations" at the Wall.[46]

Having been taken captive by the Faith, Dowager Queen Cersei Lannister is charged with multiple crimes, including incest. She denies to the High Septon that her children were fathered by her brother instead of her husband.[47] During her walk of atonement, the smallfolk call Cersei names, including "brotherfucker".[48]

Bastards were common enough, but incest was a monstrous sin to both old gods and the new, and the children of such wickedness were named abominations in sept and godswood alike. The dragonkings had wed brother to sister, but they were the blood of old Valyria where such practices had been common, and like their dragons the Targaryens answered to neither gods nor men.[2]