Jalabhar Xho, Prince of the Red Flower Vale, is an exiled prince from the Summer Isles residing in the Red Keep.[2]

Jalabhar has the dark skin and extravagant feather cape typical of Summer Islanders. The feathers of his own cape are green and scarlet.[3] He also owns another splendid cape of feathers, a plumage described as so extravagant and fantastic that he seemed like to take flight.[4]

He speaks both the Common Tongue and his native Summer Tongue.[5][6] Beneath his jewels and feathers, Cersei Lannister considers him to be little more than a highborn beggar.[7]

Jalabhar Xho is the exiled Prince of the Red Flower Vale,[8] likely exiled for losing a highly ritualized war as per the tradition of the Summer Isles.[9] Following his exile, Jalabhar came to King's Landing in the Seven Kingdoms to request gold and swords from King Robert I Baratheon to help him regain the Red Flower Vale. Robert always entertained the notion of conquering the Summer Isles, but continuously told Jalabhar and put it off until the next year. Although Robert always put off Jalabhar's request for help, he never firmly declined him, telling him "Next year" instead of "No".[7]

While Jalabhar continues to occasionally petition the Iron Throne to win back his seat,[7] he has become a noted courtier at King's Landing. Having no other place to seek refuge,[10] the exiled Prince of the Red Flower Vale is one of the most colorful figures at court alongside Thoros of Myr.[11] 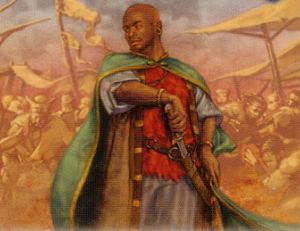 Jalabhar attends the Hand's tourney in King's Landing, his look frightening Jeyne Poole.[3] He and Ser Balon Swann get outshot by the commoner Anguy at a hundred paces in the final round of the archery competition.[12] After the death of King Robert I Baratheon, Jalabhar is among the score of nobles that attends King Joffrey I Baratheon's first court session in the Red Keep.[13]

Jalabhar attends the tourney on King Joffrey's name day in King's Landing, one of the few nobles to do so as the War of the Five Kings has broken out.[10] The prince is part of the procession that sees Princess Myrcella Baratheon off to Dorne. While returning to the Red Keep, the group is attacked by smallfolk as a riot breaks out in King's Landing. After the group narrowly returns to safety, Jalabhar believes he saw Ser Preston Greenfield of the Kingsguard ride back to futilely aid the High Septon, though he was not certain.[5]

Following the defeat of Stannis Baratheon at the Battle of the Blackwater, Jalabhar dresses splendidly for the following court session.[4]

Arya Stark remembers him as the most colorful figure at court, alongside the red priest Thoros of Myr.[11]

Jalabhar attends the wedding of Sansa Stark and Tyrion Lannister. After the ceremony, Jalabhar tells Sansa something in the Summer Tongue that she does not understand.[6] As part of Lord Tywin Lannister's orders, Jalabhar is part of the group that accompanies Tyrion to meet the delegation from Dorne, ensuring the Prince of Dorne is greeted by more notables aside from Tyrion.[2]

He is a guest at the wedding of King Joffrey and Queen Margaery Tyrell, giving Joffrey a great bow of golden wood and a quiver of arrows fletched with green and scarlet feathers.[14] After the ceremony, Jalabhar is among the nobles enjoying the unseasonable heat in the courtyard, where Sansa asks him about wedding customs in the Summer Isles.[14] 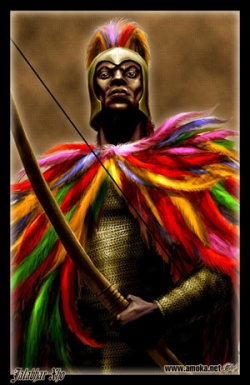 Jalabhar visits Queen Margaery often, teaching her and her handmaids the Summer Tongue[7] and attaches himself to her entourage.[15] He petitions the Iron Throne for aid in retaking his seat, the Red Flower Vale, but is put off by Queen Cersei Lannister.[16]

During his torture, the Blue Bard is forced to list those he claims to have been Queen Margaery's secret lovers; among them is Jalabhar.[17] Cersei has an arrest warrant signed for Jalabhar as part of her plans to remove Margaery, as well as getting rid of the prince, who she deems to be an annoying beggar.[18]

Jalabhar Xho is held with the rest of Margaery's falsely accused lovers in a dungeon under the charge of Qyburn.[19][20]

In Meereen, after Daenerys Targaryen refuses his offer of marriage, Prince Quentyn Martell recalls Jalabhar Xho; Quentyn thinks that apart from Daenerys, the rest of Meereen seems to see him as an amusing curiosity, just like Xho was seen at the court of King Robert.[21]

Beneath his jewels and feathers, Xho was little more than a wellborn beggar. Robert could have put an end to his importuning for good with one firm "No," but the notion of conquering the Summer Isles had appealed to her drunken lout of a husband.[7]

Splendid as he looked in his bright feather cloak, he had only come to beg.[16]